In PieceWork’s January/February 2010 issue, Barbara Plakans recounts the story of one of Latvia’s most revered mitten knitters, Jette Užāne.

During the 1980s, the knitting world’s fascination with stranded-colorwork mittens of Latvia was spurred by books such as Lizbeth Upitis’sLatvian Mittens: Traditional Designs & Techniques. In PieceWork’s January/February 2010 issue, Barbara Plakans recounts the story of one of Latvia’s most revered mitten knitters, Jette Užāne.

Jette Užāne [1924–2007] rarely left Lejnieki (Place down in the Valley), the farmstead that her parents built in the 1920s in the Dzērbene district of the Vidzeme countryside in rural northeastern Latvia. Jette, the second of six children, was born there during Latvia’s first independence period, and it was her home until her death.

When she was four years old, her grandmother noticed that Jette was bending over, holding her arms stiffly at her sides. A specialist in Riga diagnosed Pott’s disease, an old term for spinal tuberculosis that causes the spine to soften and collapse. Jette spent two years at the sanitarium at Krimulda but fell ill again at home before she could enter elementary school. Within a few days, she couldn’t move anything but her fingers. She was taken back to Krimulda, where she stayed until she was twelve, learning reading, writing, and basic sewing skills.

Back home but severely deformed, Jette was confined to a wheelchair for the rest of her life. Nonetheless, her mother soon gave her yarn and knitting needles and showed her how to cast on and turn a heel, saying, “Why are you sitting here without working? Knit something; the other children have bare feet.” After completing many pairs of socks, at age thirteen, Jette turned out her first pair of mittens. Soon, it took her only a day to knit a pair. She was knitting for everyone in the family as well as mending their clothes. 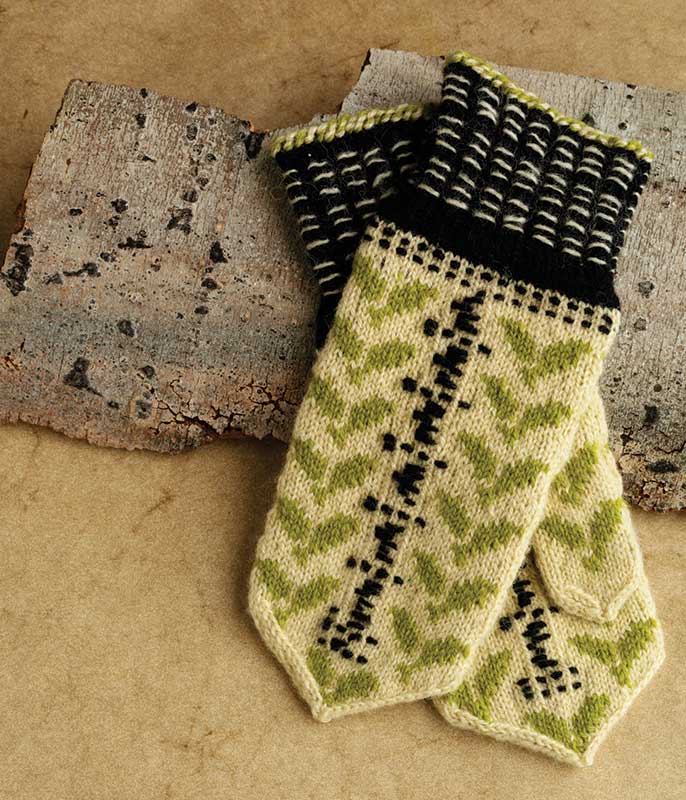 Her stern grandmother, whose sharp eyes had first spotted her affliction, received Jette’s first pair of mittens. As Jette tells it, “I created a special pair (with unusual cuffs) for my mother’s mother and expected her to praise me. ‘Well, aren’t they beautiful?’ I asked. Grandmother replied, ‘They are not yet beautiful, daughter. They are colorful.’ Then I said with a trembling voice through my tears, ‘Lukstiņmāte (Mother of Lukstiņa [her grandmother’s farmstead]), what do the mittens need to make them beautiful?’ Grandmother answered, ‘Beautiful, daughter, is only black, white, and gray.’ ” Undeterred, Jette continued to experiment with scavenged yarn and a set of five double-pointed wire needles (size 0 or smaller).

The custom in rural Latvia was for young women to prepare a dowry chest containing a variety of woven and knitted articles, including numerous pairs of mittens for members of the wedding party and future in-laws. In 1940 at age sixteen, Jette was asked to knit dozens of mittens for one of the farm’s serving girls. The girl’s fiancé, a wool dyer, provided Jette with a trunk filled with hand-dyed yarn in shades of red, yellow, green, and blue, a gift that she claimed placed her in seventh heaven.

Following the Second World War (1939–1945) and the occupation of Latvia by the Soviet Union, Jette’s mittens were exhibited at shows in Riga and Moscow. She also knitted a series of dolls in folk costumes. In 1960, she was awarded a Soviet honor, the Master of People’s Handcrafts.

As time passed, Jette’s siblings moved away. After her parents died, Jette remained on the farmstead and, with the help of caring neighbors, lived alone despite her limited mobility. When she was in her forties, she began to experiment more seriously with her own nontraditional knitted designs.

BARBARA PLAKANS lives in Ames, Iowa, where she enjoys knitting together her dual passions: words and fiber.