The Kurdish Socks of Iraq

What can a pair of socks reveal about the culture of a displaced and oppressed culture? In the Kurdish knitted stockings that she found in northern Iraq, Barb Sobkoviak saw pride in these works of folk art, tradition, and beauty.

The author's friend Fewjia with her family. Disrupted by decades of war in the region, the skills of handspinning and knitting extraordinary socks dwindled among her generation.

The beautiful pair of socks, hanging from a rusty hook at the entrance to the one-stall shop, dangled above the opened bags of rice, wheat, lentils, and beans offered for sale. The socks were off-white with a black-and-white design at the toe. I decided that when I returned to Michigan from northern Iraq, I would give them as a gift to my sister. Gifts were hard to find in the post–Gulf War Iraq of 1992. Beyond the profit that they would bring him, the shopkeeper was delighted that I bought them. As a proud Kurd who loved his people, he appreciated the interest that I, a foreigner, had in these Kurdish socks. With wool shorn from the family’s sheep, handspun by one of his relatives, and knitted in a traditional Kurdish design, they were authentically Kurdish. After years of repression by the regime of Saddam Hussein (1937–2006), all Kurds, including this shopkeeper, loved those things that still stood for traditional Kurdish culture, as did I. 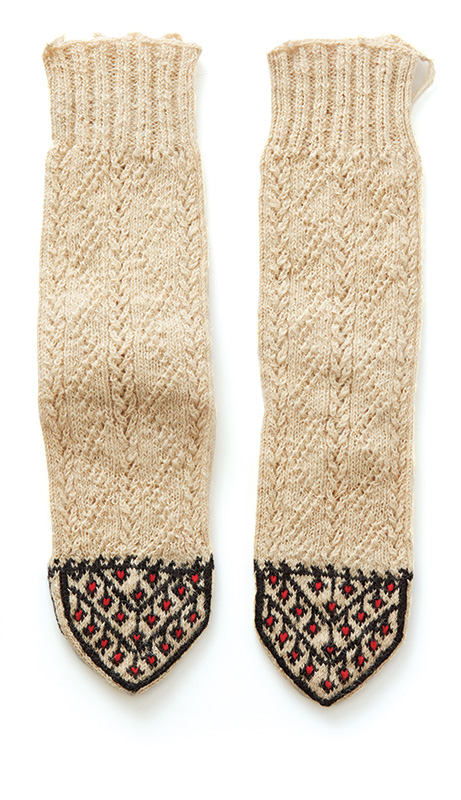 I had come to northern Iraq in 1991 to help in Kurdish refugee camps. I stayed in Iraq for six years, working at the local hospital and becoming involved in other development projects in the towns and villages in the corner of Iraq where the border touches Turkey and Syria. I quickly grew to love these hospitable, generous, warmhearted people, and all things Kurdish that had survived the years of oppression. This pair of knitted socks was an example of their delight in color and style. Now, twenty-five years later, my heart misses my dear Kurdish friends. I still love the unique Kurdish items that I brought back from the town of Zakho, where I lived for those six years. The socks I bought for my sister, as well as others I had given as gifts, have been given back to me, some unworn and some with holes. The recipients knew the socks held much meaning for me.

When I was in Iraq, though awed by the beauty and Mideast flair of the socks, I was not a knitter and could not appreciate all that it took to make them. Now a passionate knitter, I marvel even more at these exquisite socks, knowing how much time and skill was involved in their construction. The overall knitting proficiency and intricate knitting techniques that create their design amaze me. I have six pairs of socks, each pair unique. Some are knitted of handspun wool, others of acrylic yarn, and one from cotton. Several have stranded patterns at the toe, and most include complex design elements—lace, cables, traveling-stitch patterns—adding to their beauty. Several pairs share a similar design concept and some of the same patterns. Yet each sock has its individual elements that give it a distinct flair. Because many Kurds cannot read or write, they did not have patterns or knitting books; instead, knowledge was passed on person to person. That knowledge had to be applied and reproduced to create such beautiful works of tradition, function, and art. The women spun the wool from their own sheep on drop spindles, spent hours knitting, and then sold their socks for a pittance at the shops run by their male relatives. 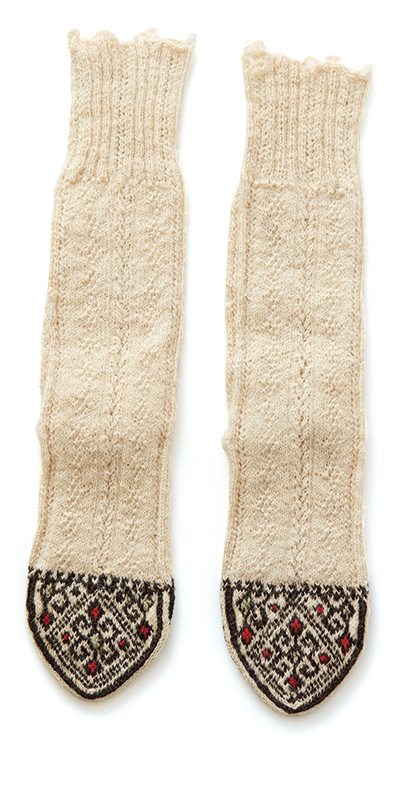 Traditional knitted Kurdish socks from the collection of Barb Sobkoviak.

I wish that I could go back in time and ask to meet the creators of each pair, ply them with questions about their skills, and learn from them. I also wish that I had inquired of my friends who did knit, exploring how the socks were knitted. Thinking about the lives of the unknown knitters has left me searching my memory and pondering my Kurdish friends’ stories.

Kurds love decoration and embellishment, finery, and color. Yet among the hundreds of Kurdish women I knew, only a small number made crafts by hand. Unlike the mystery knitters of the socks sold in the market, most women I met in the 1990s had moved away from the habit and practice of handwork. With such rich traditions, with such a love of beautiful things, and with an immense sense of ethnic pride, why did I not see more Kurdish women engaged in their traditional folk arts?

During the six years Barb Sobkoviak lived in Iraq, she learned to love the Kurds, speak their language, and to develop hundreds of friendships. She also met her husband, Ron, there; they now live in northern Michigan, where she homeschools their six children. When she checked out a few knitting books from the library thinking that the children might learn how to knit, her librarian offered to teach them. From knitting, they started raising Angora goats and long wool sheep, which led to learning to spin, more sheep, and more knitting.