The Polar explorers wore sweaters or jerseys that can be seen in the photographs that were taken on board ship or in the huts.

During the Heroic Age of Polar Exploration, photographers documented daring expeditions to the Arctic and Antarctica. Unintentionally, the photos also recorded the knitwear worn by polar explores. In this excerpt from “Knitwear for Polar Explorers” in PieceWork’s special issue Knitting Traditions Spring 2015, Dr. Angharad Thomas recounts how knitwear served as both a wardrobe staple and protected the men from the harsh climate.

Photography had reached a stage to be useful in recording the expeditions of the Heroic Age. The images by Herbert Ponting (1870–1935) of the Terra Nova Expedition led by Robert Scott (1868–1912) recorded all aspects of life onboard ship and on land, while the Australian Frank Hurley (1885–1962) did the same for Shackleton’s Imperial Trans-Antarctic Expedition of 1914 to 1916. The photographs picture what was being worn, sometimes including recognizably knitted garments. 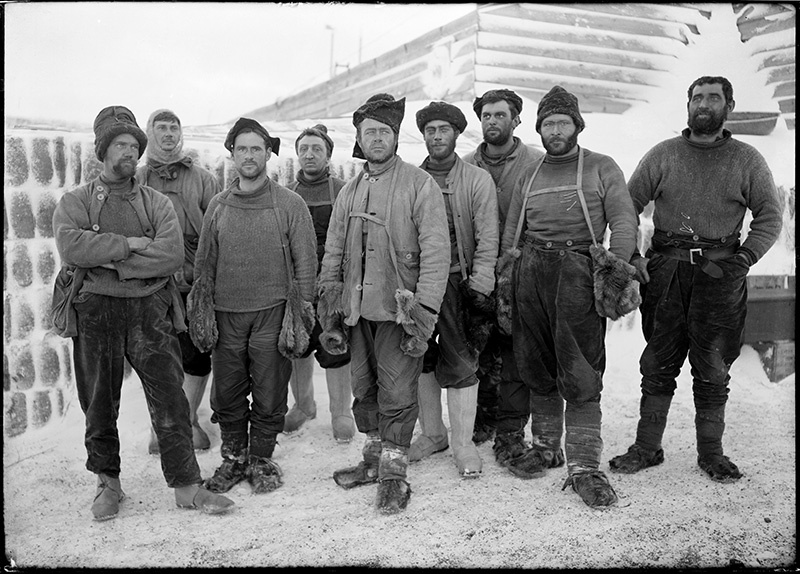 Captain Robert Falcon Scott (1868–1912) and eight other expedition members at camp in the Ross Dependency of Antarctica, during Scott's Terra Nova Expedition to the Antarctic, April 1911. They have just returned from the Southern Party's exploratary expedition. Photo by Herbert Ponting/Scott Polar Research Institute, University of Cambridge/Getty Images.

In a photograph taken by Ponting, members of Shackleton’s expedition of 1910 to 1913 are wearing light-colored long johns and jackets. This image was subsequently supplied to the manufacturers of the items, Wolsey. However, the underwear was a mixture of cotton and wool, and Captain Scott reflected that perhaps it was not as effective as it might have been at keeping the men warm, because sweat froze in the Antarctic temperatures. Captain Scott also considered the two approaches, bringing in European clothing or using that of the indigenous peoples, when he reviewed his expeditions’ use of European clothing, noting in his diary that in fact the indigenous clothing might be better than “our civilised garb.” This problem was made worse for the British expeditions because they man-hauled their supplies on sledges, thus creating a lot of sweat. 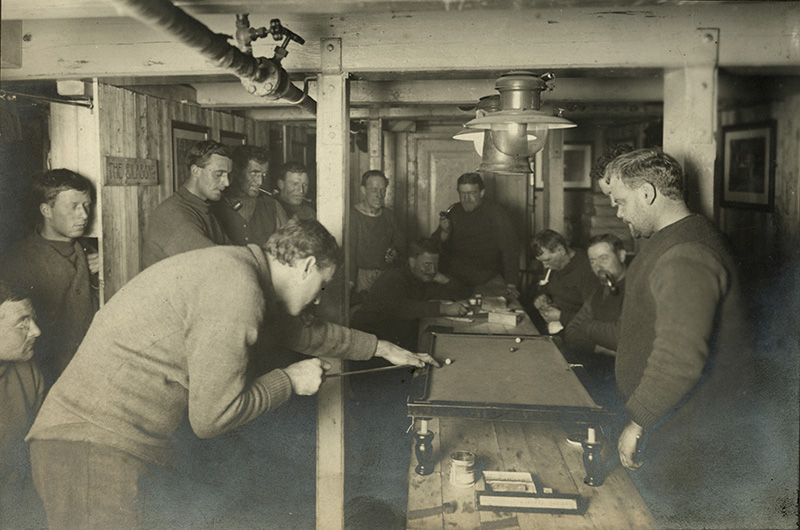 Evening amusements in the 'Ritz', on board the Endurance during the Imperial Trans-Antarctic Expedition, 1914–17, led by Ernest Shackleton. Photo by Frank Hurley/Scott Polar Research Institute, University of Cambridge/Getty Images.

The Polar explorers wore sweaters or jerseys that can be seen in the photographs that were taken on board ship or in the huts. Those taken inside the huts at celebration meals for birthdays or Christmas show many of the men in dark-colored plain sweaters. These would have been Navy standard issue as seen in a photograph taken of the crew of the Terra Nova in 1912, which shows casually posed groups of men wearing their everyday working gear, as different from dress uniform or Polar clothing. Visible knitwear includes a straight-necked, wide-ribbed, light-colored sweater about seven of the men are wearing and a rather smart double-breasted knitted jacket one is wearing. The photograph also shows socks and hats. The light-colored sweaters are most likely the ones Scott refers to in his diary entry of November 29, 1910: “Thanked Glendenning for his handsome gift, 130 grey jerseys. . . .” just before his ship Terra Nova sailed from New Zealand.

Check back in with us on Monday, August 21, 2017, for our new blog series “Trekking the Globe in Stitches,” where we will feature patterns inspired by needlework from the seven continents. First up will be the companion pattern to this story.

Dr. Angharad Thomas is an independent designer, maker, and researcher. She is the volunteer textile archivist for the collection of the Knitting & Crochet Guild of the UK. Angharad has worked as a teacher, knitwear designer, and university lecturer, and traveled to Europe, the United States, Japan, Africa, and Australia. When not knitting or writing, she’s often hiking and trekking in Britain and the Pyrenees, sometimes with her grandchildren.