Knitting As a Livelihood for Afghan Women

Even after the fall of the Taliban, as Afghanistan has remained in turmoil, Afghan women have continued to knit to earn money to support their families.

Mimi Seyferth’s good friend Jeanne Devereaux Best received the slipper socks as a gift from Afghan refugee women in Islamabad, Pakistan; she in turn gave them to Mimi, and they served as Mimi’s inspiration for this project. Photos by George Boe

The Afghan refugee women who gave the original slipper socks to Jeanne Devereaux Best also sold their handknitted socks in Pakistan. Like many Afghan women, Jeanne’s students relied on their knitting skills as a source of income. Although knitters in Afghanistan historically learned their craft from other family members, during the Taliban era (1996–2001), when women were banned from employment in Afghanistan, the Women’s Association of Afghanistan and other women’s groups organized secret knitting, sewing, and handcraft courses to teach women the skills to make clothing and other necessities, which they could sell or exchange. That women had to conduct these classes in secret shows how severely the Taliban restricted women’s rights. (During the Soviet war against Afghanistan [1979–1989], women could meet openly in knitting and sewing circles, though their needlework camouflaged political discussions.) Even after the fall of the Taliban, as Afghanistan has remained in turmoil, Afghan women have continued to knit to earn money to support their families.

The Institute for Economic Empowerment of Women, Peace through Business Program (www.ieew.org) shares the stories of several such Afghan women. Soraya Faizi, a widow, teaches young girls to knit and organized the Afghan Women’s Knitting Association to sell handknitted baby clothing. Sahar and Behesta, two young sisters, knit baby booties to pay for their six siblings’ clothing and school supplies. Aziz, a teenager, knits baby items to contribute to the expenses of her seven-person family. Hajera, an unmarried woman, knits to provide food for her brother and his six children.

Similarly, the Global Giving Foundation (www.globalgiving.org) tells the story of Zia, a mother of seven, who came to the Afghanistan office of Women for Women International (www.womenforwomen.org), an organization that promotes the social and economic empowerment of marginalized women, holding one pair of her handknitted socks. Observing the students’ interest in Zia’s sock knitting, Women for Women International hired Zia as one of its first vocational skills trainers to teach knitting. Zia states that, as a result, “I earn money for my family and share my skills with other women. I am proud to teach others.”

A blogger on the Women for Women International website describes visiting with Afghan women who use the vocational knitting skills they learned at Women for Women International to earn an income by knitting high-quality accessories for international markets. The blogger recounts that these women told her “how the extra income has made a huge difference, not only in what they can afford for their families, but also in their treatment by others in their families.” 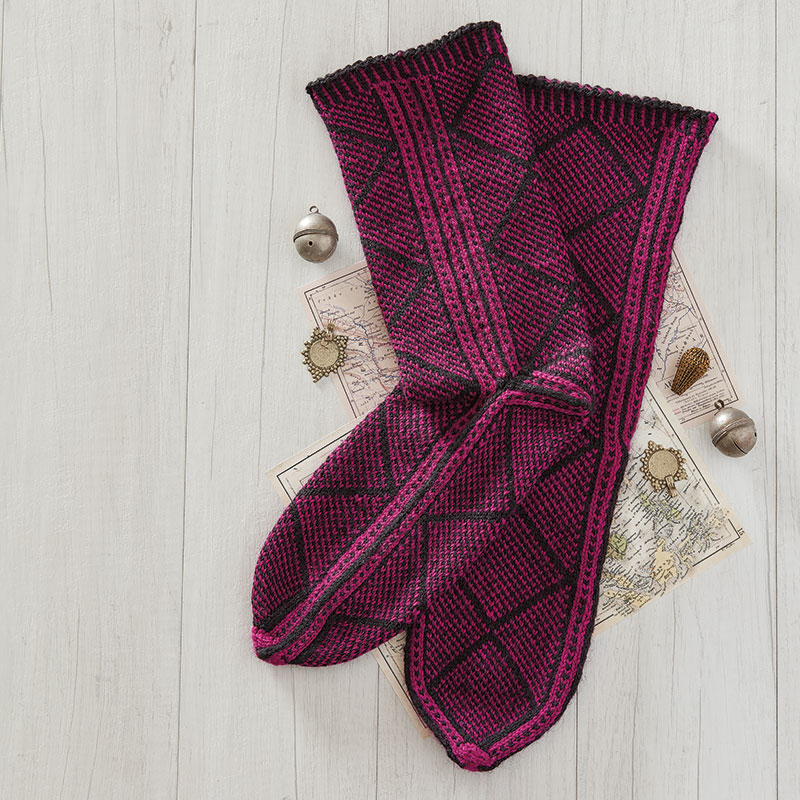 The traditional pattern of the original slipper socks that Mimi Seyferth received as a gift served as the inspiration her “Afghan Refugee Slipper Socks.” Both the original socks and the project socks feature diamond motifs in the long, narrow, rectangular field of the sock body.

Like Women for Women International, the charitable organization Hand in Hand Afghanistan (www.handinhand.org.af) teaches Afghan women to knit. Palwasha Rafiqzada, a university-educated mother of six who works as a vocational trainer for Hand in Hand, herself learned to knit, sew, and raise poultry at an immigration camp in Pakistan in the late 1990s after she had fled Afghanistan to escape the Taliban. Palwasha, who returned to Afghanistan in 2001, has found great fulfillment in her work for Hand in Hand, instructing village women in skills as varied as knitting and poultry rearing: “The women I work with face many problems—poverty, a lack of education, inadequate life skills—but by the time they graduate, I find them strong and enabled.”

In March 2011, the United States Agency for International Development (www.usaid.gov) began to provide training for disadvantaged women in the Kabul Province on weaving and knitting cashmere to make high-quality clothing, with the women selling their woven and handknitted cashmere items to Kate Spade for the 2011 holiday line. Khadeeja, a Kabul housewife with six children, became one of the most talented in the group. “Before the training, I was jobless at home,” said Khadeeja. “My husband was the only person who supported my big family financially, but now I can knit beautiful things.”

These stories about Afghan craftswomen are but a few examples of how knitting and other crafts can transform the lives of people surviving under the direst of circumstances.

Mimi Seyferth, a lawyer who lives outside Washington, D.C., first met Jeanne Devereaux Best at Jeanne’s daughter’s wedding in Greece. Mimi is grateful to Jeanne for giving the original Afghan refugee slipper socks to her and for sharing the story of how she originally came to receive the socks with PieceWork’s readers.

To knit Mimi Seyferth’s Afghan Refugee Slipper Socks, pick up a copy of PieceWork’s January/February 2018 issue, our annual historical knitting issue. This year’s issue is devoted to socks and stockings from around the world.