Knitted Together Through Time

Joseph Sheldon Long fell ill during World War I, and his occupational therapy of choice was knitting.

Unlike most needleworkers, I’m linked to the past through a man. When I first took up the needles a few years ago, my mother told me that my grandfather also had learned how to knit and had even made a shawl.

At twenty-six, Joseph Sheldon Long was older than the average American infantryman who served during World War I (1914–1918). After the war, during which he had received a field commission and a Silver Star for bravery, he married my grandmother, Grace Hight, in 1920. The couple soon had two children, Joseph Jr., born in 1921, and my mother, Kathryn, born in 1922.

When Kathryn was still a toddler, Sheldon fell ill, suffering from a lung infection brought on by being gassed in the trenches in France during the war. He was hospitalized 50 miles (80 km) from the family home in Riverside, California, at Sawtelle Veterans Hospital in Los Angeles. During his recuperation, his occupational therapy of choice was knitting. Back at home, Grace returned to teaching school, and Sheldon’s parents moved in to take care of the children. The story ends happily as Sheldon eventually recovered and rejoined his family. He went on to serve as mayor of Riverside in the late 1920s and early 1930s and as state commander of the American Legion in 1937. 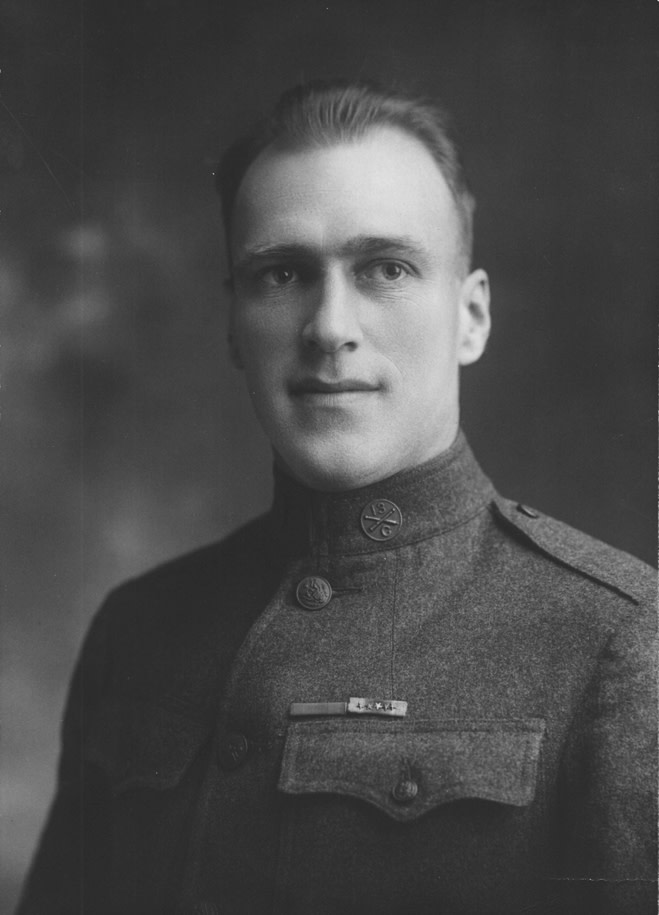 Photograph of Joseph Sheldon Long in his Army uniform. Photographer and location unknown. Circa 1917. Photo courtesy of Jacqueline Blix

I was a teenager in 1966 when my grandfather died, but I remember him as a man of great wit and charm. He seemed to be one of those people who do many things well: after he retired as vice-president of a title insurance company in 1956, he took up woodworking and made a maple desk for me that I still have. I, therefore, was not too surprised when my mom mentioned that he had also taken a turn at knitting. What did surprise me was that Mom still had the shawl he had knitted for her mother, Grace, and that it was far from the gray serviceable triangle I had pictured. Instead, Sheldon had crafted a snappy striped shawl in shades of coral and aqua fitted with a pocket and a clever twisted tassel finish. (He also made a shawl for his sister, Esther Hentschke.) The shawl was part of Mom’s childhood home, at first draped across a chair or other piece of furniture but eventually stored in the cedar chest where my grandmother kept family treasures. Its excellent condition indicates the care with which it was treated over the years.

Recently, Mom passed the shawl on to me. When she pulled it out of the drawer in her nightstand, I knew immediately that it was a treasured keepsake and that it was only fitting that I knit her a replica.

The original shawl is worked in a twisted knit-and-purl rib stitch. As I knitted swatches to duplicate the pattern, I wondered how a novice knitter would have maneuvered his way through the literal twists and turns of the stitches. I learned that some knitters work their stitches twisted as a manner of course in a style called Eastern knitting. Perhaps Sheldon learned to knit using this method, so for him it would have been nothing special, just plain knitting. Because this twisted style is unfamiliar to me, I chose to knit my version in a Mistake Rib pattern that echoes the strong columns of knit stitches in the original.

Its hand, luster, and a burn test suggest that the original shawl is made of rayon. Rayon, a man-made cellulose fiber, was produced commercially in the United States starting about 1911. It was called “artificial silk” until acquiring the moniker of “rayon” in 1924. Many 1920s knitting patterns call for artificial silk yarn. The colors in the shawl reflect the colorful palette that burst forth during that decade as a reaction to the somber khakis and olives that characterized knitting for the soldiers during the war years. Fashions in a 1923 issue of Harper’s Bazaar, for example, sport combinations of green and rose; maize, magenta, and rose; brown, mustard, and mauve; and dark wine combined with enamel-like blue and yellow. Even children’s knitwear is brightly colored: The copy for a little girl’s knitted dress advises, “If she would be truly chic let her wear shrimp-pink.”

I am thrilled to have a memento from my grandfather that he made during a crucial time in his life. Reflecting on the circumstances of its origin, I am struck now by the double link that was forged during his time in the hospital. The first is the close relationship that my mother developed with her own Grandpa Long (Sheldon’s father), which began when her grandparents came to stay while Sheldon convalesced. The second, of course, is my own connection with my Grandfather Sheldon, brought to light with the shawl that he knitted more than eighty years ago. In turn, I like to think that I am forging a link with future generations with the things I knit today.

Jacqueline Blix has been knitting for ten years and quilting for more than twenty. Her interest in history made researching this article a pleasure. Coauthor with her husband, David Heitmiller, of Getting a Life: Strategies for Simple Living Based on the Revolutionary Program for Financial Freedom, “Your Money or Your Life” (New York: Penguin Putnam, 1999), she lives in Seattle, where she has served on the board of the Pacific Northwest Needle Arts Guild and is a member of the Seattle Knitters Guild.

This article was originally published on the web in 2007.