In the United Kingdom during the Victorian era, it’s commonly called a pilch; in the United States, it’s called a diaper soaker. Either term is applicable for the small wool handknitted, or hand-crocheted, cloth diaper cover.

In the United Kingdom during the Victorian era, it’s commonly called a pilch; in the United States, it’s called a diaper soaker. Either term is applicable for the small wool handknitted, or hand-crocheted, cloth diaper cover. This spurred my brief quest into the history of cloth diapers and diaper coverings.

It then follows that whatever humans were wearing as garments at any given time in history the same material would be used to cover baby’s bum. I speculate that in ancient times, animal skins were most likely cut small enough to use as a diaper of sorts, with nature’s own (moss, leaves, or other soft organic material) inside to absorb moisture. As linen-, cotton-, and wool-woven cloth entered the historical timeline, those materials would have been employed to diaper the baby.

By the Victorian era, cotton- cloth diapers were commonly woven in such a way to add loft, or thickness, and therefore improve absorbency. They were folded into rectangles and secured with ties, buttons, or safety pins, which were invented around 1850. Having an additional layer, particularly wool, over the cloth diaper would vastly expand the time between necessary diaper changes. 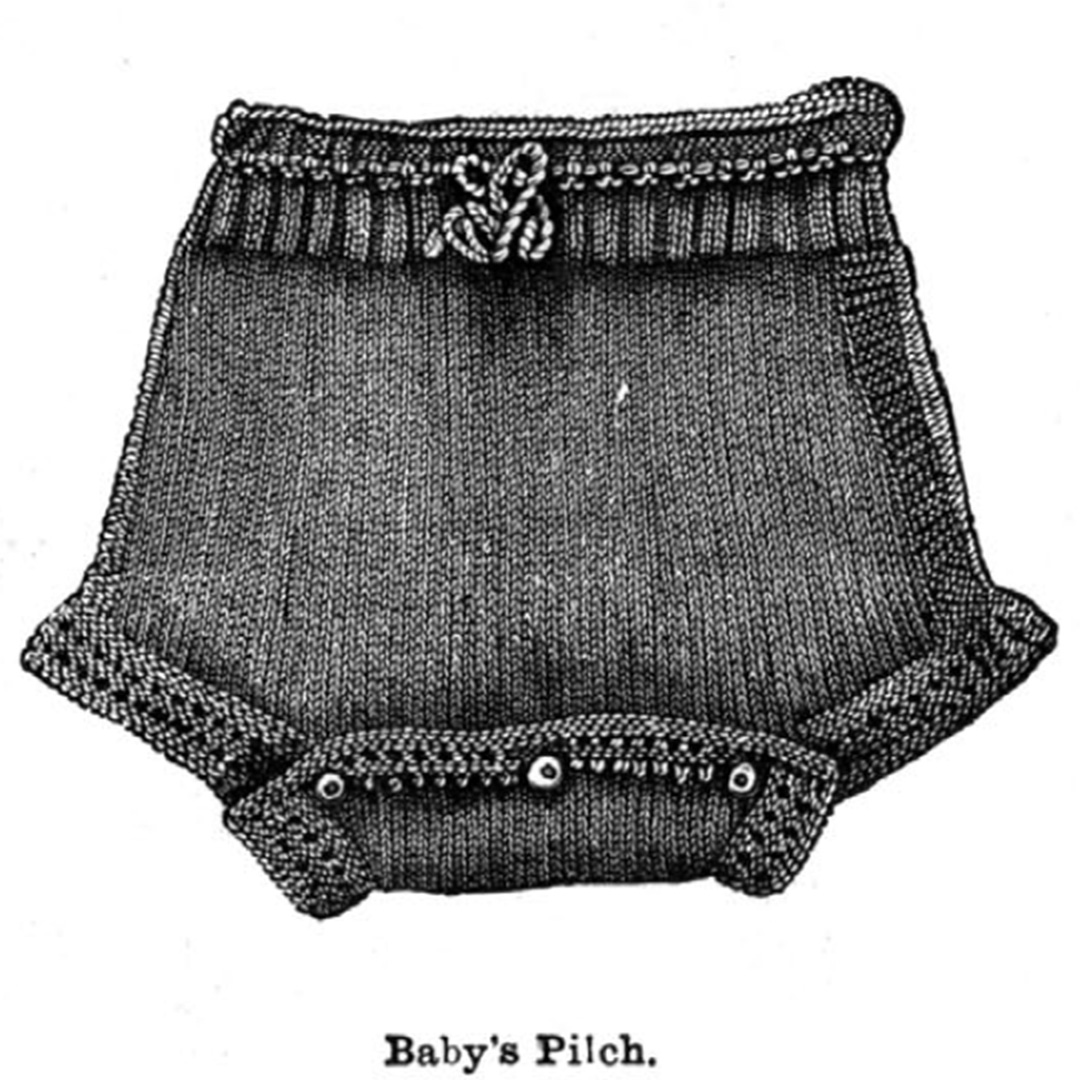 The advantages of wool are many. Wool breathes, so it increases comfort at all times. It helps to regulate body temperature, keeping the wearer warm in the winter with its insulating aspect, and pulling excess heat and moisture from the skin in warmer summer climes, effectively cooling the body. It is naturally hypoallergenic, eliminating or vastly reducing the possibility of skin rashes. Wool is an antimicrobial, inhibiting the growth of bacteria, truly a hygiene helper for baby! Woolen fibers are inherently elastic, so they are less likely to break with repeated abrasion. This means that a wool garment will hold its shape better and far longer than those made with other natural fibers.

Perhaps the key advantage to a woolen diaper cover is the fact that wool is able to absorb over half its weight in moisture before it will feel wet to the touch. In fact, it can absorb well over three-fourths its weight and still maintain its insulating quality, as well as its shape. Imagine the Gansey fishermen hanging over the sides of the boat to net their catch while wearing woolen sweaters, which kept the fisherman warm when wet and retained their shape so as to not hinder their work.

The natural approach to diapering a baby continued until the invention of the rubber or plastic diaper cover in the early 20th century, which all but eliminated the need for a woolen diaper soaker. The advent of disposable diapers soon followed, with experiments and improvements being made from mid-century onward, which offered increasing protection for baby with fewer leaks. However, these nonbiodegradable, plastic diapers are piling up in our landfills, and there is now a resurgence of interest in the use of cloth diapers, as well as the naturally wondrous woolen diaper soaker.

The Weldon’s Practical Needlework pattern for Baby’s Pilch, which is in Volume 3, is knitted with fingering-weight yarn worked at a fine gauge, which was common during the Victorian era. It is knitted flat in rows and in two pieces, with the front and back slightly shaped from waistband to crotch, and seamed at the sides, with leg borders picked up and knit. The back piece extends forward to button in the front. A crochet chain cord weaves in and out of eyelet holes at the waist ribbing for a drawstring to secure the pilch onto baby. 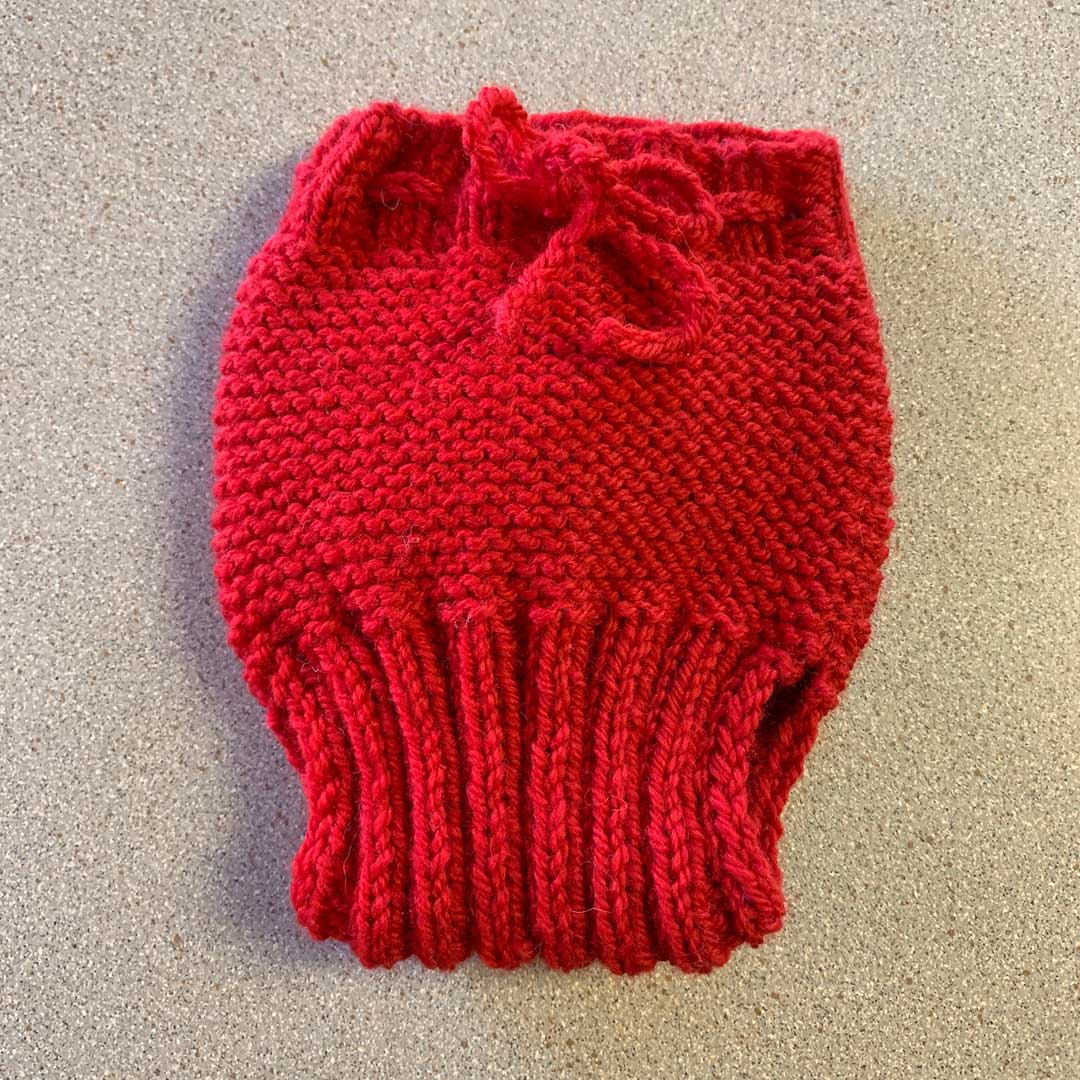 Vicki Square’s diaper soaker based on the Knitted Soakers I No. 4304 pattern from the American Thread Company. Photo by Vicki Square.

As per my usual, I wanted to knit one! I decided, however, that a bit heavier knitted fabric would be beneficial, and with a bit of research, I discovered a knitted diaper soaker pattern from the United States, which used worsted-weight yarn and was published by the American Thread Company in 1946. (The Knitted Soakers I No. 4304 pattern is available here.) The appeal of this design is that the ribbing at the waist and the crotch shapes the soaker by the natural pulling in of the ribbing, while the stitch count remains constant throughout. I used garter stitch for the main body, as it is thicker than stockinette, and worked a few short-rows in the back for additional room for the diaper. I adapted the general style of this design but made it smaller than the pattern indicated; I knit a tiny soaker to fit a newborn. Why are the things we make in small sizes so cute? Undeniably, they appeal to us on an instinctive level. 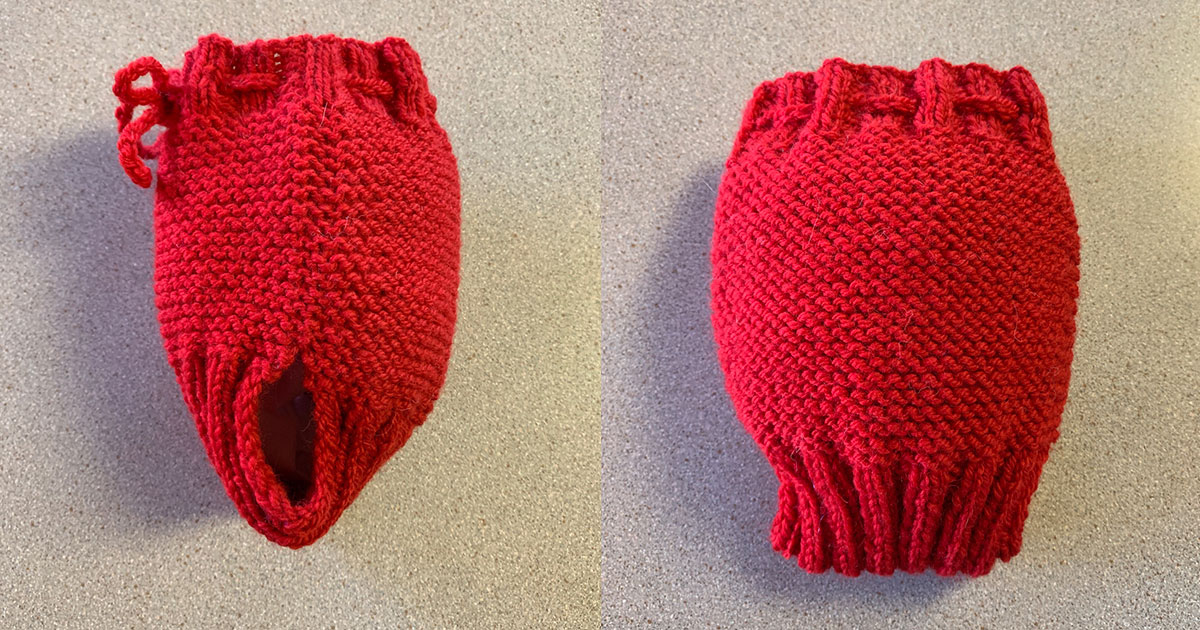 Left to right: The side and back views of Vicki Square’s diaper soaker based on the Knitted Soakers I No. 4304 pattern from the American Thread Company. Photo by Vicki Square.

With the resurgence of interest in the woolen diaper soaker, there are an amazing number of patterns and designs available for your knitting pleasure. Try the Weldon’s pilch for a fine-gauge soaker or some of the free, vintage patterns that use a heavier yarn. There are also many diaper soakers available on Ravelry. They are all so dear; I’m ready to make more! They are small, they are cute, and they are fun, quick knits. What more could a knitter ask for?