Donna Druchunas’s lovely lace socks, featured in the PieceWork, were made for dancing—traditional Spanish-style dancing of the Charras from Salamanca, Spain.

Donna Druchunas’s lovely lace socks, featured in the January/February 2015 issue of PieceWork, were made for dancing—traditional Spanish-style dancing of the Charras from Salamanca, Spain. The dancing socks are worn as part of the Charras richly textured costume, which includes layers of embroidery and lace. Here’s Donna to tell us more.

These socks, inspired by those worn by Charra dancers in Salamanca, Spain, are decorated elaborately with bobbles and lace. Because the socks in some of the photographs I’ve seen look baggy on the leg, I’ve designed mine to mimic that bagginess by using larger needles and an openwork pattern; however, ribbing in the ankle and a tighter gauge on the foot provide a snug fit inside the shoe. 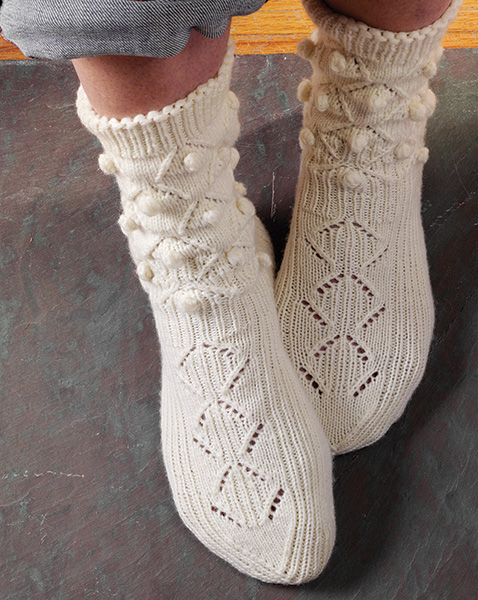 Detail of the bobble and lace pattern on the socks made for dancing. Photo by Joe Coca.

The bobbles are worked only on the leg, but the lace motif is repeated on the center of the foot for added interest. Traditionally, the socks would be worked on five double-pointed needles with the stitches divided evenly onto four needles and the fifth needle used for knitting, but the pattern may also be worked with the magic-loop technique or on two circular needles if you prefer.

Donna Druchunas is a knitwear designer, the author of six knitting books, a contributor to many others, and co-owner with Ava T. Coleman of Stories in Stitches, a company offering historically based knitting publications and workshops. Visit her website at www.sheeptoshawl.com.