Discover how inspiration for French fashion merchants made its way to Paris in the form of three ambassadors dispatched by Tippoo-Saïb.

The year 1788 began as an unusually dull one for French fashion. “Nothing very novel for this winter,” the fashion-conscious Henriette Louise de Waldner de Freundstein, Baroness d’Oberkirch (1754–1803) complained. But inspiration for French fashion merchants was even then making its way to Paris in the form of three ambassadors dispatched by Tippoo-Saïb (1749–1799).

[Tippoo-Saïb,] the sultan of Mysore (today the state of Karnataka) in southwestern India, had directed his representatives, who landed at the port of Toulon on June 9, 1788, to persuade King Louis XVI (1754–1793) to join him in a military alliance against their common enemy, England. The mission ultimately was a diplomatic failure, but it would be remembered as a fashion phenomenon: Although fanciful fashions and textiles à la turque and à la chinoise had been worn in France for decades, it was rare to see actual Asian dress (or Asian people, for that matter) up close.

In their ceaseless quest for novelty, the fashion merchants of eighteenth-century Paris had been raiding the globe. As the Magasin des modes nouvelles commented in January 1787, “No one can deny that our French Ladies have made the Ladies of almost all the other Kingdoms adopt their fashions; however, we must admit that in almost every case they are simply paying them back. Haven’t they borrowed . . . from the Polish, the English, the Turks, the Chinese?” “The Asiatic taste, ” as it was called, had a lasting influence that defied fashion’s fickle tendencies. Fashions à l’orient multiplied until the salons of Paris resembled the harems of Constantinople (or so some French critics claimed). 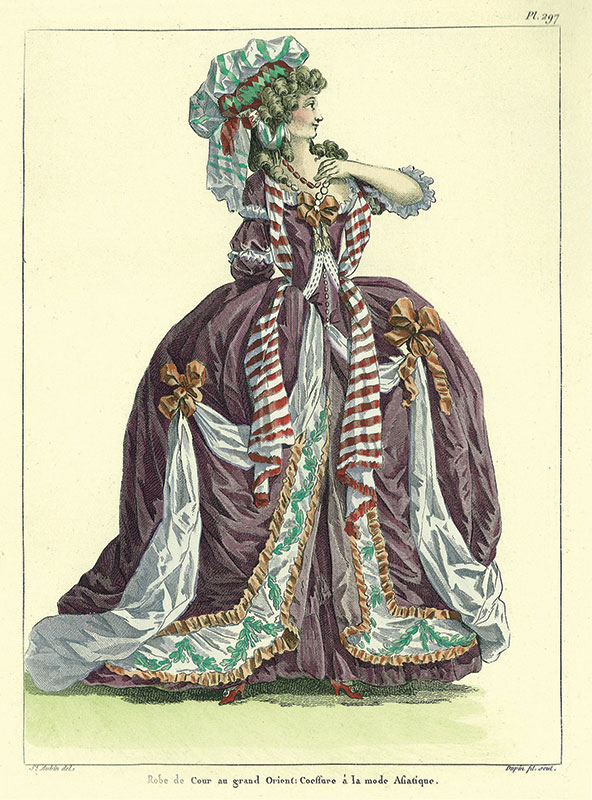 Queen Marie Antoinette (1755–1793) had led the way. At a ball in 1782, according to observer Eliza de Feuillide, the queen had worn “a kind of Turkish dress made of a silver grounded silk intermixed with blue and entirely trimmed and almost covered with jewels. A sash and tassels of diamonds went round her waist, her sleeves were puffed and confined in several places with diamonds, large knots of the same fastened a flowing veil of silver gauze; her hair . . . was adorned with the most beautiful jewels of all kinds intermixed with flowers and a large plume of white feathers.” The event “answered exactly to the description given in the Arabian Nights entertainments of enchanted palaces.”

Fashionable fantasies like these were rarely accurate, literal copies (or imported specimens) of authentic Asian dress. They might have had just one or two identifiably Eastern details—such as a sash, hanging sleeves, or stripes—or simply an exotic name. Distinctions between Near and Far East were vague or nonexistent. A variety of Asian influences might combine in a single garment, but few Frenchwomen could tell the difference. Ignorance in this case was actually a virtue as it freed one’s creativity from the bonds of strict geographical and historical accuracy.

To find out more about the Indian ambasadors’s visit and their influence on French fashion, read the rest of Kimberly Chrisman-Campbell’s fascinating article, "Gifts of the Sultan: The Fashion Influence of Tippoo-Saïb," in the July/August 2009 issue of PieceWork.

Kimberly Chrisman-Campbell is a research scholar in the Costume and Textiles Department of the Los Angeles County Museum of Art. Her work on eighteenth and nineteenth-century French fashion has appeared in Costume, Textile History, and Dress, as well as in several books and exhibition catalogs. She is writing a book on fashion at the court of Louis XVI.