In the November/December 2013 issue of PieceWork, contributor Betsy Butler shares a bit about Mrs. McKinley’s passion for crochet in her article, “First Lady Ida Saxton McKinley and Her Crocheted Slippers.”

It is believed that Ida Saxton McKinley, wife of President William McKinley, made about 4,000 pairs of crocheted slippers. Impressive, indeed! In the November/December 2013 issue ofPieceWork, contributor Betsy Butler shares a bit about Mrs. McKinley’s passion for crochet in her article, “First Lady Ida Saxton McKinley and Her Crocheted Slippers.” Here’s an excerpt:

Ida Saxton Mckinley (1847–1907), the wife of President William McKinley (1843–1901), was limited by precarious health. Suffering from severe headaches, mild epileptic seizures, fainting spells, and periods of depression, she often preferred to remain in her private quarters. But despite her physical limitations, she was an avid crocheter said to have crocheted some 4,000 pairs of bedroom slippers during her lifetime.

According to Kimberly Kenney, curator at the McKinley Presidential Library & Museum in Canton, Ohio, Mrs. McKinley either gave these slippers away to friends, veterans, and orphans, or she sold them at auction to raise money for the charities that she supported. Surviving slippers all have crocheted wool tops and bound cork soles onto which the tops probably were sewn by hand. Most of the slippers are light blue and made from the same pattern. Many have ribbons and elastic drawstrings. It is unknown whether Mrs. McKinley sewed the tops to the soles. 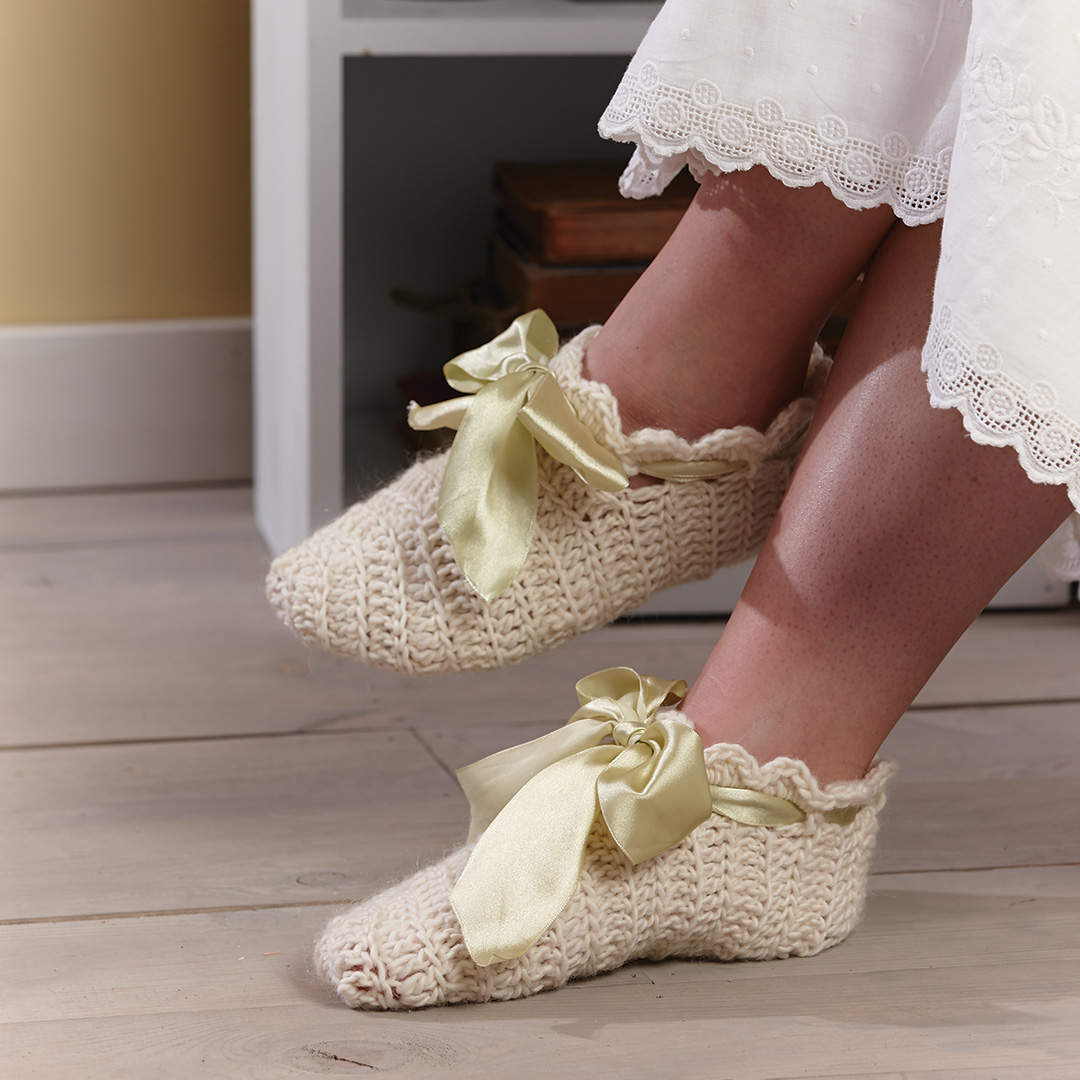 For the November/December 2013 issue of PieceWork, we asked Julie Armstrong Holetz to re-create the pattern for Ida McKinley’s crocheted slippers. Photos by Joe Coca.

“The slippers are a fairly easy crochet pattern, not requiring any special crochet tools, wool, or skills,” said Karen Ballard, a textile artist and a professional member of the Crochet Guild of America. “Once the pattern was mastered, I imagine it could be done from memory, without following a pattern and could be whipped up by a skillful crocheter in a night or two.”

Betsy Butler is a librarian, whose fondness for history, reading, and travel equals her enjoyment of cross-stitch, needlepoint, and knitting. She wrote “Trimmed and Ornamented: First Lady Ida McKinley’s Dresses and Gowns” for the July/August 2013 issue of PieceWork and “‘If I Only Could See to Sew’: How Needlework Enhanced the Quiet, Industrious Life of Henrietta McGuffey Hepburn” for the November/December 2009 issue. Visit her blog at http://beesfirstappearance.wordpress.com.

Download your copy of the the November/December 2013 issue of PieceWork to read the rest of Betsy’s article and crochet your own pair of slippers just like the ones made by Mrs. McKinley.