Around the turn of the twentieth century, a new style of art emerged in Scotland’s largest and most bustling city, Glasgow. Learn about the artists who helped establish this movement, Charles Rennie Mackintosh and his wife Margaret Macdonald.

Around the turn of the twentieth century, a new style of art emerged in Scotland’s largest and most bustling city, Glasgow. This artistic movement encompassed all aspects of architecture, interior design, and the decorative arts, including paintings, posters, furniture, and stained glass. The artists who helped establish this movement, Charles Rennie Mackintosh (1868–1928) and his wife Margaret Macdonald (1864–1933), collaborated on public buildings, residential homes, and commercial establishments, most notably the Glasgow School of Art and Miss Cranston’s Tea Rooms. Not quite Arts and Crafts, not quite Art Nouveau, clearly influenced by contemporaries in Vienna and Brussels—ultimately, their work is uniquely Mackintosh.

Charles Rennie Mackintosh was born in Glasgow on June 7, 1868. His father, a policeman, was an avid gardener and encouraged his son’s botanical drawings. Charles continued working on botanical drawings and paintings throughout his life and incorporated them into many of his designs. In a 1902 lecture he stated, “Art is the flower—Life is the green leaf. Let every artist struggle to make his flower a beautiful living thing—something that will convince the world that there may be—there are—things more precious—more beautiful—more lasting than life.” 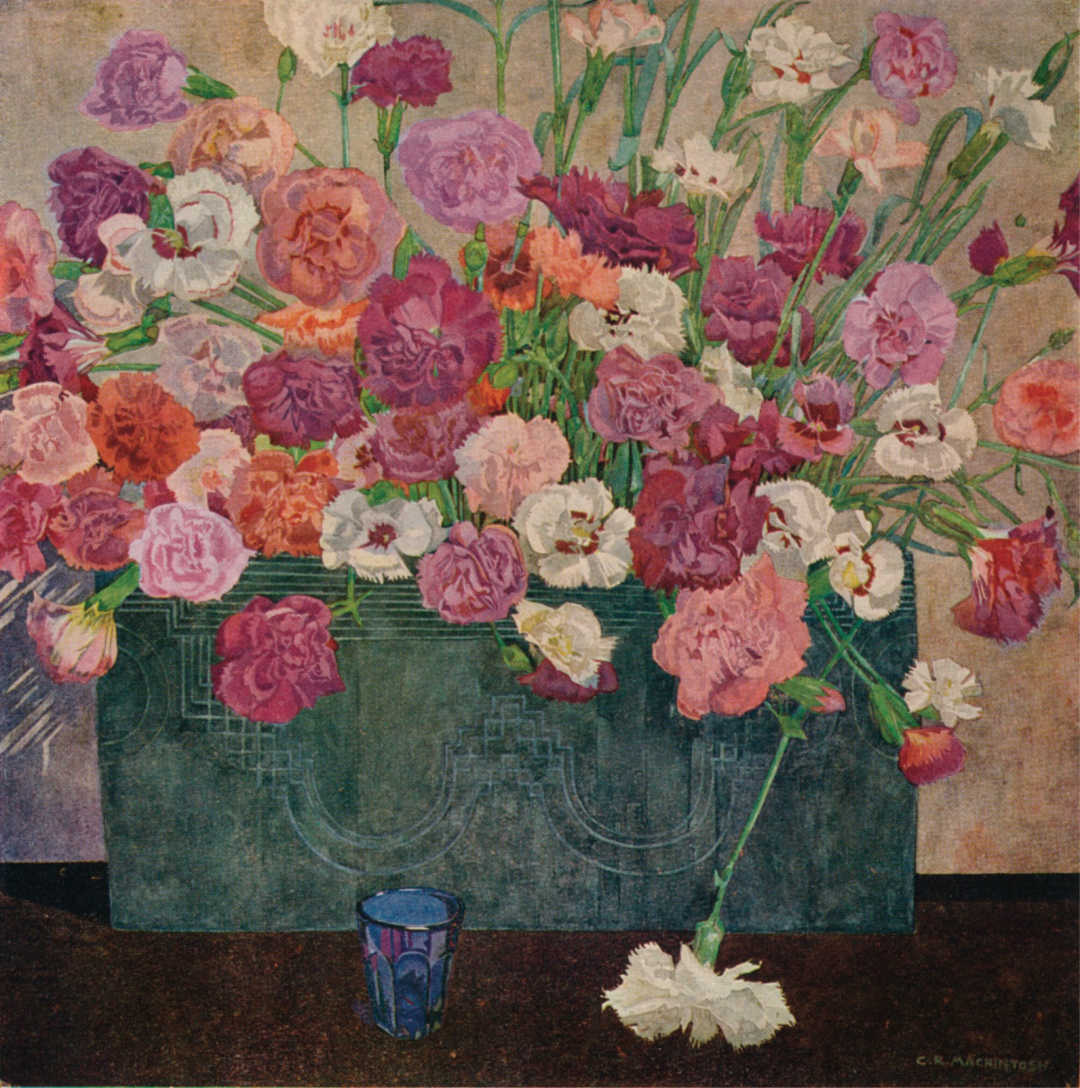 _Pinks_ by Charles Mackintosh, painted around 1902. Encouraged by his garden-loving father, Charles drew flowers and plants all his life. | Photo by The Print Collector/Getty Images

By the age of 16, Charles began training as an apprentice to architect John Hutchinson. He also took classes at the Glasgow School of Art while still a teenager. When Francis Newbery became the school’s director in 1885, he encouraged a learning environment that fostered individual talent. Newbery became an early and lifelong supporter of the young artist; Charles would go on to be synonymous with the school as an alumnus and as the master architect whose designs for the school are today considered the most important work of his career.

Charles joined the architectural firm of Honeyman and Keppie in 1889, working closely with the younger partner, John Keppie. That same year, Charles won the Queen’s Prize for his design for a Presbyterian church. It took nearly 10 years for Queen’s Cross Church to be completed, and it was the only one of his church designs actually built. The building currently houses the Charles Rennie Mackintosh Society. 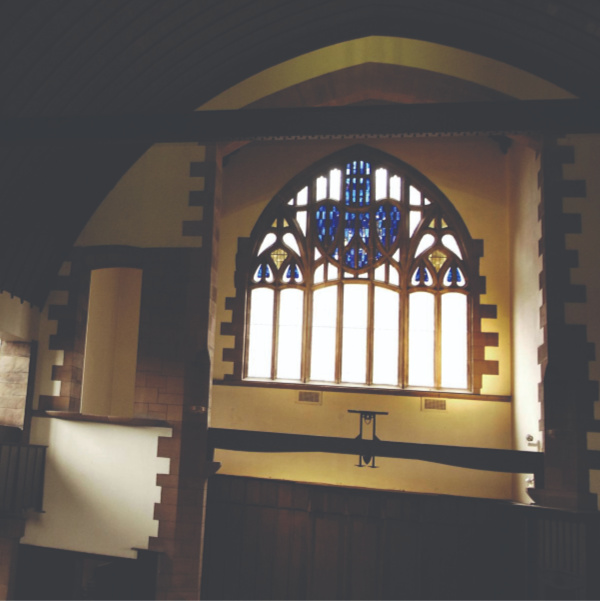 In 1890, one of Charles’s designs earned him a prestigious travel scholarship, and he used the funds to visit Italy in the following year. On this first trip outside of Scotland, he traveled widely, sketching and painting buildings. Yet his Italian interlude seemed to have little influence on his design style. One of his firm’s partners, John Honeyman, was an expert in medieval Scottish buildings and their restoration, and it may be Honeyman’s influence that led to Charles’s strong belief that modern Scottish architecture should be rooted in Scotland’s past.

Charles stayed true to Scottish traditions in his designs for public buildings. He and Keppie worked together on the Glasgow Art Club in 1893, and although the project was directed by Keppie, distinctive design features (including fireplaces, fretworks, and door fittings) are recognized as Charles’s work. That same year, Charles was also involved with additions to the Glasgow Herald Building, which can still be seen on Mitchell Street. The red sandstone exterior reflects Charles’s commitment to traditional Scottish architecture.

In 1896, Honeyman and Keppie entered a competition to design a new Glasgow School of Art. Their firm was awarded the commission, and nearly every aspect of the finished design, from the exterior to the interior furnishings, was Charles’s creation. 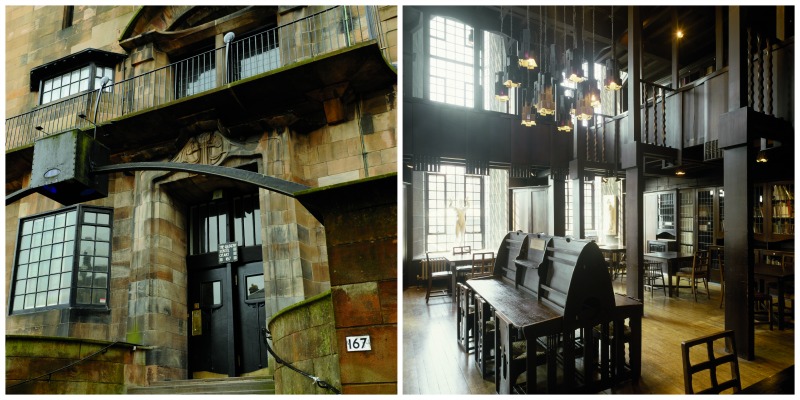 The school was built in two phases, with the eastern wing opening in 1899. It included the school’s museum, featuring a glass roof and exposed timber truss work that shows the influence of the Arts and Crafts movement. The leaded glass windows on the door of Studio 45 featured the stylized “Mackintosh rose” motif that Charles is so well known for today. (Fires in May 2014 and June 2018 severely damaged the building; in mid-September the university’s board announced that the building will be fully restored.

During the 1890s, Charles became good friends with his coworker Herbert McNair, and together they became associated with a group of female art students who called themselves “The Immortals.” The group included the Macdonald sisters, Margaret and Frances. Charles, Herbert, and the Macdonald sisters paired off and became known as “the Four.” The Four collaborated on a number of projects until Herbert and Frances moved to Liverpool just before they married in 1899; Charles and Margaret married in 1900. 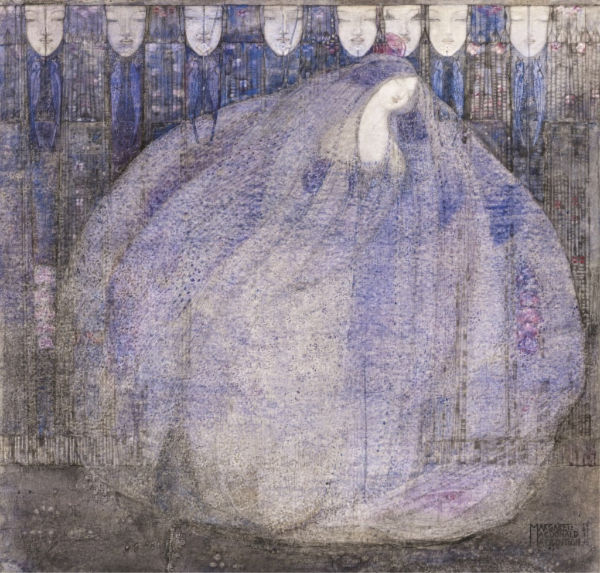 Margaret Macdonald Mackintosh, _The Mysterious Garden,_ 1911. Purchased with help from The Art Fund, 2011. | Photo by National Galleries of Scotland/Getty Images

Charles’s relationship with Margaret had a marked influence on his career, and he realized it—he supposedly said of her, “Margaret has genius; I only have talent.” Born in 1864, Margaret lived in England until her family moved to Glasgow in 1890. Margaret and her younger sister Frances took classes at the Glasgow School of Art and began their professional careers with the Macdonald Sisters Studio at 128 Hope Street. Margaret became a versatile artist, working in watercolor, metalwork, painting, and textiles. After her marriage, Margaret signed few of her works; her influence on and contributions to her husband’s work can only be imagined.

While Charles was working on his designs for the Glasgow School of Art, he began collaborating with Catherine (Kate) Cranston, a businesswoman and temperance proponent who built a succession of tea rooms across the city. Tea rooms were an important part of turn-of-the-century Glasgow culture, typically offering lunch and tea menus. Respectable men and women patronized them because such businesses observed the proprieties with separate areas: men’s areas often had billiard and smoking rooms, ladies’ rooms were limited to dining. For men, they were places to conduct business; for women, they were a suitable public place to meet friends or take a break from shopping. 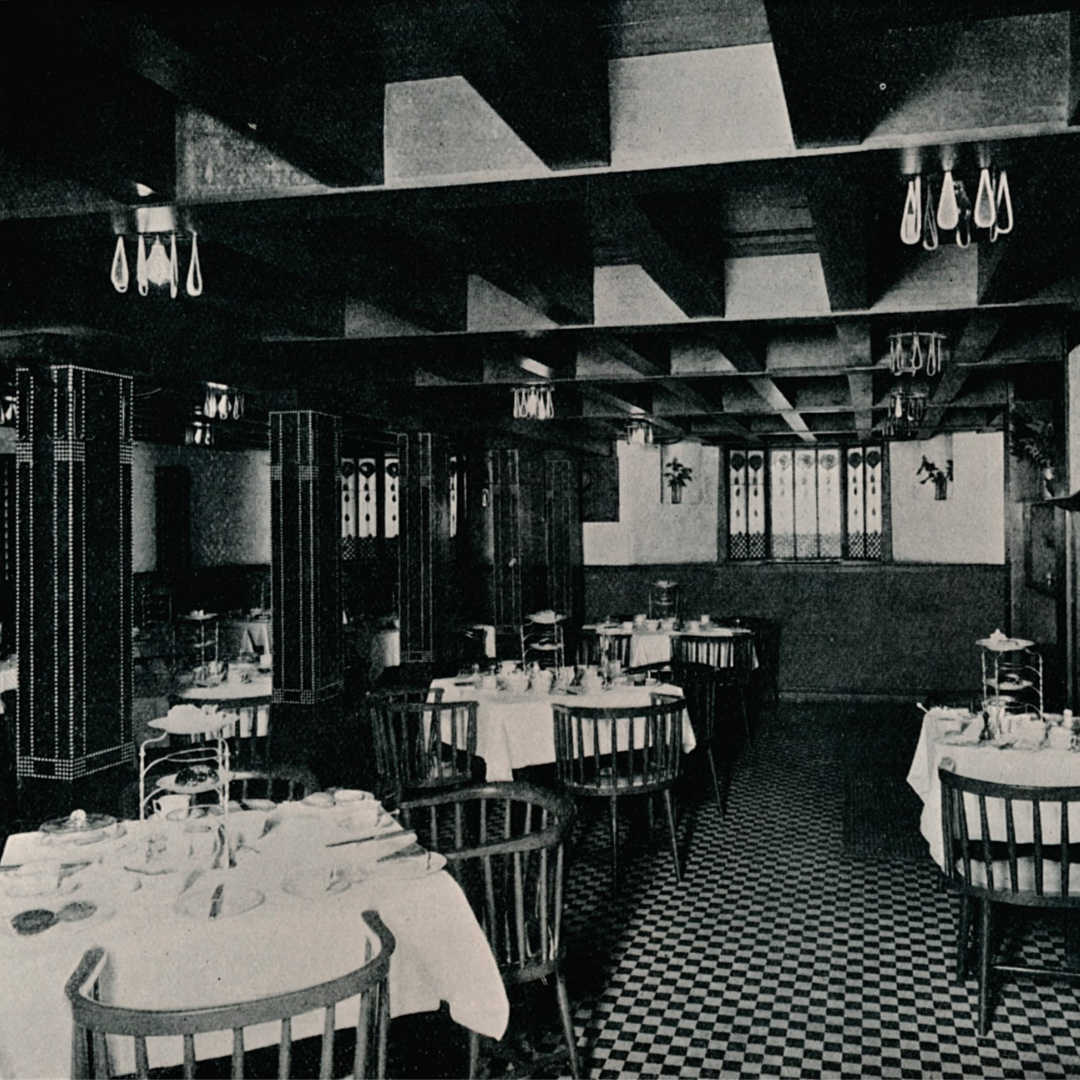 The Mackintosh-designed interior of Miss Cranston’s Tea House on Argyll Street, around 1906. Photo by The Print Collector/Getty Images

Kate first commissioned Charles to create stenciling for the walls of her Argyle Street Tea Room. He (and later Margaret) would work on projects at her tea rooms on Argyle Street, Ingram Street, and their ultimate collaboration, the Willow Tea Rooms on Sauchiehall Street. Charles and Margaret also worked on Kate’s private home, Hous’hill. Kate became their most devoted patron, and as she built new tearooms and expanded her existing spaces, she provided them work through 1917.

To learn more about Charles and Margaret’s work—and about other art and fashion pioneers—get a copy of Knitting Traditions 2018!

Bonnie-Lynn Nadzeika lives in northern New Jersey and enjoys writing, knitting, needlework, and combining them all with her love of history.