Embroidery and the Masonic Apron

Although the Masonic brotherhood developed its own rituals and rules, it retained in its symbolism the trappings of the stonemason’s craft, including the apron.

Details of the Masonic apron from Colorado State University showing an inscription. Photos by Joe Coca

According to Masonic lore, the Marquis de Lafayette (1757–1834), who had fought under General George Washington (1732–1799) in the American Revolution, presented America’s future first president with a white silk Masonic apron embroidered by Madame de Lafayette. (A number of textile experts firmly believe that the apron is Chinese in origin.) The apron, now in the collection of the Masonic Library and Museum of Pennsylvania in Philadelphia, is an exquisite example of the most significant article of Masonic regalia and showcases the symbolism so important to the fraternal organization.

The Masons, or more formally the Free and Accepted Masons or Ancient Free and Accepted Masons, had their origin in late-seventeenth-century England, when guilds for working (“operative”) stonemasons were opened to “philosophic” or “speculative” masons, men who did not work with stone but were interested in the guilds’ ancient rules, rites, and adherence to the principles of geometry. Many of the latter group were members of the nobility or the merchant class, who brought with them the ideals of the Enlightenment with its emphasis on rationality and self-improvement. By 1717, speculative members outnumbered operative ones, and the organization changed its focus to the philosophical and moral development of its members. These ideals rapidly attracted additional members all over Europe, and by the 1730s, the Masons also were established in America. In addition to Lafayette and Washington, Paul Revere, Benjamin Franklin, and John Paul Jones were Masons. 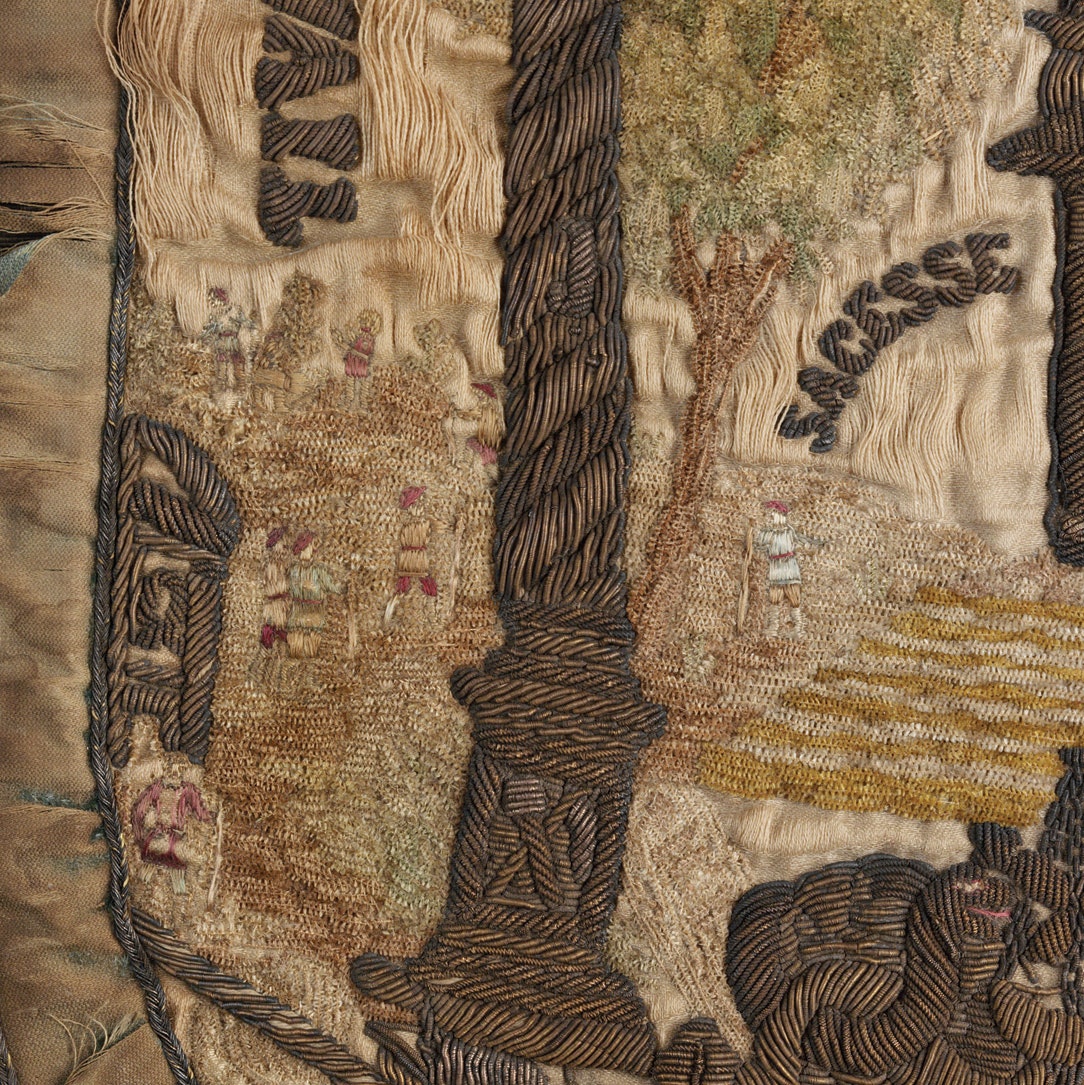 Although the Masonic brotherhood developed its own rituals and rules, it retained in its symbolism the trappings of the stonemason’s craft, including the apron. At his investiture, every new Mason is presented with an apron. As it encircles his waist, he is charged with the knowledge that he is within the bounds of the brotherhood.

Originally, the apron was plain, made of white leather or lambskin. Its whiteness symbolized purity and innocence and served as a reminder that purity of heart and uprightness of conduct were qualities expected by the order. In time, however, the plain white apron gave way to ones embellished with Masonic symbols. Washington’s apron depicts more than thirty. Among them are the level (a reminder that we travel on the level of time), the plumb (an admonishment to walk uprightly before God and man), the trowel (to symbolize spreading the cement of brotherly love), the Bible (which is the great light of Freemasonry), and the All-Seeing Eye (a symbol of watchfulness and of the Supreme Being, and readily recognizable from its presence on the U.S. dollar bill). 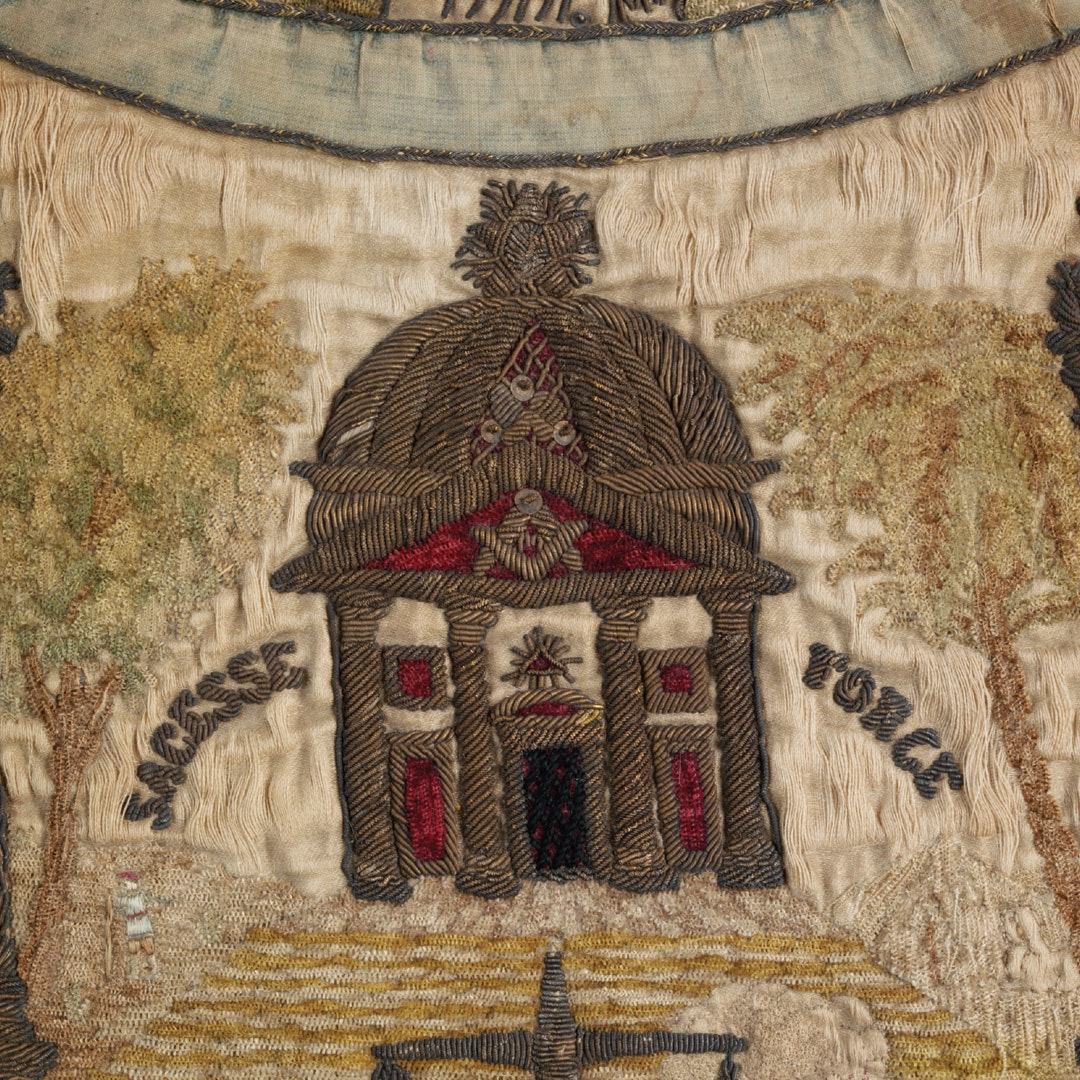 Unfortunately for historians, makers of aprons did not sign their work. Newspapers of the period advertised professional embroiderers specializing in military and Masonic regalia; sign painters offered painted aprons, and stationers supplied engraved ones. Undoubtedly, family members made some aprons as gifts. At a time when fancy handwork, particularly embroidery, was an educated girl’s highest accomplishment, a Masonic apron would have required the utmost skill as well as only the best materials. Once a father or husband received the gift of an apron, however, it passed from his household into the world of the Masonic lodge. The lodge might keep records of who had owned the apron but not of who made it.

Today, about 1.5 million Masons live in the United States. Aprons may be seen in lodge museums and historical societies. Collectors of Americana avidly seek them out: In a recent eBay auction, a Masonic apron owned by Buffalo Bill Cody (1846–1917) sold for $2,750.

Looking for more embroidery work? Many projects along with this article can be found in the PieceWork March/April 2005 issue.

Also, remember that if you are an active subscriber to PieceWork magazine, you have unlimited access to previous issues, including March/April 2005. See our help center for the step-by-step process on how to access them.

Deborah Dwyer, an attorney in New York City, is also a fellow at the Folk Art Institute of the American Folk Art Museum.