Game of Kings: The Embroidered Caupar Game Board

The ancient game of Caupar is mentioned in several historical records, and several old paintings and embroidery pieces show kings and subjects playing it with gusto. It is still played with gusto across India.

Detail of one of the arms of the embroidered Caupar game. Photos by Chitra Balasubramaniam

The piece pictured above is a section of a hand-embroidered Caupar (Chopad, Chausar, or Chaupar) game. Caupar is an addictive cross-and-circle board game that was played by kings and royalty and a game in which kingdoms have been lost.

In the ancient Indian Sanskrit epic Mahabharata, this infamous game of dice resulted in King Yudhistra losing everything after staking his wealth, kingdom, brothers, and in the end, his wife. His wicked uncle had manipulated the game. The entire epic hinges on this game of Caupar, which then became the basis for the Kurukshetra War or Mahabharata War. 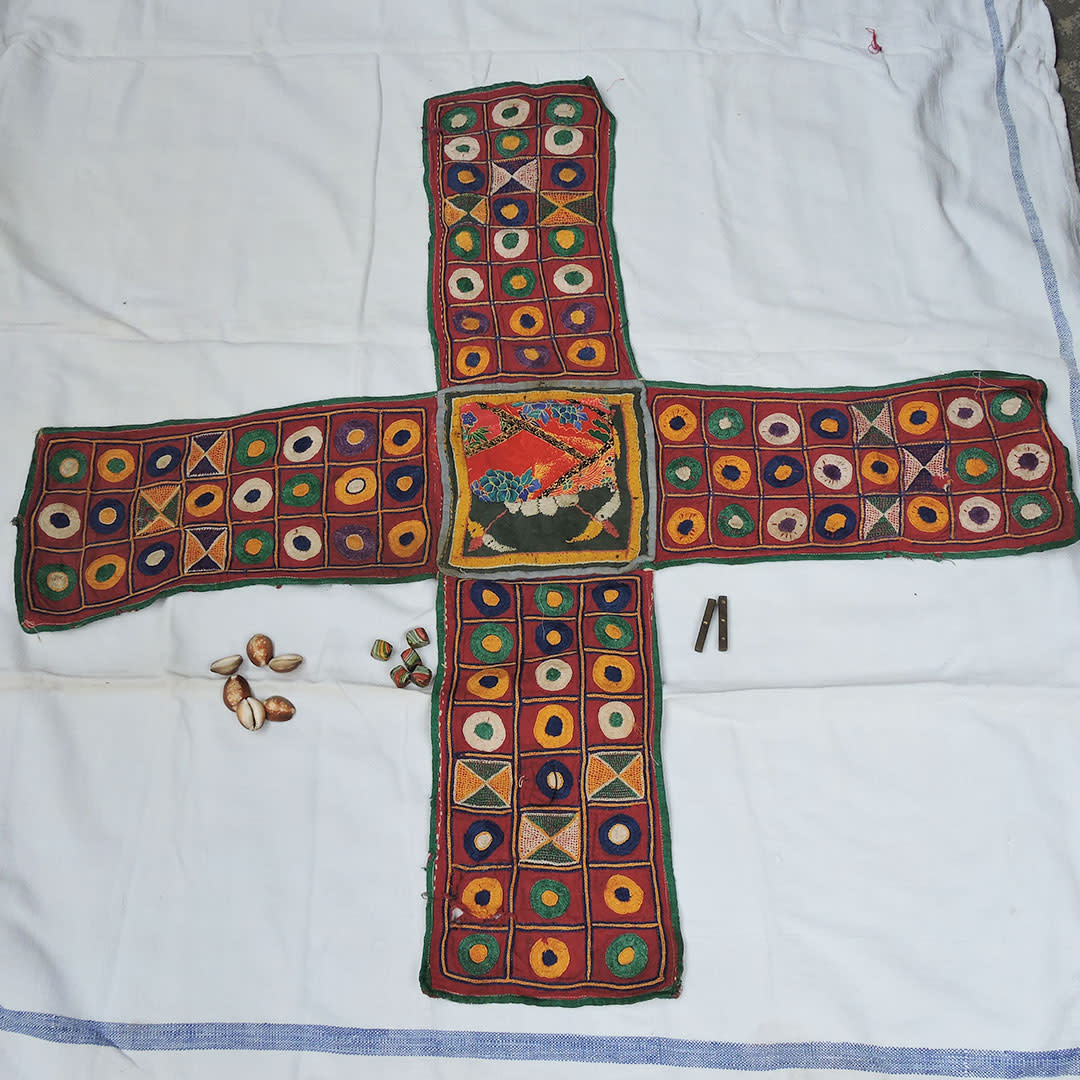 The game spread out. The centerpiece, with the new portion of cloth, can be seen together with the older embroidery in the background. On the sides are the cowrie shells, which are used as dice, dice sticks, and blocks.

Caupar is a very ancient game and is mentioned in several historical records. Several old paintings and embroidery pieces show kings and subjects playing it with gusto, and the game is still played with gusto across India. Given the destructive connotations in the epic and the gusto with which it is played, Caupar is usually never played at home but outside in the streets or in a common area. Wooden blocks, or pieces, are used as coins to move along the squares. The dice can be stick dice or cowrie shells. Caupar is a manipulative game that requires brain work and time to master. Culturally, it is still the norm to play the game during Shivratri Festival, a Hindu festival honoring the god Shiva, when devotees do not sleep the entire night.

This particular piece is from a vintage textile shop. It was my Facebook friend, Salim Wazir of Museum Quality Textiles based in the Kutch district of Gujarat in western India, who identified the embroidery as that of the Sodha Rajputs clan. Salim is a fountain of knowledge about Kutch communities, their embroidered textiles, and their cultural practices. 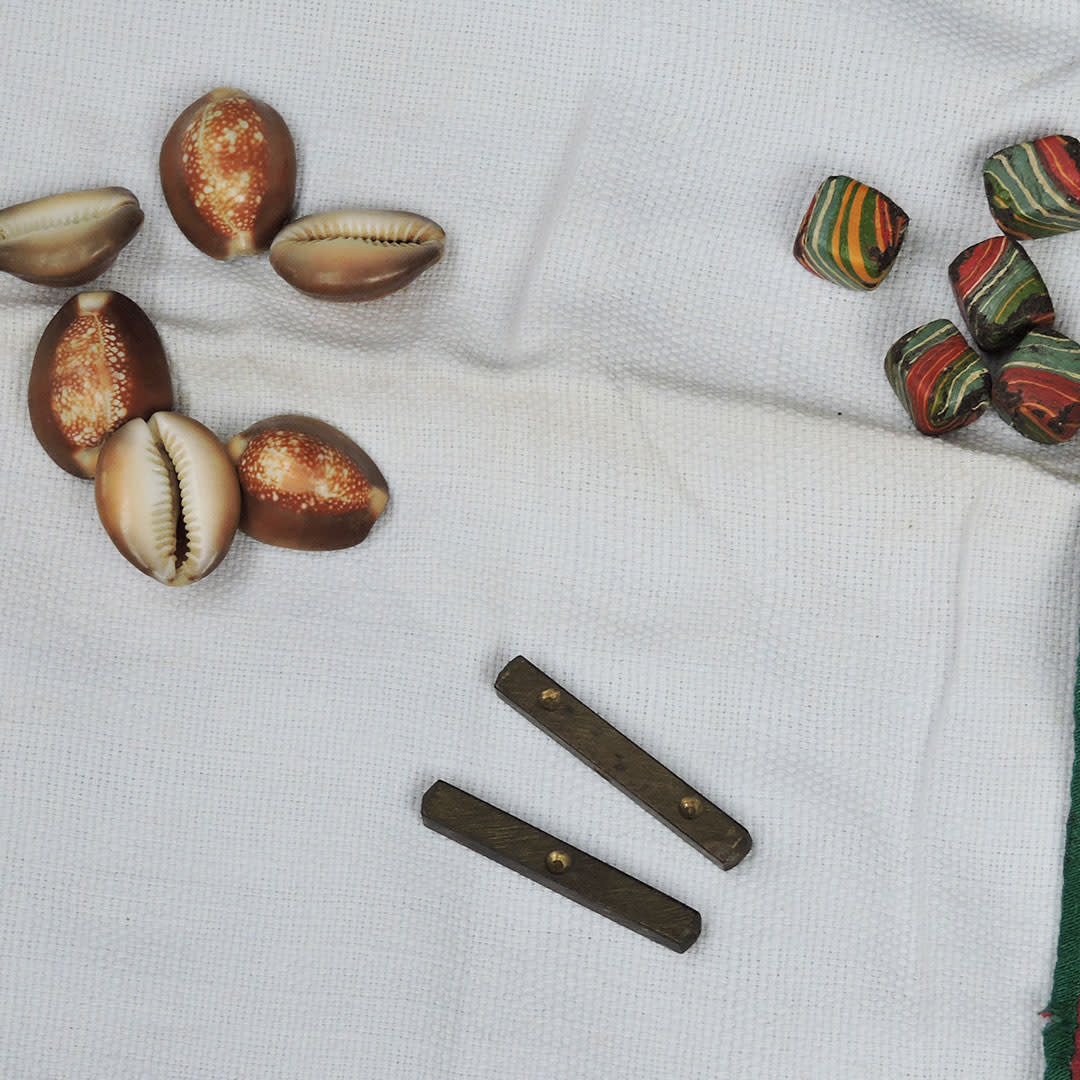 A close up of the cowrie shells, blocks, and brass dice sticks. These are props used with the old piece. The brass dice stick was handmade in a village in Tamil Nadu. Chitra’s mother commissioned the piece so that Chitra would have a dice stick to play with and know what a dice stick was used for. Commissioning it also helped the craftsman continue with his profession.

The embroidery of the Sodha Rajput is called pakko, or pakko bharat, and bharat means embroidery in Gujarati. Pakko includes a vast repertoire of stitches, numbering around 38, and includes soof and neran embroidery stitches. Usually, the floral motif in pakko is the most outstanding feature. This piece, however, contains a mix of stitches. The stitches used to encase the mirror in sheesha embroidery have been used without the mirror, and the center is filled with stitches. Since this is a game board, using a mirror would make playing difficult. The base of the caupar is made using red fabric, which is the preferred color of the Sodha Rajput community.

This piece is called a salvaged textile find, since a portion of the center of the piece had been nibbled away by mice and then repaired. To repair the damage, pieces often have a piece of good cloth stitched on the original and are then carefully reconstructed with a restorer reworking the embroidery stitches. Another alternative would be to have a similar embroidery made and patch up the center. Also, some dealers, in such cases, will simply cut up the textile and start selling each piece as a standalone to tourists.

Despite this piece’s repair, I picked it up because the four arms are brilliant and almost painstakingly embroidered. What stands out for me is the brilliance of the embroidery and the color combinations in the work.