Virginia Woods Bellamy described Number Knitting as “merely a method of knitting design, based on squares and triangles and their tributary units.” She discarded traditional measurements for geometrical principles.

Number Knitting, the innovative knitting method developed by Virginia Woods Bellamy (1890–1976), emerged from the fog of history with the discovery of original knitted garments and her book Number Knitting: The New All-Ways Stretch Method at her son’s 2004 estate sale in Moorhead, Minnesota. Virginia’s work was beautifully arrayed during the sale’s evening preview, so dress historian and curator Ann W. Braaten lined up on opening day intent on purchasing the book and examples of the knitting to learn about Virginia’s oeuvre. She shared her book and three knitted pieces with Susan Strawn, knitting researcher and author, when they met for a symposium in 2011. 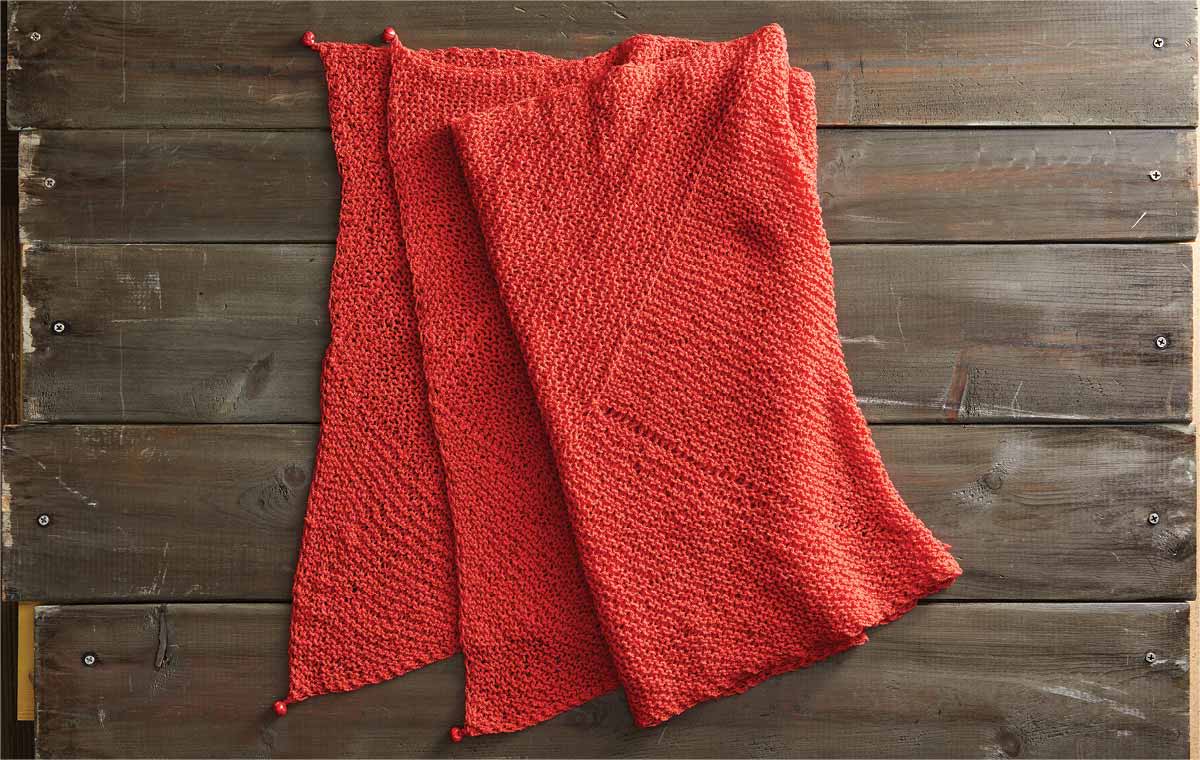 Susan’s first thought was, “Why have I never heard of this woman and Number Knitting?” She recognized a research opportunity and a potential collaboration to create a written record of Bellamy’s work and interpret Number Knitting for contemporary knitters. Ann agreed to research Virginia’s life story, and Susan began to decipher Number Knitting. Their research led to several published articles and patterns (see Further Resources).

A few years after the estate sale, Ann learned from the sale’s manager that additional Number Knitted pieces were sold within the Fargo-Moorhead fiber arts community. Ann began asking each fiber artist she encountered if they had bought any of Virginia’s knitting. Vicky Jo Bogart—artist, educator, collector, and curator—responded. She attended the sale when only a jumbled heap of knitting remained. Intrigued, she sifted through them, considering color and design, size and structure, intending to use them as wearable art and visuals for displays and classes. Garments from Bogart’s collection, never before published, are featured here. All the garments were knitted of wool either by Virginia or her students, who were given name credit for work published in Number Knitting.

Virginia Woods Bellamy described Number Knitting as “merely a method of knitting design, based on squares and triangles and their tributary units.” She discarded traditional measurements for geometrical principles. She began each design by selecting among seven knitted geometric units, then drew the design on graph paper unit by unit, and numbered each unit in the order in which it would be knitted. She devised notations and abbreviations to clarify instructions.

Following the graph as pattern, she knitted loosely in garter stitch on large needles, picking up stitches along edges unit by unit. Loosely knitted pieces required less yarn and knitting time. Her method created light, warm garments with few or no seams, bias stretch, minimal yarn wastage, and exceptional resilience. She preferred wool but experimented with other natural fibers and metallic yarns for special- occasion pieces. 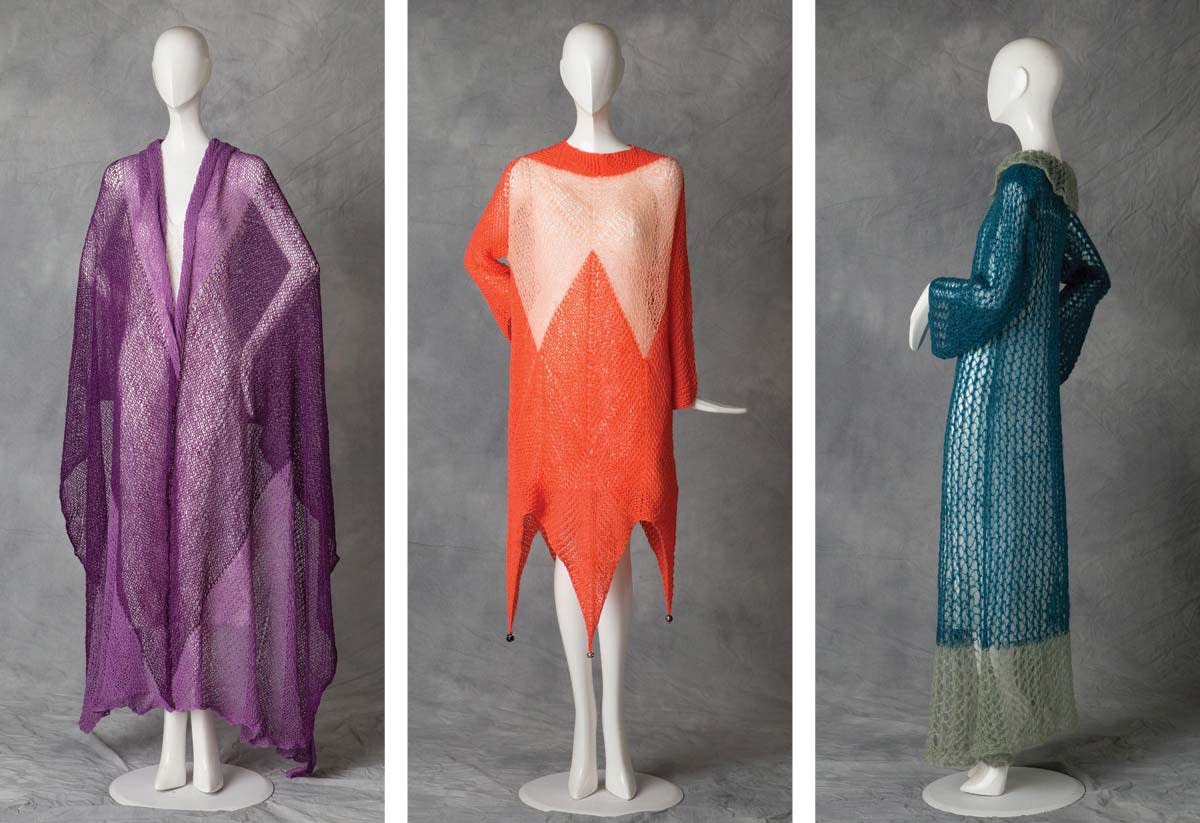 Virginia recommended knitting swatches with a range of sizes of knitting needles and different yarns to assess drape and softness; a knitter could select a preferred drape and fabric instead of knitting to the fixed gauge directed in a pattern. Interest in Number Knitting led to workshops, exhibitions, an international correspondence course, a patent for the technique (1948), designs featured in women’s magazines, and her book published in 1952.

Virginia kept close to geometrical principles for the fitted design of the Hampton blouses and cardigan. Divided squares and angles of ribbing were planned and worked to create contrary tension and shape the garments to lines of the figures. Slightly heavier yarn and change in needle size further tailored the shapes. Back and front were knitted separately and joined at the sides. A divided square at each armhole formed a gusset that also joins back to front. 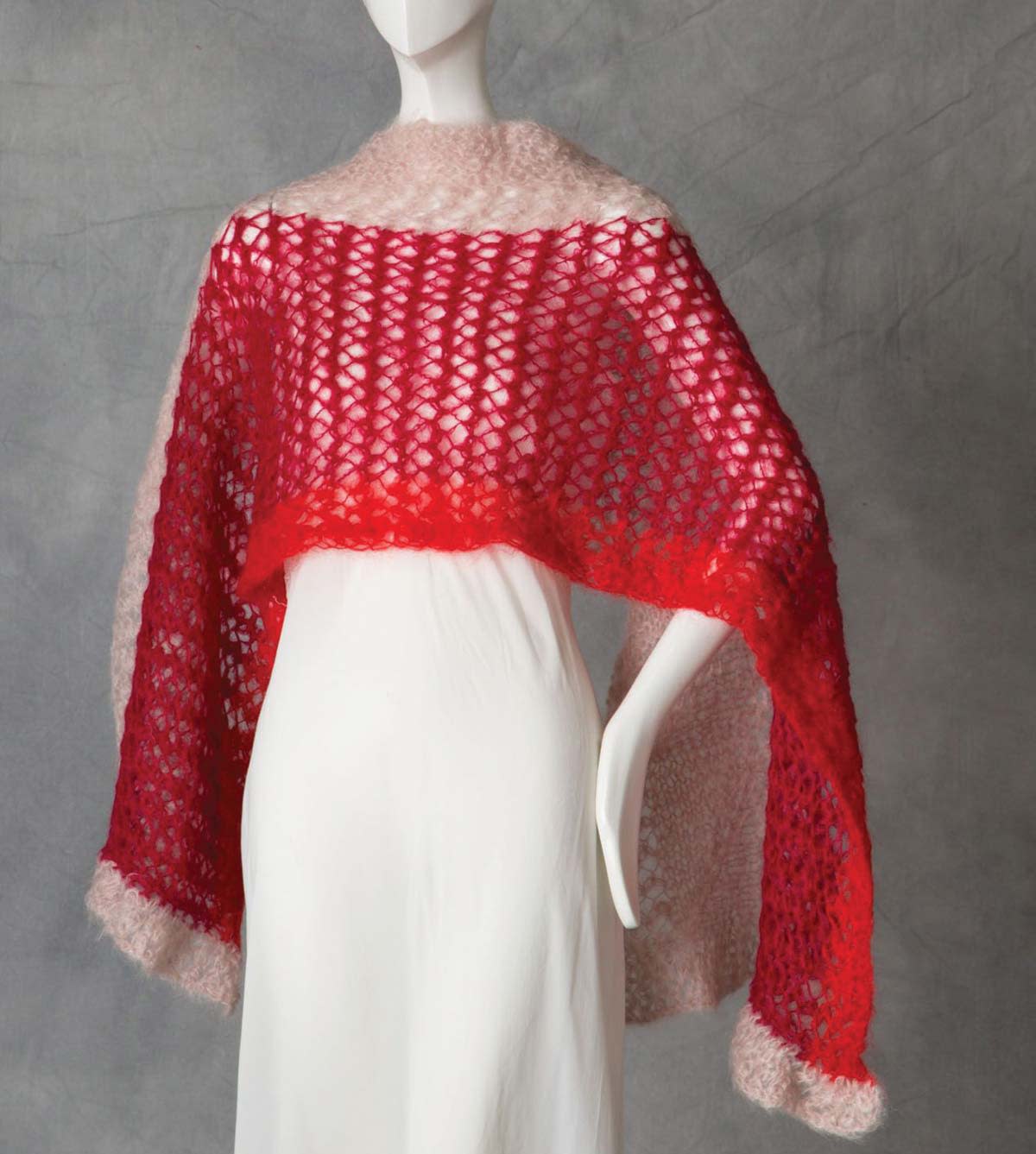 The open-neck evening shawl in reds and pink designed for versatility by Virginia Woods Bellamy. This shawl did not use her patented Number Knitting method. Handknitted. Collection of Vicky Jo Bogart. Photograph by Mark Anthony.

Virginia believed that “. . . an artisan [must] move a craft into the realm of art.” Knitters who followed the wasteful styles by anonymous designers in manufacturers’ pattern books frustrated her no end. She considered knitters intelligent and creative, and her Number Knitting technique offered endless opportunities to unlock a creative sense of design using yarn and needles. Her philosophy was consistent with the mid-century American Studio Craft Movement that emerged after World War II (1939–1945). The movement nurtured such handcrafts as furniture making and weaving toward utilitarian and artistic applications, precisely as Virginia viewed Number Knitting. The periodicals Craft Horizons and Handweaver and Craftsman launched mid-century and promoted the revival of handcrafts. Virginia advertised her Number Knitting correspondence course in both magazines from 1950 to 1952. Articles written by and about her emphasized the geometrical characteristics and originality of her work.

The use of geometric units in Virginia’s modular approach also corresponded with early twentieth-century visual artists shifting their work toward abstraction. George Braque (1882–1963) and Pablo Picasso (1881–1973) had pioneered Cubism, promoting the use of simple geometric shapes and interlocking planes to create more abstracted forms rather than striving for realism based on perspective with a single viewpoint. Cubists dissected and fractured objects into smaller geometric facets, which they then reassembled into new forms. Cubism and abstraction influenced architecture, sculpture, interior design, and fashion design. Number Knitting fractured the knitted plane, adding all-way stretch and textural surface design to knitted fabric. 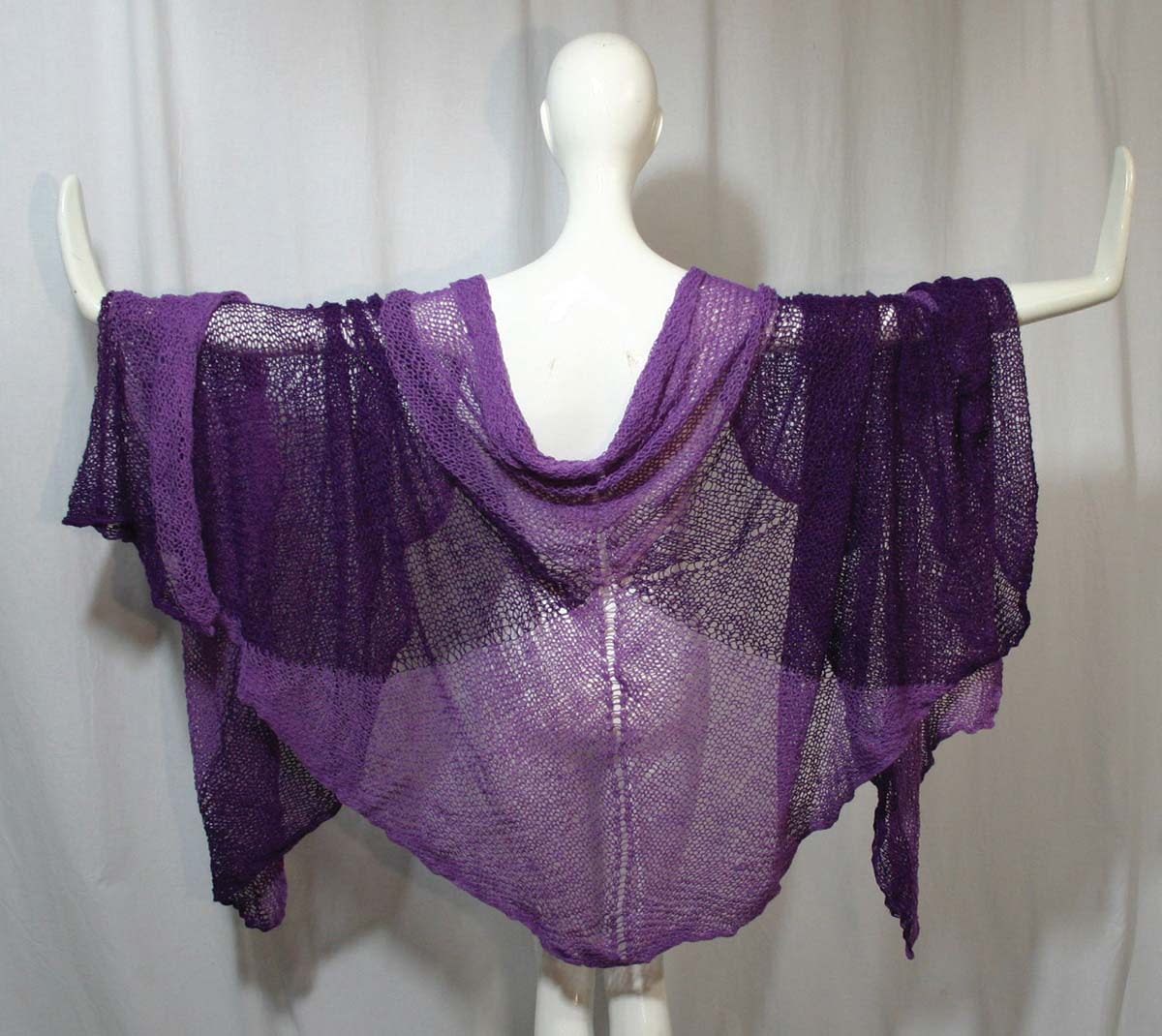 Knitting designers today may not realize they stand on the shoulders of Virginia Woods Bellamy. Virginia was among the earliest designers to claim name recognition when selling her designs and to include personal narratives that invited knitters into her creative realm. She also insisted on name credit for her photographers and students who photographed and knitted garments for her publications. She believed her innovative methods could free knitters from slavishly following patterns and encourage creative and intellectual expression in knitting. Her design philosophy and aesthetic relate remarkably well to contemporary concern with the wastefulness in mountains of purchased and discarded clothing that results from “fast” fashion. Number Knitting promotes sustainability through the deliberate and practical application of handcraft, minimal waste, the joy in creative making, and mindful consumption of classic designs. 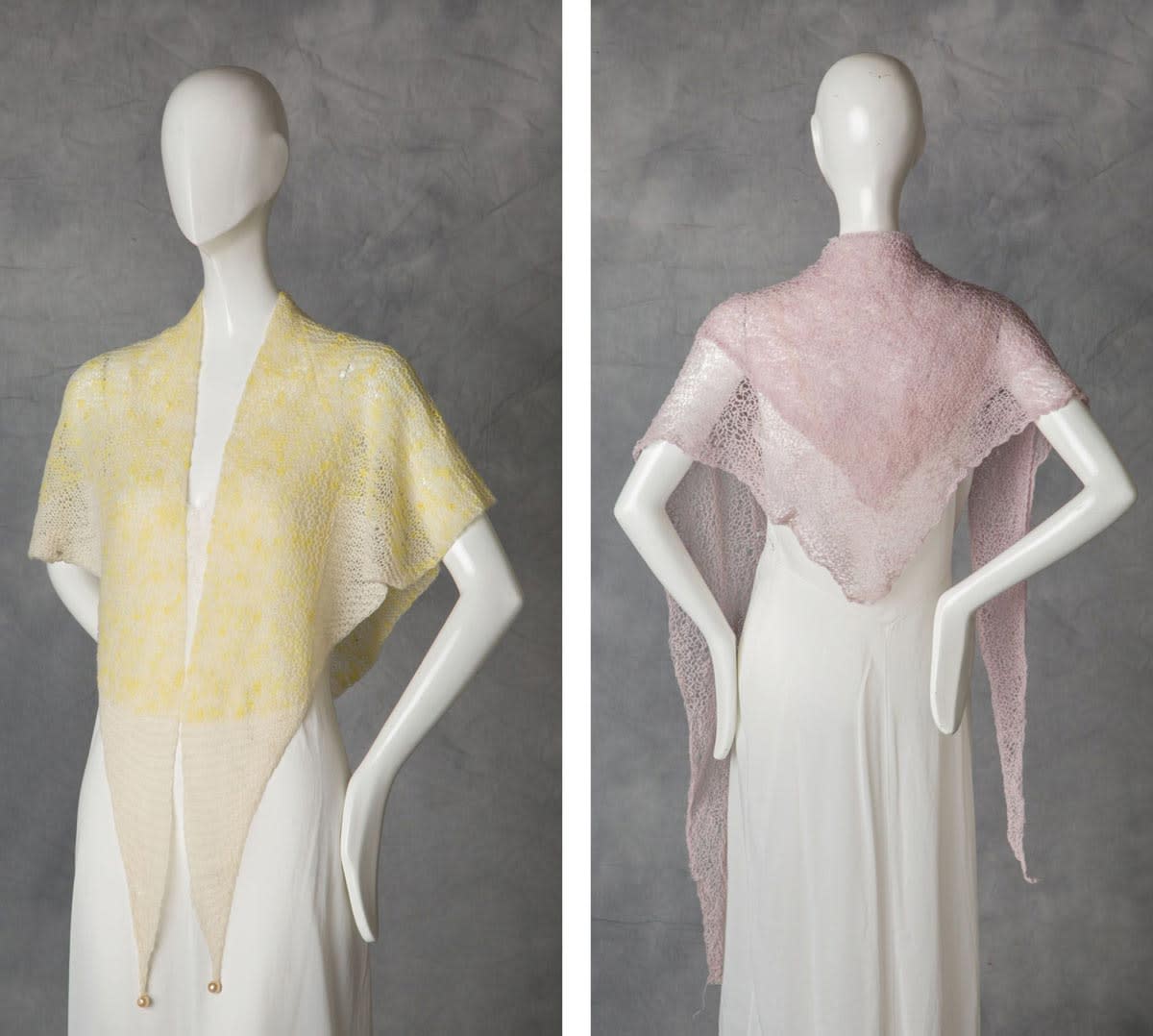 Ann W. Braaten is an associate professor of practice at North Dakota State University (Fargo) in the Department of Apparel, Merchandising, Interior Design and Hospitality Management and curator of the Emily Reynolds Historic Costume Collection. She studies the material culture of women to reveal their artistry and the contributions they made to their families, businesses, and society. She thanks Vicky Jo Bogart for recognizing the ingenuity and artistry of Virginia Woods Bellamy’s knitted work and including it in her collection.

Susan Strawn researches and writes stories she finds in textile history. She is professor emerita at Dominican University (Chicago), a PieceWork contributing editor, and author of Knitting America: A Glorious History from Warm Socks to High Art (St. Paul, Minnesota: Voyageur, 2007). She thanks the Seattle Public Library for generous access to the Eulalie and Carlos Scandiuzzi Writers’ Room.

Thias article originally was published in the Winter 2019 issue of PieceWork.