For Richer, Not Poorer: Marrying an English Lord

They were perfect for each other—he had a title, she had a fortune—and so they wed.

Devotees of the PBS series Downton Abbey know that Cupid had nothing to do with the 1888 marriage of Robert Crawley, Fifth Earl of Grantham, to Miss Cora Levinson, heiress to her American father’s dry-goods fortune. The plain—and to Robert, the painful—truth was that he desperately needed Miss Levinson’s money to maintain his ancestral estate with its mansion, extensive landholdings, crofts, and numerous dependent souls. A mercenary motive, perhaps, but he had little alternative. Neither had Cora, whose father had pressured her to marry a British aristocrat.

Marrying an English lord was a complex endeavor. Between 1878 and 1914, dozens of young American heiresses—aggressive mothers in the vanguard, sisters often in tow—packed their steamer trunks and set sail for England in search of a husband. More than a hundred of these so-called “dollar princesses” found one. Jennie Jerome (1854–1921), who became the mother of Winston Churchill (1874–1965), was one of them. Another was Consuelo Vanderbilt (1877–1964); she became mistress of Blenheim Palace when she married Charles Spencer-Churchill (1871–1934), who had recently assumed the title of Duke of Marlborough and all it conveyed and was Winston Churchill’s uncle.

Only peers of the realm were desirable targets. That meant eldest sons because they held the right of primogeniture (“first birth” in Latin), the law ensuring that the power inherent in vast wealth passed intact from eldest son to eldest son, generation after generation, not divided among one’s children. Eldest sons inherited everything. Daughters were expected to make advantageous marriages of their own. Younger sons merely received allowances.

Linked to primogeniture was entail, a safeguard mechanism that allowed whole estates to be tied up in trust so they could not be mortgaged or broken into smaller plots and sold. Because entail, too, required the heir to be male, Lady Mary Crawley, the eldest child of the fictitious Grantham family, could not inherit Downton Abbey. The fear was that a female eldest child who married would be turning over the estate to her husband’s family when she died. Or, if she remained single and therefore childless, her line would die out. By law, Downton Abbey had to pass to Lord Grantham’s closest male relative, a situation that set the series’ gears in motion.

Since eldest sons also inherited estate debts, it was no secret that they coveted the large dowries that American heiresses represented as passionately as the young women craved the titles that the Englishmen offered in exchange. Still, an heiress’s campaign to find a lordly mate required shrewd planning. It began with a magnificent wardrobe from Charles Frederick Worth (1825–1895), the father of haute couture. An Englishman with an atelier in Paris, Worth loved Americans. An American would not insult Worth by later altering his masterpieces or commit the gaffe of wearing a reception gown to the theater. More important, she purchased eighty to ninety dresses each season (valued at more than $500,000 in today’s dollars) to the Parisienne’s three. No detail was too expensive: pearls on her petticoat? Why not?

After Paris, it was off to London to gain entrée into society. First, a respectable address: Claridge’s or Brown’s Hotel, or perhaps a rented but impressive house in Mayfair. An American lacking an influential friend or relative in London needed to cultivate an English sponsor, someone well established, well respected, and willing to introduce her to the right people. That she would also orchestrate the young woman’s all-important presentation at court went without saying.

London’s high season (prime time for husband hunting) was limited, extending from Easter, when everyone who was anyone came up to the city, until the end of July, when they retreated once again to the country. Every step of the way required the utmost propriety. Yet it was quite acceptable for a young woman to bribe a reporter for The Morning Post, News of the World, or Tatler to name her among the distinguished attendees at a social event and, for an additional sum, add a few flattering words.

Young Englishmen were infatuated. Impetuously, dozens proposed. The couple’s engagement would be announced in the next edition of The Morning Post. Success, however, could not be declared until his family’s solicitors and her family’s lawyers had hammered out a marriage contract agreeable to both parties. In addition to a vast sum of money for her dowry, a caring father would set up an independent allowance for his daughter to ensure her well-being should his son-in-law prove to be a spendthrift.

The wedding itself was invariably a lavish affair: elaborate floral arrangements, wedding gown by Worth, multiple clergy, a symphony orchestra and opera singers, thousands of guests, extravagant gifts. The nuptials might take place in the United States or in Europe although the groom’s parents did not feel obliged to attend if the couple married anywhere but England.

After a honeymoon on the Continent, it was home to the family estate and a centuries-old way of life that did not include shopping, lunching, glittering parties, and fascinating people. The new mistress’s biggest excitement might be opening village fairs and judging roses. Running an enormous house was an unaccustomed challenge complicated by servants who took stubborn pride in an established hierarchy with routines etched in stone. It was up to the new bride to learn how the system worked and to comply without trying to change it. 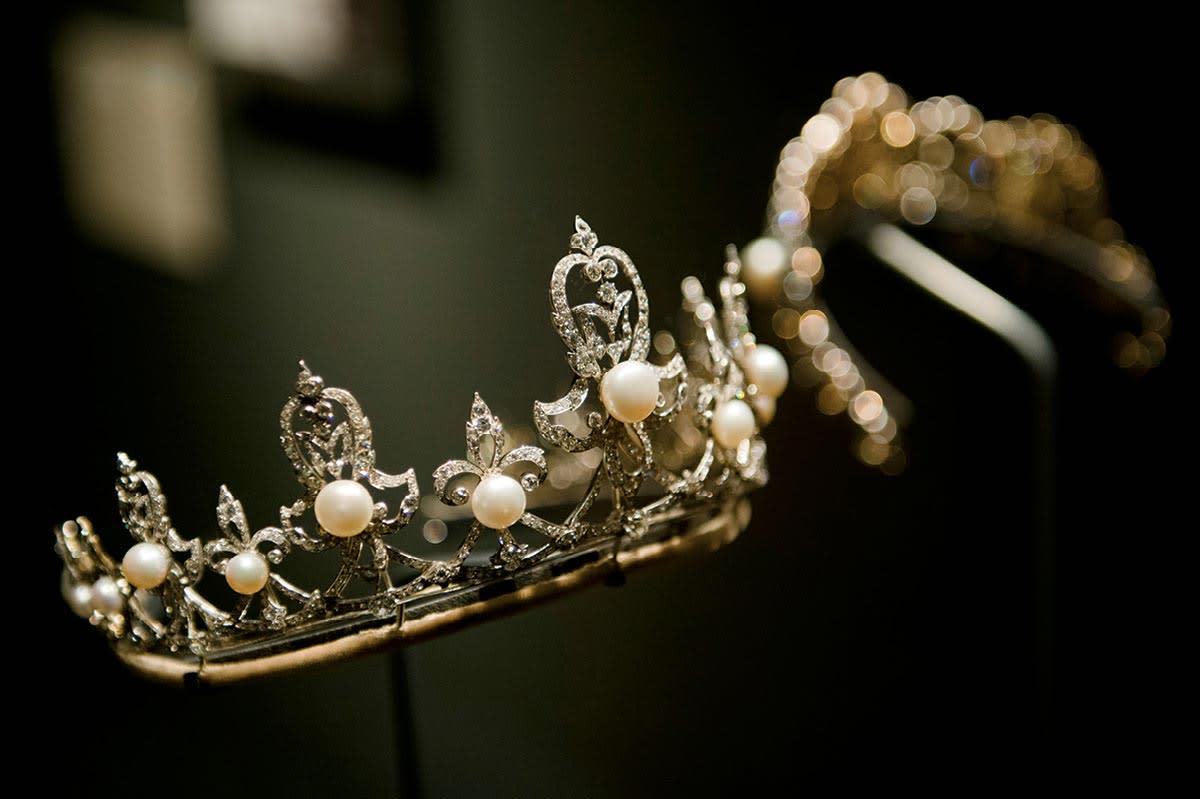 Few brides furnished their own homes, especially if these homes were ancestral mansions. Downton Abbey’s Lady Mary Crawley informed her onetime fiancé, Sir Richard Carlisle, that aristocratic families did not shop for furnishings; they inherited them. Tasteful or quirky, accumulated rather than curated, inherited furnishings were there to stay. If the new mistress did not like the elephant-foot stool, the mummy case, or the balding stuffed grizzly bear in the drawing room, too bad. Many stately homes were dismal and bone-chillingly cold. Some were patently decrepit. But live there she must, sometimes alongside a cold, disapproving mother-in-law and/or sisters-in-law who still resided in the house.

Other rude awakenings often followed. She was rushed into conceiving and bearing an heir (male, of course) and “a spare” as Consuelo Vanderbilt Marlborough blithely referred to her own second-born son. But once a woman had been wooed, wed, and delivered of an heir, her husband’s job was done. Many a new husband went shooting for weeks on end or resumed a life of horseracing, cards, and mistresses. More than one was a first-class cad. 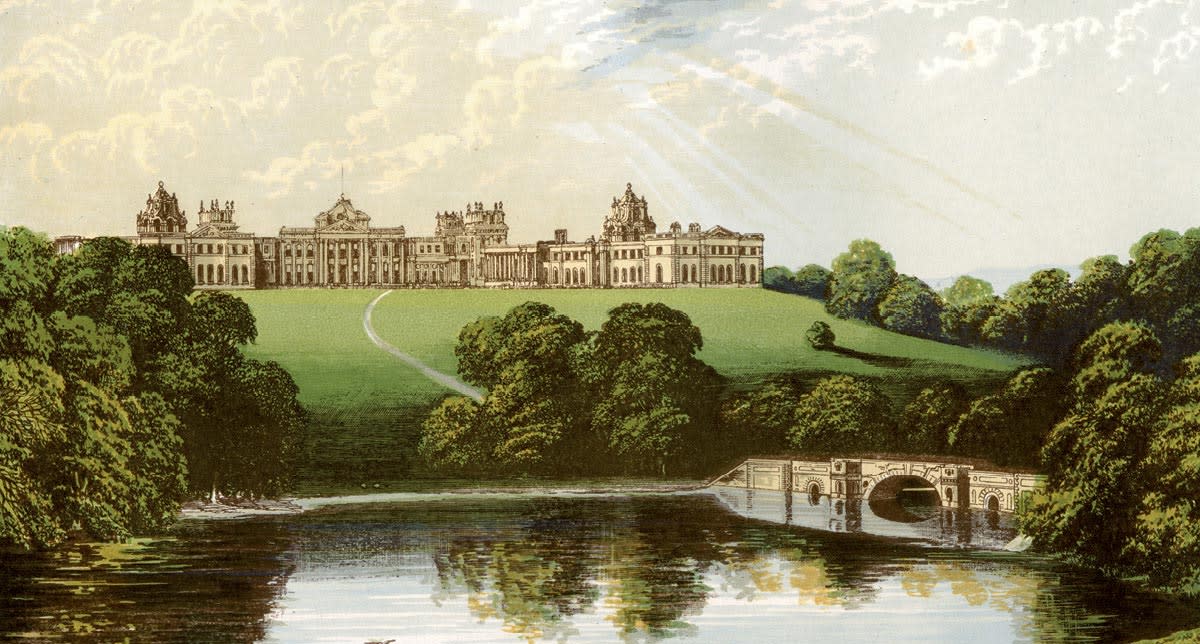 Blenheim Palace, Oxfordshire, home of the Duke and Duchess of Marlborough. One of Britain’s greatest stately homes, Blenheim was intended to be a gift from a grateful nation to John Churchill, Duke of Marlborough (1650–1722), after his victories over the French during the War of the Spanish Succession. A print from A Series of Picturesque Views of Seats of the Noblemen and Gentlemen of Great Britain and Ireland, edited by Reverend FO Morris, Volume I, William Mackenzie, London, circa 1880. Wood-engraved plates after paintings by Benjamin Fawcett and Alexander Francis Lydon. Photograph © The Print Collector/Print Collector/Getty Images.

As Downton Abbey’s Violet, Dowager Countess of Grantham, reminded her son Robert, troubled aristocratic couples did not admit to marital difficulties; they worked around them. One spouse might embark on lengthy periods of travel or take up residence in the London townhouse while the other remained in the country. Consuelo and “Sunny” Marlborough, who loathed one another deeply, lived apart for fourteen years before divorcing in 1920. They were an exception, however: few English couples divorced lest they bring scandal upon the family. (Extramarital affairs, on the other hand, were not regarded as scandalous.)

If the potential for misery was so great, why was the fresh, young American beauty, who could have married well without leaving home, so eager to renounce her U.S. citizenship and give away an enormous share of her father’s wealth to a cash-poor English lord? What was in it for her? Prestige. Respect for her new status extended to her family, even to the United States as a whole. She and her family, who may have been considered nouveaux riches by America’s old-money society, were instantly legitimate, eminently respectable. She had a title, her husband’s family history, social dominance, and a tiara that she was entitled to wear at state occasions to prove it. Some wives, through their husbands, also enjoyed a measure of political power that could numb even the lingering sting of an unhappy marriage.

The wave of heiresses seeking aristocratic marriages crested around 1895. In 1910, King Edward VII died. Unlike him, his son and successor, King George V (1865–1936), and Queen Mary (1867–1953), disdained frivolity of every sort. Further, English to the core, they did not like Americans, husband hunters in particular. Eventually, heiress/peer mergers came to be recognized for what they were—cupidity, pure and simple—and the era was over.

Mary Polityka Bush, though not a wealthy heiress, is married to a prince of a fellow with whom she has lived happily ever since they married in 1977.