With the fall leaves as my visual inspiration, I chose a page from Weldon’s Practical Needlework that introduces Mountmellick embroidery and shows 20 ways to embroider leaves.

A handful of leaves have begun their change from a rich palette of greens to soft yellow, soon to be a brilliant dark marigold on the honey locust trees in my yard. With the fall leaves as my visual inspiration, I chose a page from Weldon’s Practical Needlework that introduces Mountmellick embroidery and shows 20 ways to embroider leaves.

Volume 6 of Weldon’s explores this handsome, strong, and durable type of embroidery, which makes it eminently suitable for articles that get substantial use and wear. A convent in Mountmellick, Ireland, where the embroidery originated, gives its name to the method with the purpose of “assisting distressed ladies and others by the sale of their work.” Knitting cotton was embroidered onto a fabric of sturdy cotton twill, similar to denim. The white on white in simplified shapes of flowers and leaves resulted in a highly raised embellishment. 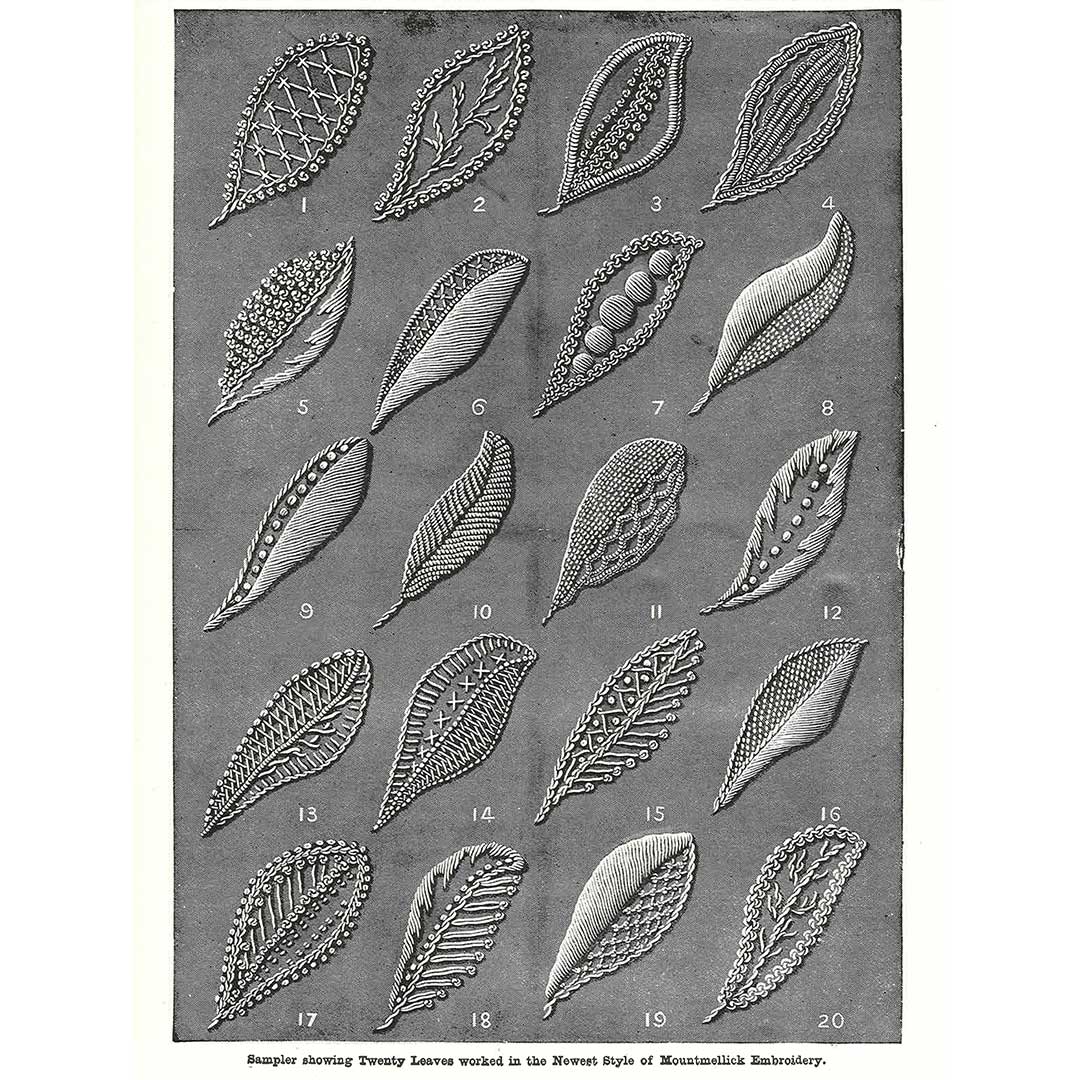 The possibilities are endless given the myriad of embroidery stitches, but this illustration placed a thinking cap on my head. How can I translate some of this into a knitting project? Because two of my main activities are breathing and knitting, this seemed like a vital quest for me. The obvious adaptation for knitting is to simply embroider onto a knitted background, with stockinette stitch being a smooth surface option. Various fibers, from fine knitting yarn to embroidery floss may be employed, although generally not as fine in gauge as Weldon’s Mountmellick embroidery. See the example below of my design for “Gauntlet Gloves to Knit and Embroider,” which was featured in the November/December 2017 issue of PieceWork. I used embroidery floss on a stockinette ground of fine alpaca yarn. 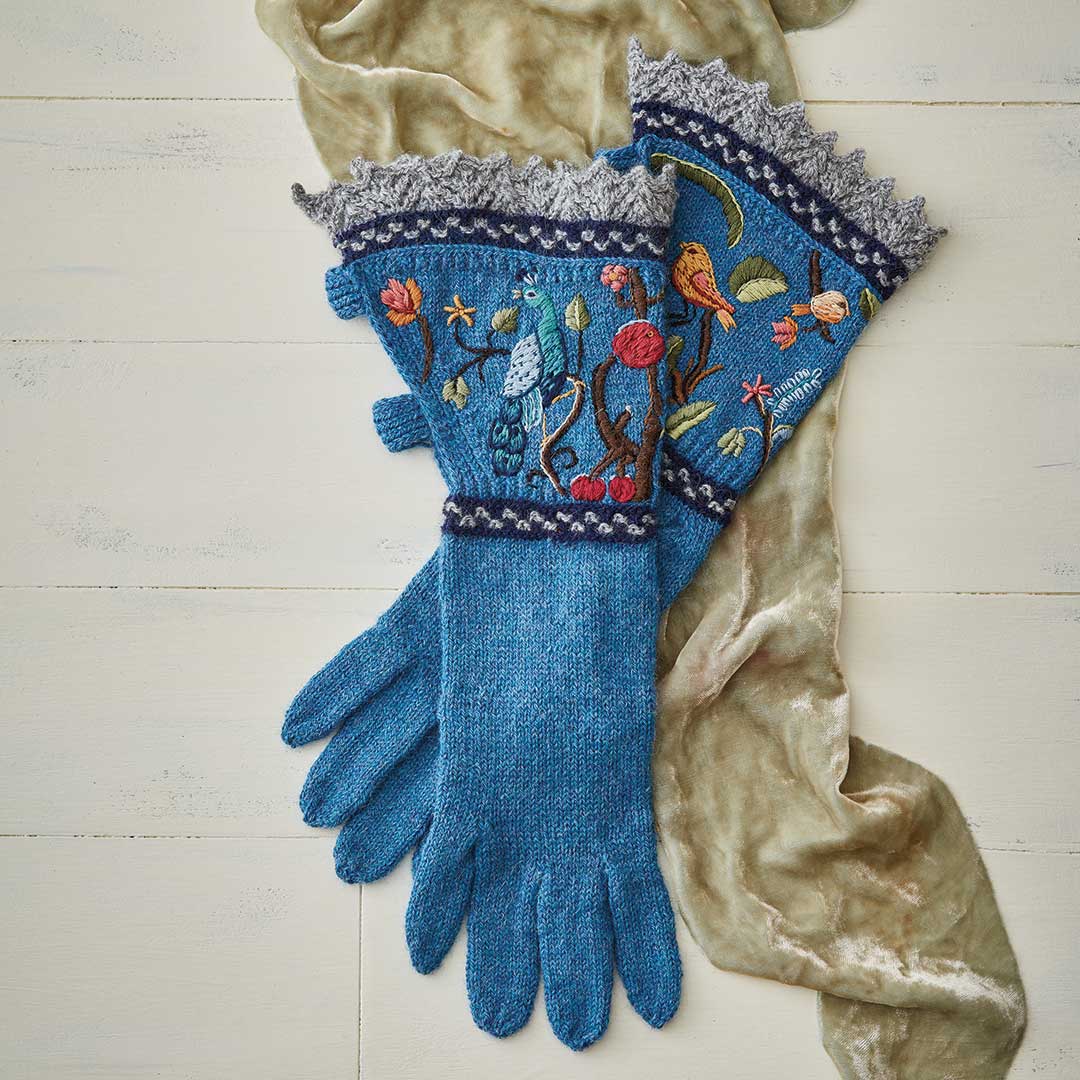 Make an entrance with Vicki Square’s stunning knitted and embroidered gauntlet gloves, which were featured in the November/December 2017 issue of PieceWork. Photo by George Boe.

The embroidered leaves inspired me to knit leaves as separate pieces, which were then stitched on as a sculptural element to a bag. I knit one, two, and more textures in these leaves. The first small leaf I created is all garter stitch with slipped stitches for a smooth outer edge, and it lays flat upon completion. For the second leaf, I worked the center in stockinette stitch to emulate a leaf midrib, flanked on either side by garter stitch, and edged it with slipped stitches. For my third design, I flanked the center midrib stitch with garter stitch on one side and seed stitch on the other side, and I made it larger so that one can more readily see the difference in the knit-stitch textures. The leaves with the center knit stitch tend to rise up three-dimensionally thus appearing more sculptural. 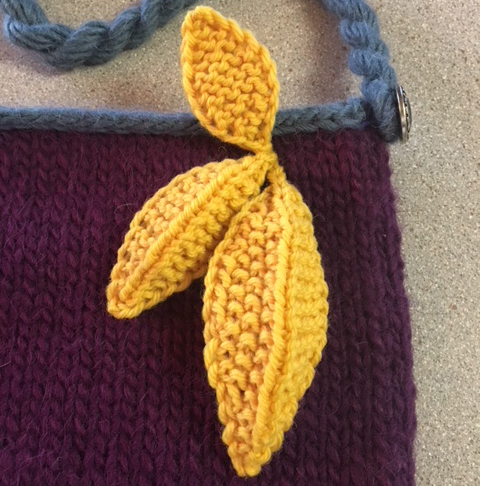 My method is straightforward, increasing and decreasing for shape. I offer my Two Textures Leaf design for you to experiment with. In my samples, I used a light, worsted-weight wool with a pair of size 3 (3 mm) knitting needles for a firm gauge.

Note: All slipped sts are worked purlwise with yarn in front, and make one is a backward-loop increase.

Innovate with colors and application—just play with the possibilities. Here is a handbag I designed using both embroidery embellishment and knitted leaves as a three-dimensional ornament. Combine efforts to your heart’s content. 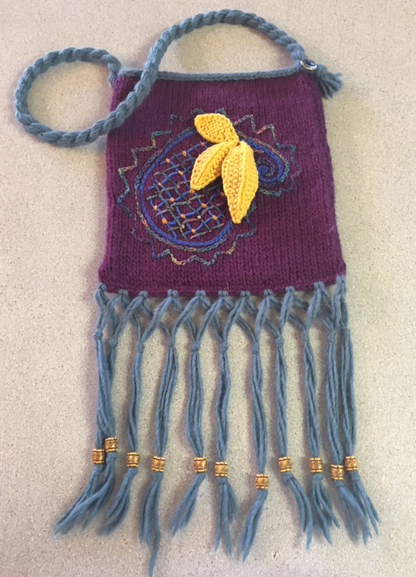