Embroidery and Symbolism of the Eastern Orthodox Liturgical Vestments

Explore the history behind these embellished garments.

Silk textile with Seraphim and Crosses; 17th century. Ottoman. Possibly a provincial imitation of textiles produced in Constantinople and Bursa. Note that the Greek letters of the inscriptions have been reversed. The size and shape of the piece suggest that it formed part of a phelonion, or chasuble. Courtesy of the Metropolitan Museum of Art, Rogers Fund, 1908

As a seamstress, I am always fascinated by the beauty of textiles, high-quality handmade garments, and needlework. I grew up as a Greek Orthodox Christian, and every time I attended church, I was in awe of the priest’s vestments: brocade robes in rich colors with embroidered animals, flowers, monograms, or crosses on them.

In 1995, I had the opportunity to work as a short-term liturgical tailor in a private shop in Athens, Greece. Priests would visit the shop to place custom orders of liturgical vestments, particularly phelonia (altar robes) and epitrachelia (stoles). They would select silk or brocade from the owner’s fabric supply and come for fittings. The owner would cut fabric pieces according to the pattern and then hand them to me and his principal seamstress to sew these pieces together and attach appliqués of elaborate embroidery patterns and unique trims.

For the priests, these vestments communicated the prestige of the Orthodox Church they served and the continuing traditions of the Byzantine Rite (see note 1). For me, such exquisite robes captivated my curiosity to learn more about their background: Why do these vestments differ among the ranks of the clergy? Why do the robes have different colors? What do the embroidered designs symbolize?

If you have ever attended an Orthodox divide liturgy, you may have noticed the priest’s different vestments depending on the ceremonial occasion. These vestments evolved from the ordinary dress of the common Roman people. Before the early fourth century, priests conducted the liturgy wearing the normal street dress of the Roman Empire. Over time, as fashions changed, the Orthodox church developed many local traditions in liturgical garments to distinguish the clergy from each other and the worshipers. Today, ranks of clergy (bishops, priests, deacons) wear special robes with elaborate embroidery and patterns for various liturgical functions. These robes vary in colors throughout the liturgical year depending on the type of celebration and the season. 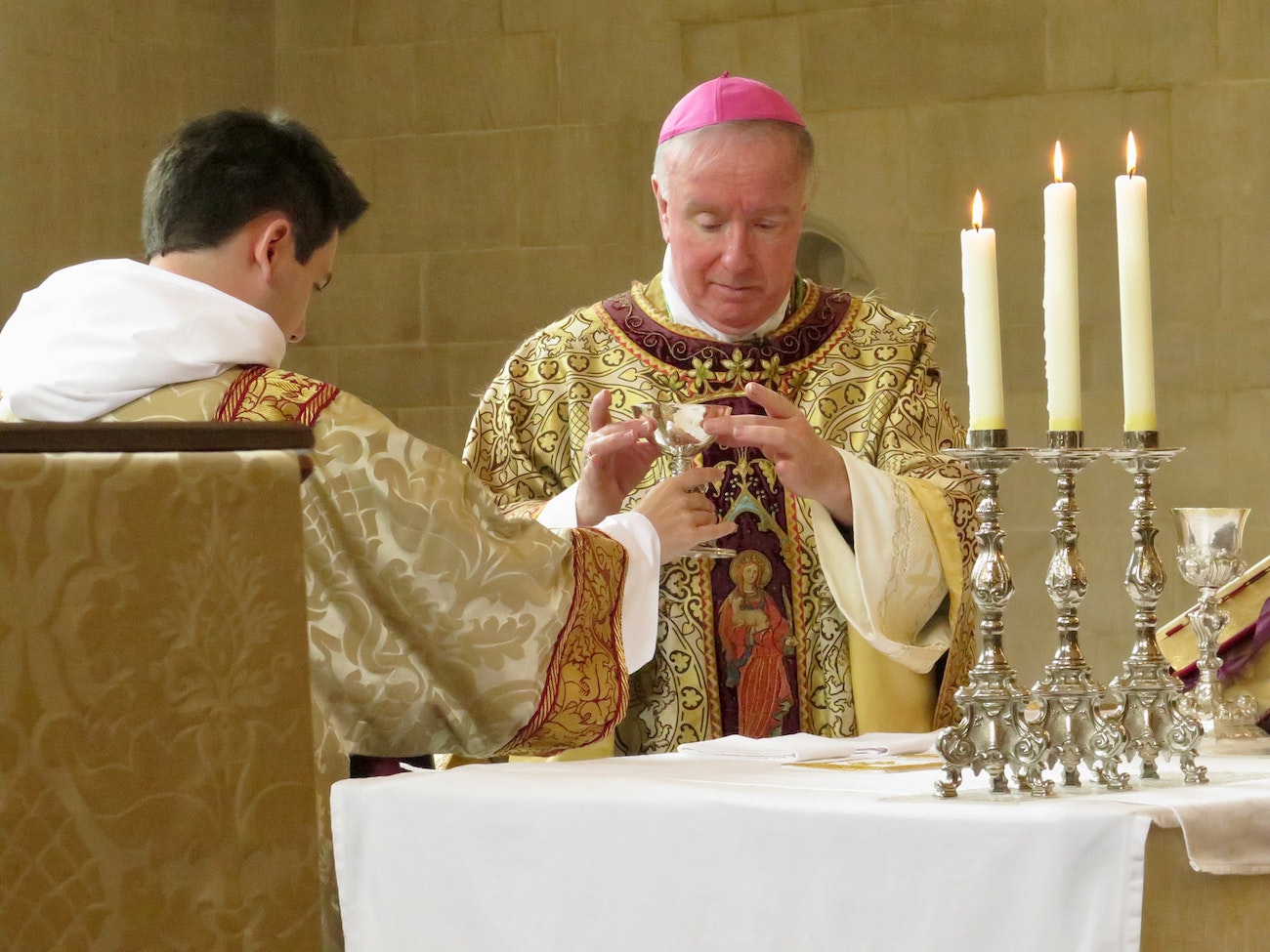 In the late Byzantine period (1261–1453), vestments were decorated with embroidery on plain silk textiles. But the post-Byzantine period witnessed the rise of patterned silk textiles for liturgical use. A variety of repeated ornamental motifs were woven on the silk cloth, often in gold and silver threads. These came from the specialized textile workshops of Bursa and Istanbul in the Ottoman Empire. The purpose of the embroidery and patterns was twofold: to differentiate the garments and insignia between the highest and lower ranks of clergy, and to represent religious themes. 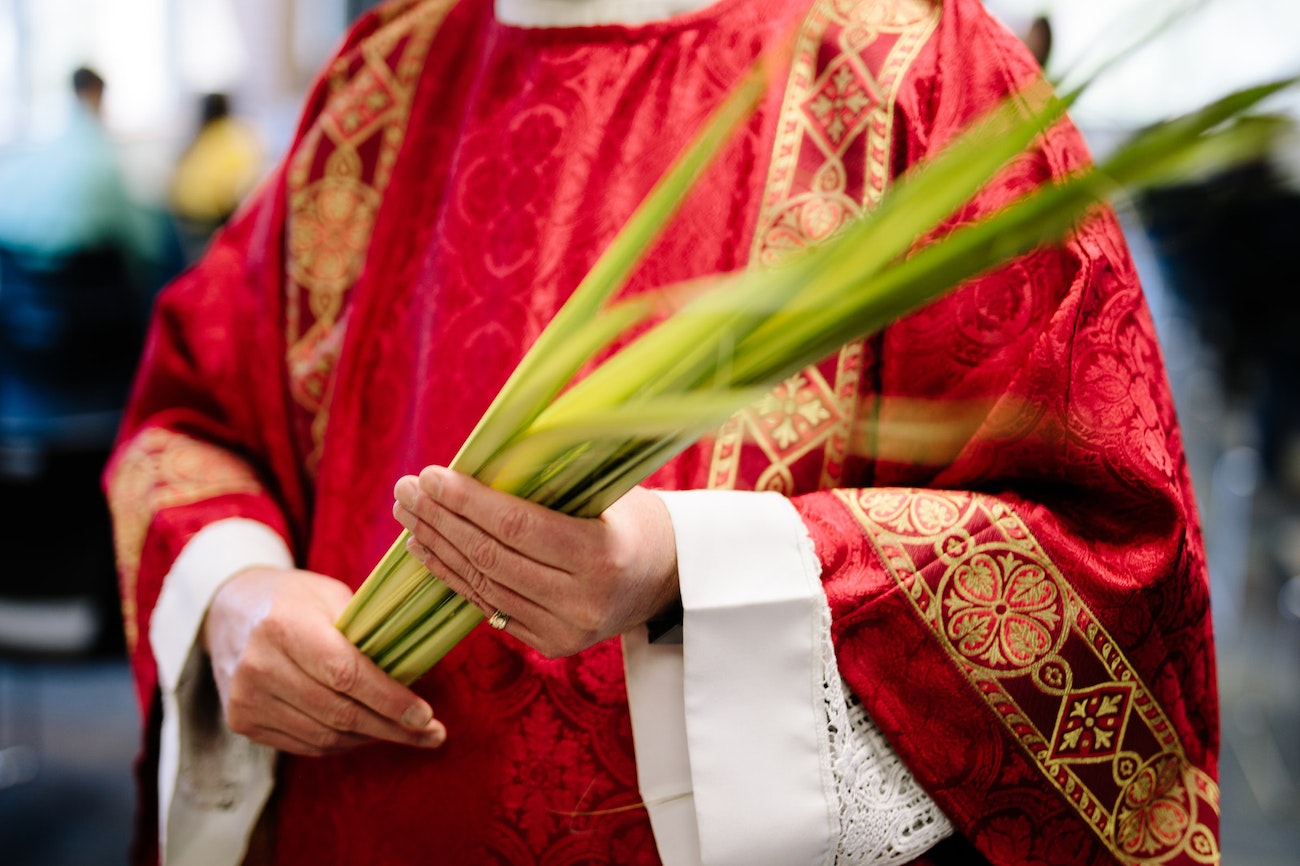 A great illustration of elaborate embroidery on vestments is the post-Byzantine icon of Saint James of Jerusalem housed at the Benaki Museum in Athens, Greece. The icon is the creation of the Greek artist Stephanos Tzangarolas (1688) and is part of a sanctuary door at the Church of the Holy Trinity in Corfu. On the icon, Saint James is dressed in the vestments of a bishop in the seventeenth century because he was considered the leader of Jerusalem. The outer fabric of his phelonion depicts repeated cross patterns representative of the Ottoman silk textiles, with its lining on a red damask (see note 2). His epitrachelion depicts elaborately embroidered figures in silk and gold such as priests, kings, and prophets of the Old Testament. His clothing on this icon represents his holiness and role as a high priest. 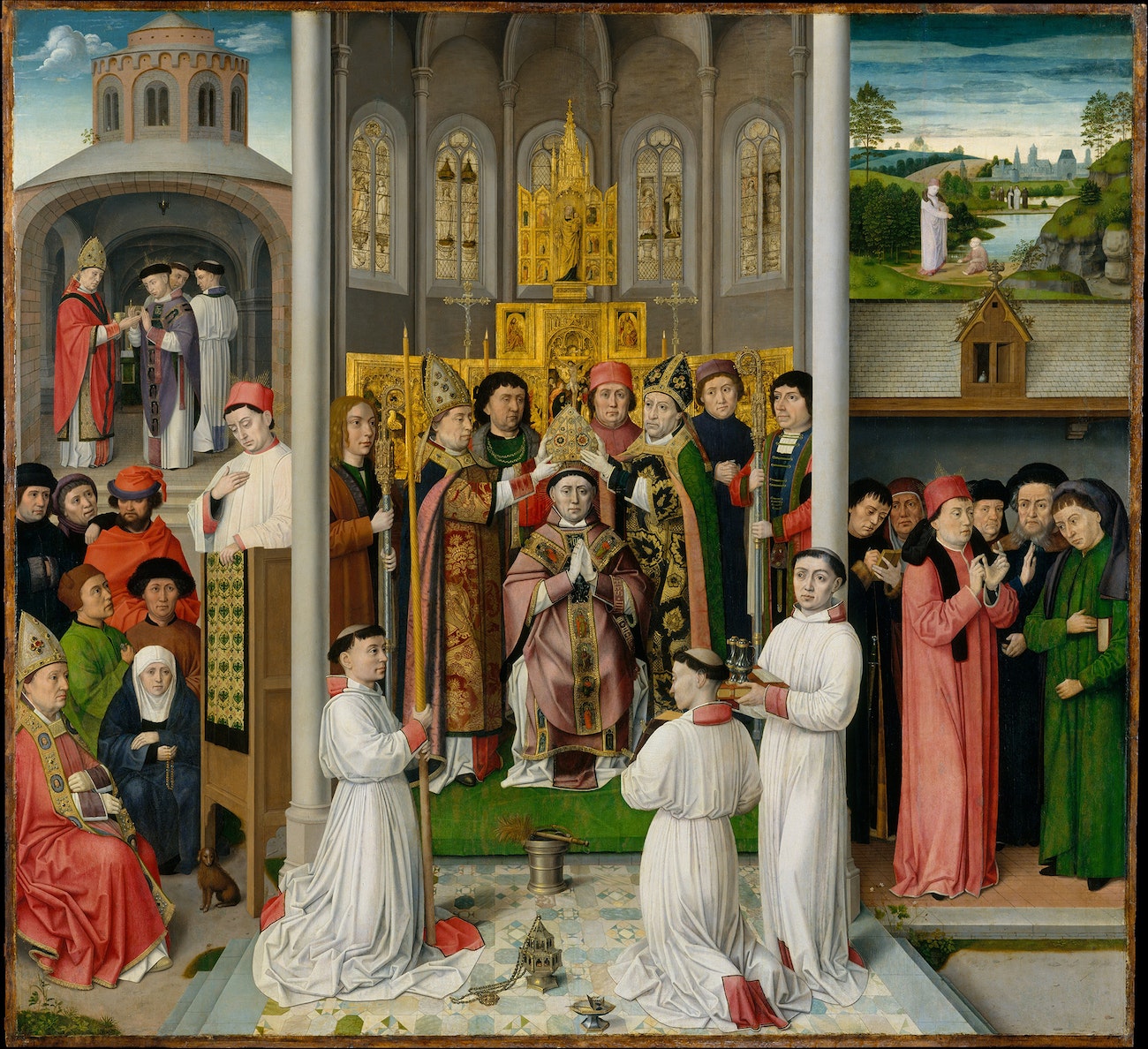 Scenes from the Life of Saint Augustine of Hippoca; 1490. Master of Saint Augustine, Netherlandish. Central panel of a triptych dedicated to Saint Augustine (354–430). Of particular interest in this panel are the detailed and richly depicted varieties of ecclesiastical vestments and altar implements. Courtesy of the Metropolitan Museum of Art

Before the fourth century, Greek and Romans priests were clothed in the typical street dress of the laity. As fashions changed, they began wearing distinctive vestments during the liturgies to set themselves apart from the laity’s ordinary dress and be seen as servants of God. In the twelfth century, a new trend emerged: embroidered decorations and patterned silk textiles. The purpose of these changes was to indicate hierarchy among the clergy, to correspond to different liturgical feasts, and to depict the mysteries of the divine liturgy. There was also a change in the color scheme that highlighted the mood for each liturgical season and celebration.

Harikleia Sirmans is known for her many talents. Among other things, she’s an academic librarian and an expert dressmaker. She loves sewing and needlework, and every evening she crochets to relax. She was born and raised on the island of North Evia, Greece. Today, she lives with her husband in Valdosta, Georgia, and she makes beds, sweaters, and collars for their furry kids. Visit her at grecianneedle.com.