Embroidered Piña Fabric from the Philippines

Learn about piña cloth, woven from fibers from the leaves of pineapple plants, and the delicate and intricate embroidery that embellishes it.

Accessory set made of embroidered piña cloth, Philippine, about 1850. Brooklyn Museum Costume Collection at The Metropolitan Museum of Art, Gift of the Brooklyn Museum, 2009; Gift of Jean L. Keith in memory of Christine Keith, 1968

For those who knit and spin, yarns and fibers are available from quite a range of materials, some as unusual as milk, bananas, pearls, and rose stems. For those who embroider, linen, cotton, silk, and wool are the most frequently used fabric grounds.

There is another fabric you might want to consider, particularly if you want an elegant, sheer and flowing fabric: piña, made from the fibers in pineapple leaves. Weaving piña cloth was a specialty of small family enterprises in the central region of the Philippines. The heyday of its manufacture was from the late 1700s to the early 1800s, under Spanish colonial rule. To make the cloth, the leaves of the pineapple plant are scraped until threads of inner fibers are revealed. The fine inner fibers, which are ivory white, are then spun and woven into a fragile-looking, but actually strong, cloth.

This cloth might be embroidered, often in the same ivory-white color as the fabric itself. Women in the central Philippine municipality of Lumban, in the province of Laguna were taught embroidery by Spanish Franciscan nuns starting in the early 1600s. First introduced as a way to keep the wives of farmers and fishermen busy, the embroidery evolved into an important way to contribute to a family’s finances. In fact, the prevalence of this needlework has led Lumban to become known as the embroidery capital of the country. Stitches used in this traditional piña cloth embroidery include buttonhole and satin; pulled-thread techniques such as Russian drawn ground filling are also used. This pulled-thread embroidery is similar to Hardanger. 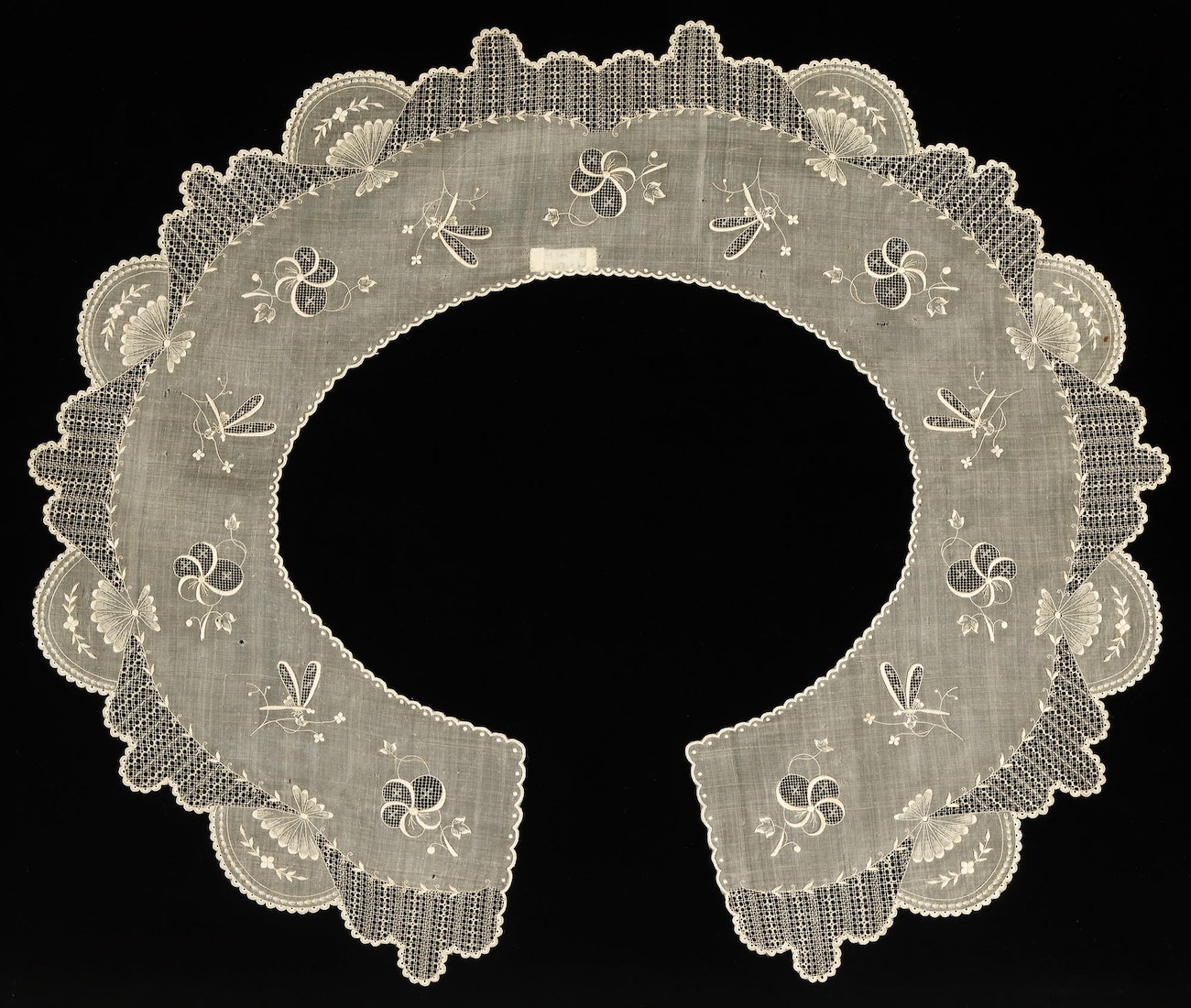 In 1938, there was an exhibition of Philippine embroidery, primarily cotton worked on piña cloth, at the Metropolitan Museum of Art in New York City. A reviewer of the exhibit described two main types of embroidery. One had the impression of a “shadow embroidery,” where a pattern worked on white cotton fabric is applied under the ground fabric. The other was a pattern, primarily of tiny sprigs of flowers, worked as an overall pattern. Both types were embellished with openwork, usually in the borders.

Lumban is known for producing the barong tagalog, which translates to “Tagalog dress” or “outfit.” It is the traditional long-sleeved formal shirt for men and was typically made of elaborately embroidered piña cloth. With the ascendence of Western-style clothing, the wearing of it waned. However, on December 30, 1953, President Ramon Magsaysay wore it for his inauguration, thus reviving interest in the garment for formal occasions. It is now often made from less expensive fabrics, such as silk organza, polyester, or ramie, but is always embroidered. 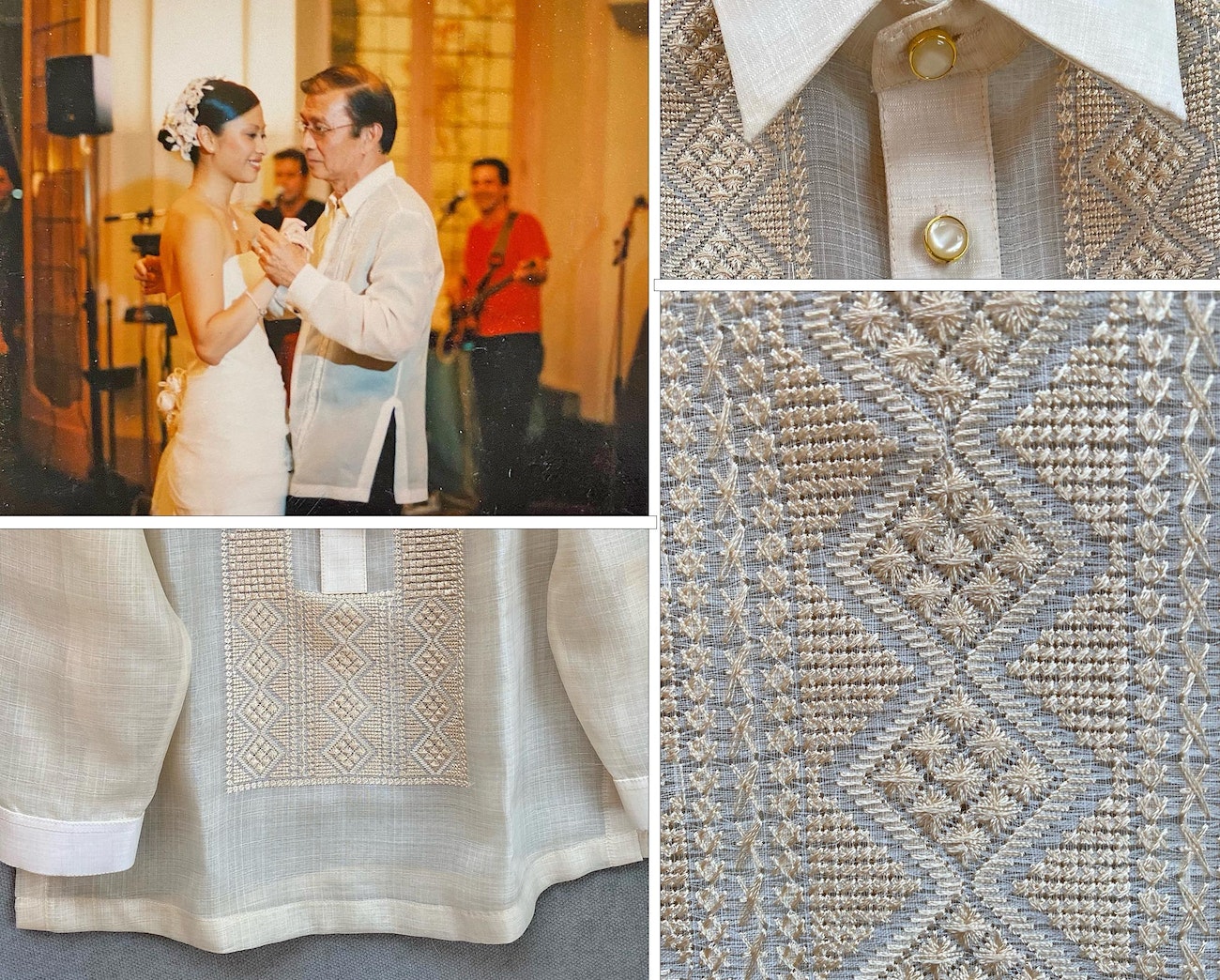 In the last decade of the 20th century, there was a revival of the heritage cloth industry because of interest by designers, businesspeople, and government agencies. Piña cloth is currently being used in haute couture garments. The cloth may be dyed using natural and synthetic dyes, and the fibers of the cloth might be a mixture of piña and silk, cotton, or a synthetic, depending upon the intended use. Embroidery has been updated, with motifs based on cultural heritage and current fashion trends. There is also a wider array of thread colors, and sequins and crystals are being used in the embroidery. 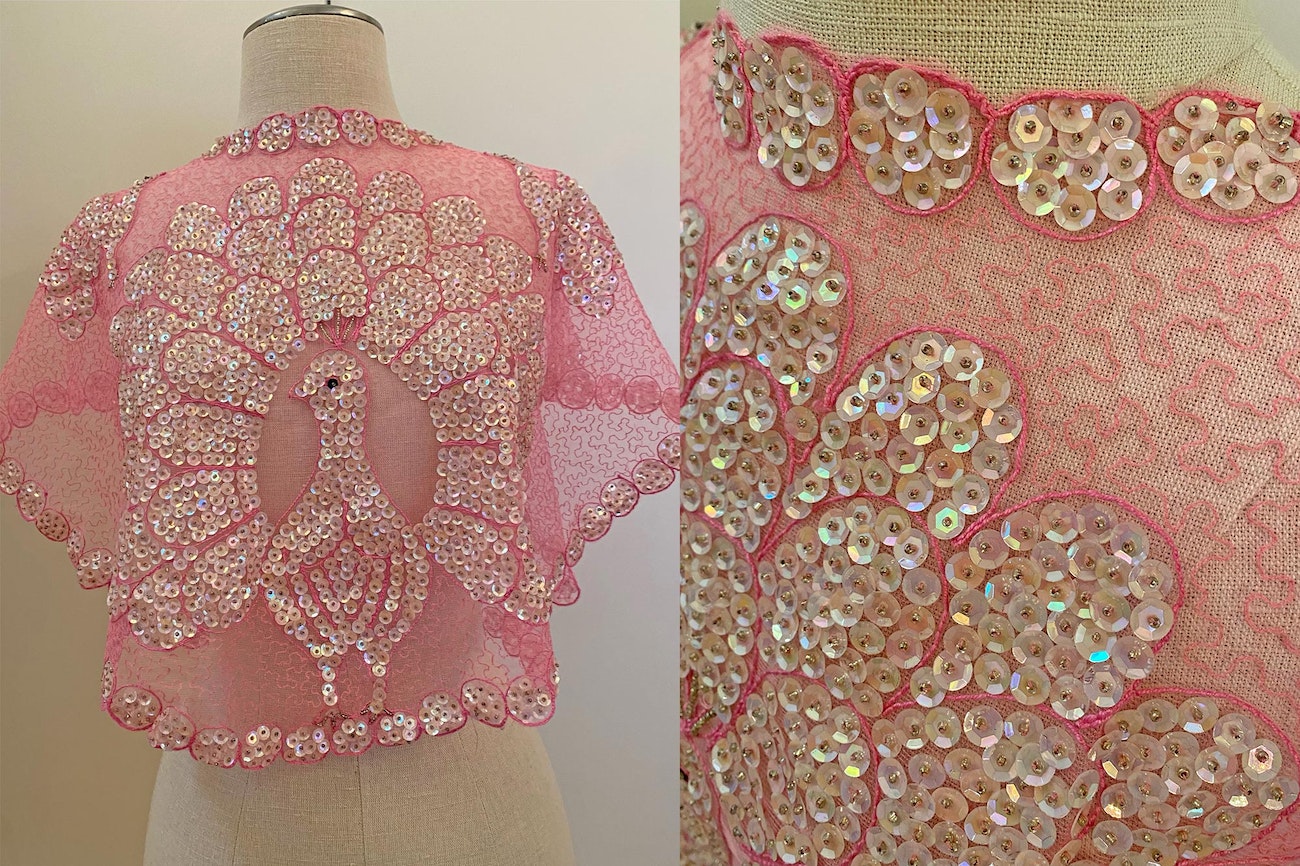 An example of a Filipino Kimona that features a peacock motif using sequins. Photos courtesy of Grace Roque Tartari

Trudi E. Jacobson, who lives in upstate New York, has a hard time resisting the siren song of a host of fiber- and needle arts. She is currently wrangling with goldwork and bobbin lace. She also contributes needlework-related content to Wikipedia.