February is National Embroidery Month. It is no secret that we here in the PieceWork office love embroidery!

Laurel Johnson was twelve years old when she stitched this project for the magazine. She was, and is, an avid needleworker. Photograph by Joe Coca.

February is National Embroidery Month. It is no secret that we here in the PieceWork office love embroidery! In the November/December 2013 issue, we asked Laurel Johnson, then a seventh grader from Loveland, Colorado, to use one of the patterns in the “Easy Stitcheries for Little Fingers” column in the October 1926 issue of Needlecraft Magazine to stitch a vintage kitchen towel. 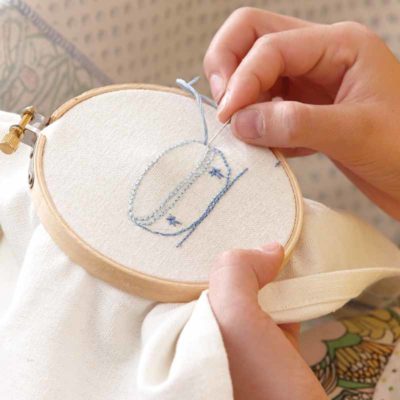 Laurel Johnson embroidering her kitchen towel. She re-created one of the patterns in the “Easy Stitcheries for Little Fingers” column from the October 1926 issue of _Needlecraft_ Magazine. Photograph by Joe Coca.

Laurel’s result is shown here. She used a purchased cotton tea towel, DMC embroidery floss (#332 Baby Blue, #334 Medium Baby Blue, and #827 Very Light Blue), and a sharps needle. In honor of National Embroidery Month here is the text from the “Easy Stitcheries for Little Fingers” column published in the October 1926 issue of Needlecraft Magazine with no alterations or corrections. Enjoy! —Elizabeth

Easy Stitcheries for Little Fingers by Mrs. Will T. Perry

“A dear little girl sat under a tree, Sewing as long as her eyes could see. Then kissing her work and folding it tight, She said, ‘Dear work, good night, good night!’”

First page of the “Easy Stitcheries for Little Fingers” column in the October 1926 issue of _Needlecraft Magazine_. The column contains the second of a series of lessons for young stitchers. Readers could purchase the patterns as hot-iron transfers for ten cents or stamped on toweling for thirty cents from_ Needlecraft_. Collection of _PieceWork_.

All ready for our second lesson, aren’t we, children? But let’s not say “lesson,” for that makes us think of school and hard study; it is just the greatest fun in the world to learn to make all sorts of pretty things for ourselves and those we love—isn’t it? So let’s say we are all ready for—oh, dear me! what shall I call it?—our next club-meeting; that’s it, because I am sure that by this time, in every neighborhood where the mothers take Needlecraft, as I am also sure all wise mothers do, the little girls have organized a “Busy-Bee Club”—which is a perfectly lovely thing to do, and simple. Because you do not have to have any officers or dues, or other things of the kind to be worried about, as the big folk do. All you need are Pricky-points and pretty colored threads, thimbles and scissors, and the stamped articles all ready for working.

We are going to make towels again today, but they are kitchen-towels, this time—or glass-towels, or dish-towels, just as you like to name them; anyway, they are pretty as well as useful; and if she does her work carefully and neatly, every small Busy Bee may be as proud of them as—well, as a peacock! The material is blue-and-white checked toweling, which doesn’t cost enough to worry over even if some of the stitches set by the littlest fingers are not quite even, and is light and easy for those same little fingers to handle.

The stitch we are learning to-day is called outline-stitch, because it really outlines the design. It can be used on many things; in fact, nearly every piece of embroidery has at least a few stitches in outline, so you see it is a very useful stitch, as well as quick and easy to do, once you have learned just how to do it, and practiced a little—which is true of other things beside stitches, you know. Figure A pictures it perfectly; study the diagram and follow the directions closely at first, and you will not have a bit of trouble: Come up through the material with Pricky-point at the beginning of the line to be covered and go down a short stitch ahead, up again at the end of the first stitch, down, as before, and so on all along the line, taking short stitches, keeping the line even, and with the thread always on the same side; that is, if you start to work with the thread thrown to the top, as shown, every stitch must be done in the same way; but if you find it easier to work with the thread thrown in the opposite direction, the result will be just as good if every stitch is the same. If you should get a bit careless, however, and turn the thread first one way, then the other, the line will not be smooth and even, as it should be; this is only a little warning, because I know you are going to look at the picture and do it just right. When using two or more strands of embroidery-thread, too, you must take care to keep them perfectly even, or so that one will not be tighter or looser than another.

Page from the January 1933 issue of _Needlecraft —The Home Arts Magazine_, with The Junior Needlecrafters column. Collection of _PieceWork_.

Nearly all the embroidery on these towels is done in outline-stitch, using a middle-sized Pricky-point, with two strands of blue thread to match the crossbars. Some of the very littlest Busy-Bee girlies may like to use the running- or darning-stitch with which we outlined the bunnies and the chickabiddies and the bowwows at our last club-meeting; and that will be all right until they become better acquainted with Pricky-points, and have learned just how to manage them. Then they will be ready for the real outline-stitch. Six strands of the thread and a big Pricky-point are used on the hems, which are made exactly like those you have already mastered, only this time it is long-and-short blanket-stitch: Turn and baste the hem neatly, just as directed; then bring Pricky-point out through the hem at the le¬ft-hand corner of the towel, and take a stitch just above the hem, keeping the thread always under Pricky-point, exactly as mother does when she makes a grownup buttonhole—because, as you know, blanket-stitch is nothing but buttonhole-stitch set a little apart. Take the next stitch a little higher, about one eighth inch above the hem and go on the same way, first a short stitch, then a long one, by turns, all the same distance from one another. When the checked toweling is used, it is easy to regulate your stitches by the bars across the goods. Figure B shows you just how long-and-short blanket-stitch is made, and it will be a splendid plan for you to learn to do it evenly and well because there is always lots of use for it in real embroidery. We will learn but one new stitch this time, because it will take quite a while to make a towel if you do your work well—as I know all Busy-Bee girls are sure to. They would not be at all like bees if they did not, for bees do perfect work. Long before now, however, I am certain bright eyes have discovered stitches that are not at all like outline-stitch in the designs we are copying, so I will tell you about them. The dots, such as holes in the salt- and pepper-shaker and the colander, are simply tiny over-and-over stitches, called seed-stitches; the posies, which make the cruet and bowl and glasses—which we will play are brimful of sherbet or ice cream, even though there is but one spoon to eat these goodies with!—so pretty, have petals in a stitch which our great-grandmothers called bird’s-eye-stitch; later it was named lazy-daisy stitch, because it is so quick and easy to make, and so especially suited to daisy-petals, long and narrow, and now a good many of us call it loop-stitch. We will learn all about this stitch later, and also about the French knots, one of which forms the center of each flower, and a half-dozen the decoration of the cruet-stopper.

By this time, I know my little workers are feeling quite big and grown-up over all the pretty things they have learned to do. There is nothing nicer than a set of clean cup-towels—still another name for them, you see—and mother, or the dear big sister who is filling a hope-chest, or auntie, will always appreciate such a gift.

At our next meeting, we shall have one of the most interesting and popular stitches, decorative and easy to do—you cannot help being pleased with it. But I must not tell you what it is, because some of you might be trying to do it beforehand, and that would spoil our good time. Just practice what you have learned, dear Busy Bees, and be all ready for our next meeting!