Buff knitting is a regional technique for knitting a shagged carpet-like fabric, specifically for work mittens.

Our adorable model showing her not-so-serious side while showcasing the buff mittens.

Buff knitting is a regional technique for knitting a shagged carpet-like fabric, specifically for work mittens. Worn primarily by teamsters and loggers, buff mittens were made and worn in the northeastern United States, specifically in the Adirondack Mountains and Maine. Loops of extra yarn are worked into the knit stitches and then later cut and matted, creating a thick, warm, and waterproof work mitten for the men whose hands were exposed to the cold North Country weather day in and day out.

In 1985, I met a regional knitting legend, but I didn’t know it yet. You see, my father grew up in the Adirondack Mountains of New York and married a farm girl from New Jersey, where he settled with his young family. Every year we took a trip “upstate” to visit his parents and explore his favorite places, including where he learned to drive, where he worked as a teenager, and the lakes, rivers, and mountains of his boyhood. But this particular year, I also got to visit one of my grandma’s favorite places—the yarn shop. I was nine years old at the time. On a day outing with my mother and my paternal grandmother, we traveled to Chestertown, New York, to what Grandma simply called “Annis’s.”

Annis Holmes opened her yarn shop in 1947 on the back porch of her home, and she stocked notions, patterns, yarn, and fabric. In addition to doing custom sewing and alterations, she also self-published tens of thousands of copies of her own knitting pattern booklets from 1969 until 1993. For me, the visit to her shop was one of many childhood memories with my grandma, who was a talented needleworker: she made crocheted blankets, quilts, knitted socks, flannel nightgowns, handbags, and winter sets for her grandchildren and great-grandchildren. It wasn’t until 2011, on a cross-country visit back home to that New Jersey farm, that I learned Annis was a legend.

My mother and sister and I were enjoying a rare quiet afternoon together when the topic of buff mittens came up. Mom dug up an Adirondack Life magazine article about buff knitting and showed me some of Annis’s old self-published pattern booklets. As a new self-publishing knitting book writer, I was immediately fascinated by this remarkable woman’s life and how she single-handedly preserved a regional knitting tradition. 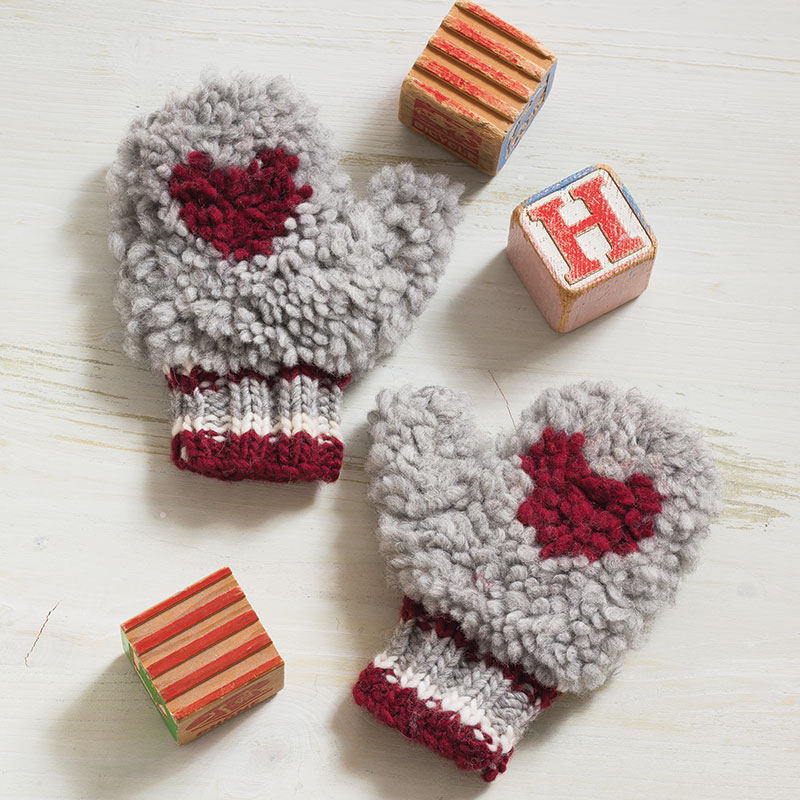 Make these charming mittens for your cherished toddler. Photos by Joe Coca.

For Annis, who worked as a cook in a logging camp as a newlywed, making buff mittens was a normal everyday domestic task and part of surviving the cold temperatures of winter camp. It wasn’t until the 1980s and 1990s that she learned that local knitters were interested in reviving this regional technique, and she proceeded to publish her final book, Buff Knitting for the Family.

The technique Annis developed at this point in her life interestingly enough exploited the qualities of acrylic rather than wool yarn and consisted of a unique locked stitch that kept the loops in place. The original technique, which had drawn upon the qualities of “buff” or “naked” wool, namely the memory and “stickiness” of raw wool, would not work with a man-made fiber yarn. To create the “buff” look with acrylic yarn, Annis had to invent a whole new technique. For her efforts in keeping the buff knitting tradition alive, she was honored as a North Country Legend and received a Traditional Arts in Upstate New York Heritage Award.

Annis passed away in 2011. I never had a chance to talk to her about buff knitting. Although I have spent countless hours fiddling with the buff stitch and trying her techniques with acrylic yarn, I prefer wool. So I have reworked an interpretation of the buff stitch, using wool yarn and also creating the stitch with a single strand of working yarn, rather than with two different working yarns, as Annis’s acrylic technique necessitated. I trust that she won’t mind my using a simple loop-stitch technique and that she would have liked to know that as stitchers, we like both to preserve tradition and invent the new—as she did.

To make Joanna Johnson’s charming “Heart in Hand Buff Mittens for a Child,” pick up a copy of PieceWork’s January/February 2016 issue.