Modes of dress are constantly changing, even those that are apparently cemented in tradition.

Whether it's leading-edge fashion on the street or antique costumes in a museum, clothing is one of the richest sources of inspiration for new interpretations of design and innovative applications of technique. Choice of materials, construction features, colors, and other clothing details may reflect numerous aspects of a culture, from class or clan structure and religious symbolism to manufacturing methods and an individual’s wealth. Clothing also provides rich detail about a particular time period. (Costume designers for stage and screen use this information to provide a chronologically accurate context to the plot: What would a movie set in the Victorian era be without bustles and corseted waists or a 1940s film without padded shoulders and seamed stockings?) As a weaver, seamstress, and the owner of Folkwear, a sewing pattern company, I find costume and fashion endlessly fascinating on many levels, not the least of which is that they are refreshingly different from my own “indigenous” costume of jeans, turtleneck, and fleece vest. 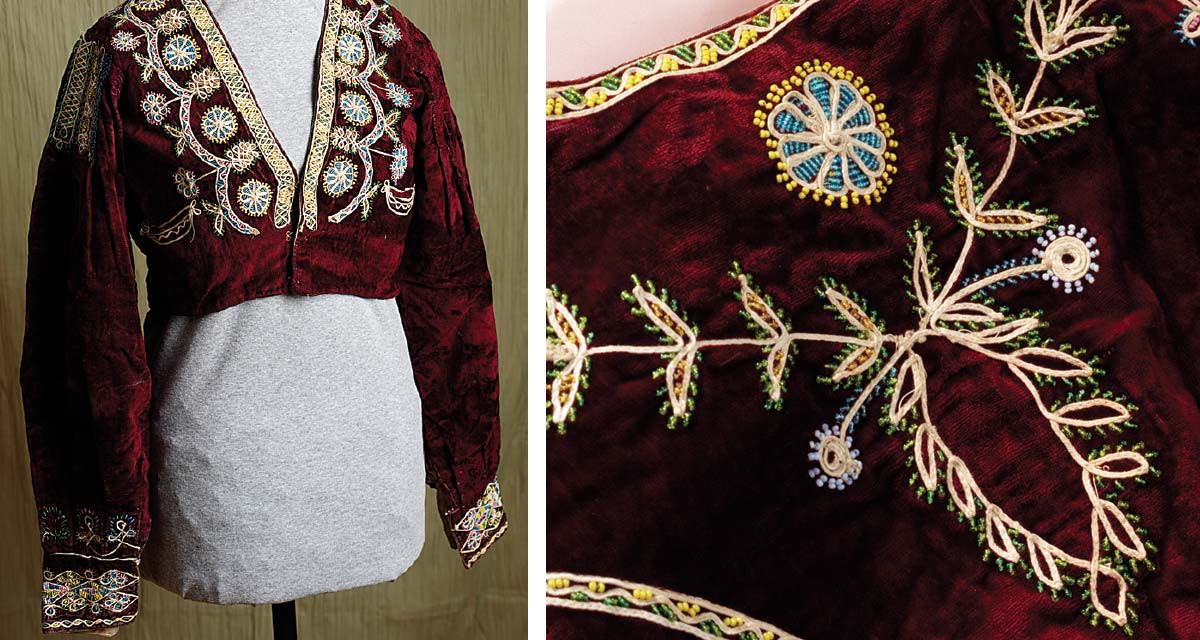 Woman’s chaquetilla (jacket). Maker(s) unknown. Bolivia. Date unknown; purchased in the 1970s. Collection of Folkwear. The original of Folkwear pattern #124 Bolivian Milkmaid’s Jacket, it comes from the Bolivian altiplano (high plateau); similar jackets are still worn by Chola (members of the merchant class) and Aymara Indian women. The style can be traced to the uniforms of Spanish conquistadors, who ruthlessly dominated Bolivia during the sixteenth century. Historic garments such as this one typically are made of jewel-tone velvet, lined in cotton muslin, and elaborately decorated with intricate beading and narrow handworked braid. Today, the chaquetilla is worn with many layers of full skirts in bright colors; Chola women top off the outfit with a bowler hat.

Costume, however, is much more than just a static indicator of a time or place. Modes of dress are constantly changing, even those that are apparently cemented in tradition. As with any other aspect of a culture, wardrobes absorb outside influences, assimilate new ideas, react against established conventions, and express individuality. Over time, they incorporate new materials and styles even while preserving deeply held customs.

Such changes in fashion and costume typically evolve very slowly as production methods change, populations move, or societies develop. During periods of great unrest, however, dramatic changes can rapidly affect a society’s government, social structure, religious customs, and even its indigenous costume. Conquering armies leave new materials and dress codes in their wake. Great migrations of people take their favorite clothing along with them and pick up new outfits along the way as needed. Conquered peoples assimilate components of the dominant culture in religion, art, and everyday dress.

Widespread social unrest typically elicits both a staunch clinging to traditional ways and a rebellion against them. In the face of challenges from foreign newcomers or changing times, many people hold fast to their traditions and work hard to make sure that they are passed to succeeding generations. But costume also may be used to defy tradition, and social dissenters often develop an identifiable “look” that symbolizes their rebellious nonconformity. (Ironically, this style of dress quickly becomes just as conformist as the customary attire that its wearers are protesting.) 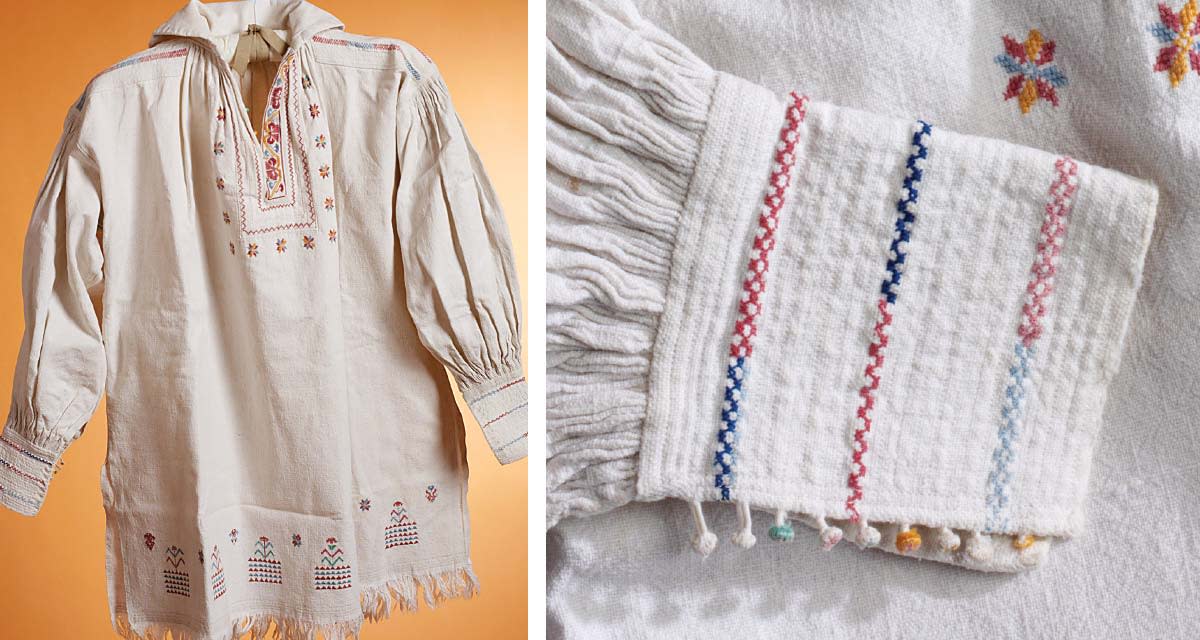 Man’s shirt. Maker(s) unknown. Europe. Date unknown; purchased in the 1970s. Collection of Folkwear. The traditional workingman’s shirt of eighteenth-century Europe found its way into the wardrobe of American frontiersmen—fur traders and river men in particular. Made up in coarse handwoven linen or cotton, the shirts were hardworking and durable. The delicate cross-stitch embroidery, needle-lace work around the neck opening, and tiny handworked multicolored covered buttons on this rarely worn example exhibit an exquisite attention to detail by its anonymous maker. Folkwear’s pattern #204 Missouri River Boatman’s Shirt was modeled after this original.

The 1960s was a tumultuous period, with its civil and women’s rights movements and mass protests against the war in Vietnam and “the establishment.” Young people especially denounced conventional practices in lifestyle, music, fashion, education, travel, and more. Garments of the 1960s featured simple silhouettes and unfitted dress styles such as the A-line and chemise, all made in new easycare synthetic fabrics with little embellishment. In turning against what they saw as featureless robotic uniforms, America’s hippies and England’s mods sought new ideas for interesting clothing that would set them apart from mainstream fashion and express their individuality. Vintage apparel in thrift shops and ethnic wear offered for sale in the import shops in college towns provided some inspiration while exotic fabrics, sumptuous embroideries, and riotous color combinations of indigenous garments found during their own world travels provided more. Both the clothes themselves and the ideas gleaned from them contributed to the development of “radical” new styles that challenged the norms of acceptable appearance.

At first, hippie dress was ridiculed, but by the mid-1970s, the new styles had gained wider acceptance and were no longer considered radical. By the end of the decade, they had been co-opted by haute couture and mainstream fashion designers, and before long, they had become dated, only to be resurrected a generation later by young seekers of a “different” look. 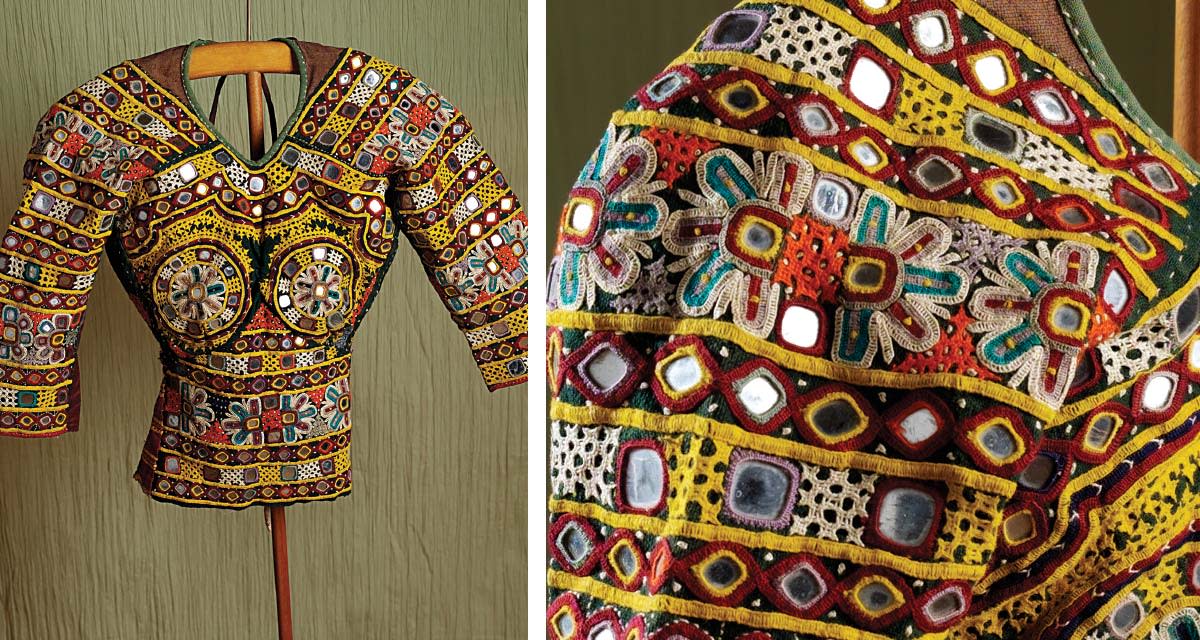 Woman’s backless bodice (choli). Maker(s) unknown. Kutch, Gujarat, India. Date unknown; purchased in the 1970s. Collection of Folkwear. Imagine how this backless bodice must have excited young women of the 1970s who were looking for alternatives to mainstream America’s beige A-line shifts and white blouses with Peter Pan collars. The tight-fitting, backless garment was cool in the desert region of Kutch; there, however, it always was worn with a lightweight veil covering the back for modesty. This example, with its modest midriff-covering panel, may reflect the Muslim influence of nearby Pakistan; elsewhere in India, the bodice would be shorter and more bralike. Its plain-woven cotton fabric is heavily embellished with shisha mirrors, open chain-stitch embroidery, and lacy woven threadwork. Garments like this one are often part of a dowry, made by women in the bride’s family, that includes clothing for both bride and groom, jewelry, and household goods.

The founders of Folkwear were among those fashion pioneers of the early 1970s who collected, studied, and wore vintage and ethnic clothing. They used many of the pieces that they brought back from their own travels to draft the company’s patterns; others provided rich sources of ideas for embellishment techniques. Two of the garments shown here served as models for patterns (#124 Bolivian Milkmaid Jacket and #204 Missouri River Boatman’s Shirt). The third garment, a choli (bodice) from the Kutch region of northwest India, provided detailed information on chain-stitch embroidery and the use of shisha mirrors that was used in other Folkwear patterns.

These garments, together with others in the Folkwear costume collection, continue to provide information about textile traditions of other cultures, inspiration for new patterns, and motivation for us to keep working on our own creative pursuits. They are, indeed, inspiration and artifact.

Kate Mathews, the former owner of Folkwear, is a former editor of Fiberarts magazine and the author of numerous books on sewing. She lives near Asheville, North Carolina, and dreams about spending more time in her own textile studio.

This article was published in the May/June 2007 issue of PieceWork.