Wandering through a collectables shop in Skopje, North Macedonia, Ali Giles-Damjanovska discovered a boxed set of hand-painted posters of Macedonian folk costumes, published by the Ethnological Museum in 1963.

“Poster XLV caught my eye,” she explains, “especially the design motif on the cuff of the man’s false sleeve . . . The drawing depicts a man’s costume from the mountainous village of Staravina, in the south-central region of today’s North Macedonia. The sleevelets are knitted in a black-and-white geometric pattern that mimics the black relief embroidery stitched onto men’s and women’s sleeveless vests.” Ali bought that poster and credits the illustration as the inspiration for her Colorwork Sleeves project, companion to her article about Macedonian wedding aprons in our Fall 2022 issue. 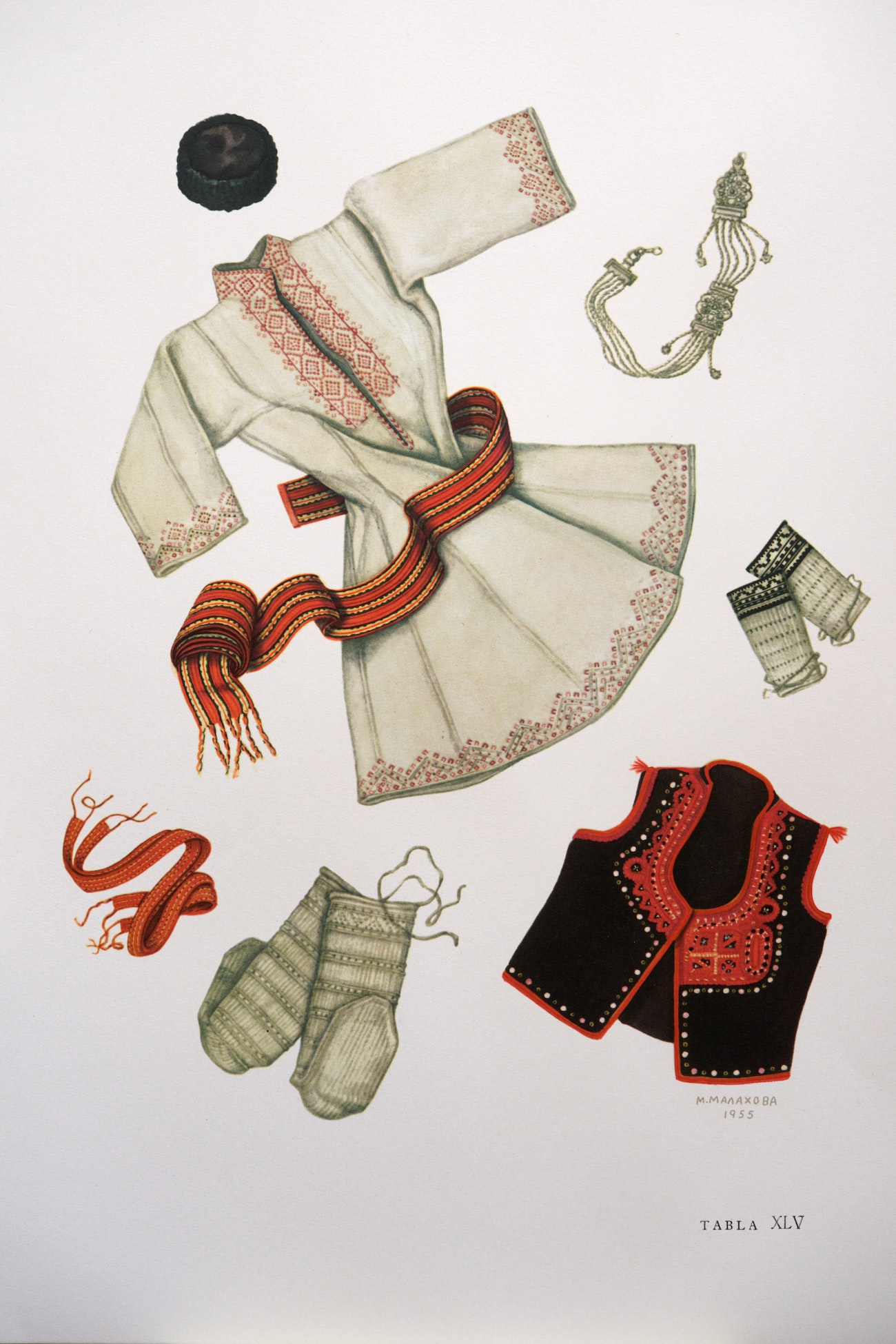 Men’s outfit from the village of Staravina on a poster from The National Dress of Macedonia, The Ethnological Museum (1963) Illustrations ©M.Malaxova. Photo courtesy of Alison Giles-Damjanovska

In 1963, the Ethnological Museum in then Skopje, Yugoslavia, published what has become an icon in the study of ethnic textiles of the region: The National Dresses of Macedonia, edited and with interpretive text by Vera Klic̆kova, director of the Ethnological Museum, and watercolor illustrations by Marija Malahova and Olga Benson. The boxed set of posters Ali discovered were prints of the illustrations for the book. It features 61 color illustrations in total, including eight bridal costumes and five men’s costumes together with all their accessories, arranged in 46 plates. In 15 separate supplements are details of the individual garments for each costume.

Trying to learn more about the publisher of The National Dresses of Macedonia, we contacted former senior curator for textiles in the ethnology department of the Museum of Macedonia Jasemin Nazim. She explained that in the 1970s the Ethnology Museum merged with the Historical Museum and the Archaeological Museum, into a single a national institution, honoring the culture of the Macedonian people. This new Museum of Macedonia formally opened in 1976 in Skopje, which is now in the republic of North Macedonia. Its ethnology department houses a significant collection of regional textiles. 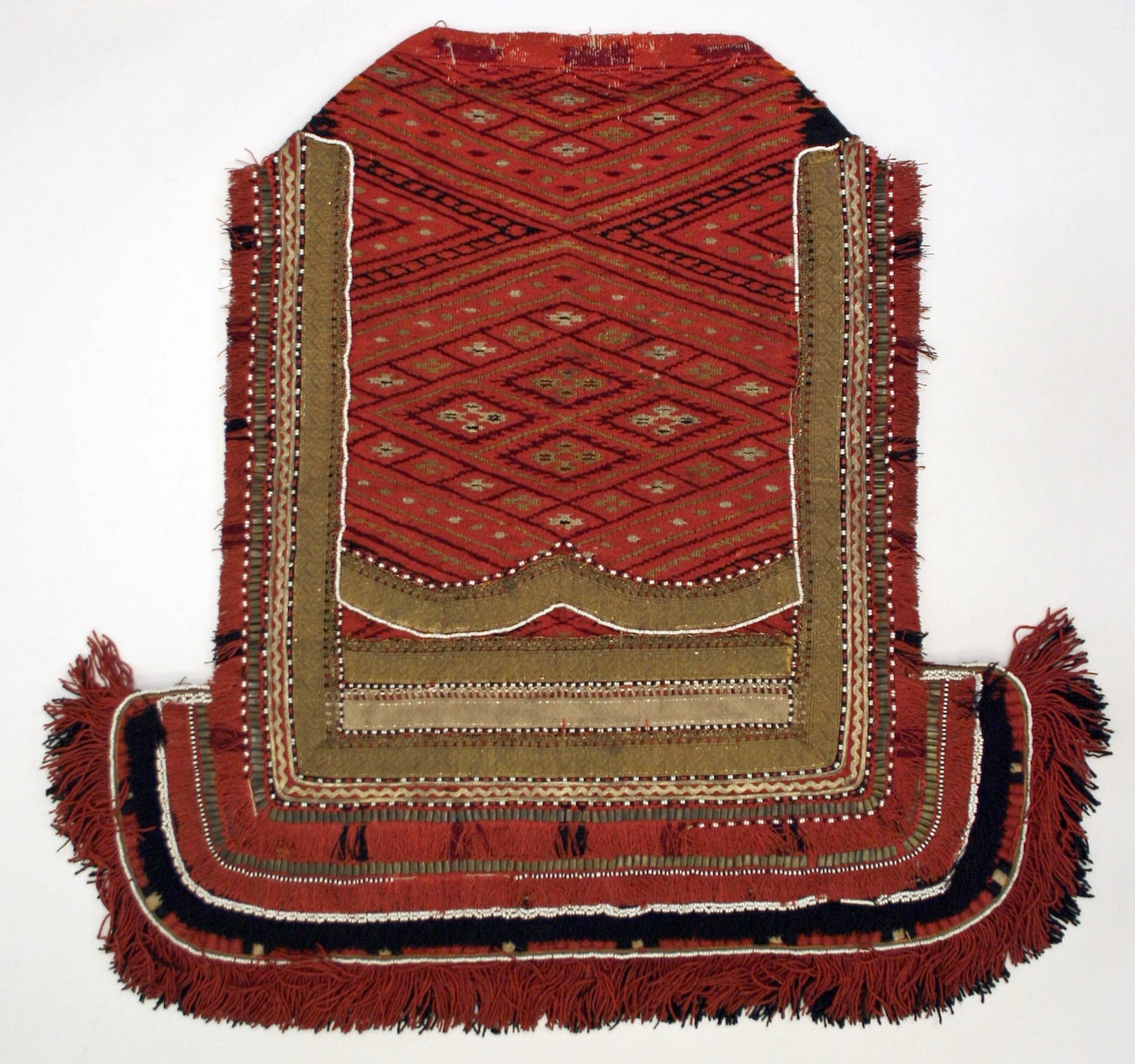 Olga Benson was a refugee from the Russian civil war who immigrated to Skopje in 1920. She quickly gained great acclaim for her watercolor paintings of traditional Macedonian dress. Two decades later, she moved to Belgrade where she worked at the Institute of Ethnography at the Serbian Academy of Sciences and Art as a folklore painter until 1950 when she immigrated to the United States. You can view more than two dozen of her paintings through the University of Washington Libraries digital collection.

Our Fall issue explores the theme of migration—of people, objects, and ideas. When we set out to learn more about Ali’s poster, we never imagined the traveling thread we’d follow across redrawn political borders and merging museums or about the gifted artist who honored the national dress of a tradition not her own while she rebuilt her life. Through all the changes, what survives are the textiles, safely conserved in hand-painted detail.

Karen Brock is a contributing editor of PieceWork magazine.