The history of knitting has been shrouded in mystery, half-truths, and outright lies! Is this because there is so little material, either textiles or documentation, to enable that history to be fully written?

The Mary Allen gloves knitted by Sue Leighton-White. Mary Allen (1857–1924), a resident of Dent, Yorkshire, England, supported herself and her son with her exquisite knitting. Several pairs of her gloves, including the ones that inspired Sue Leighton-White, are preserved in two English museums. Photograph by Joe Coca.

In the absence of verifiable information, writers and historians have speculated, guessed, and sometimes even made up things. The trouble is twofold: First, much of the available information is inaccurate and misleading. Second, some of it is also beguiling, with wonderful stories that sometimes involve the Bible, shipwrecks, and faraway places. Everyone loves a good story, so these fictions about knitting—what it was used for and how it spread from one part of the world to another—have become embedded in “fact.”

More recent research, usually as part of archaeological investigations, has used scientific methods and careful analysis to establish the age of found scraps of knitted fabric. However, there are still gaps in our knowledge. One reason is that a fabric looking exactly like knitting can be produced in various ways, and fragments are difficult to identify with certainty. Often, knitted items were worn out, especially mittens, hats, and socks and stockings. However, gloves, more difficult to construct and sometimes of a higher status than everyday items, have survived, albeit not in large numbers. Still, the survivors help us piece together a chronology, if not a history.

This exploration of knitting history looks at handknitted gloves, mostly those knitted in two or more colors. Examples have appeared at intervals during the centuries because knitting emerged as a way of constructing textiles. Although the journey is one broken in time and often based on single items, it will take us back through centuries and across Europe from England and Scotland to the Scandinavian and Baltic countries. We begin in the present day where handknitted gloves are plentiful, especially in northern Europe. Although many knitters follow the traditions of their respective countries and reflect patterns and constructions that have been used for many years, others also may use different techniques that generate new traditions.

Estonia has some of the finest knitting in the world, and Estonian gloves are no exception. Two-color stranded knitting is mixed with braids, chains, and other constructions to create rich patterns around cuffs, while other techniques such as inlay display geometric patterns on hands and fingers.

Latvian gloves, although less well-known than the mittens for which Latvia is famous, are impressive. Latvian knitters incorporate wonderful beadwork in original cuffs that use a wide variety of techniques and color combinations for special effects.

Scandinavian gloves are distinct, often featuring the eight-pointed star or reindeer in contrasting natural-colored yarns. A glove in the United Kingdom’s Knitting & Crochet Guild collection known to be from Norway is almost identical to gloves in my personal collection that I know were knitted in Shetland. 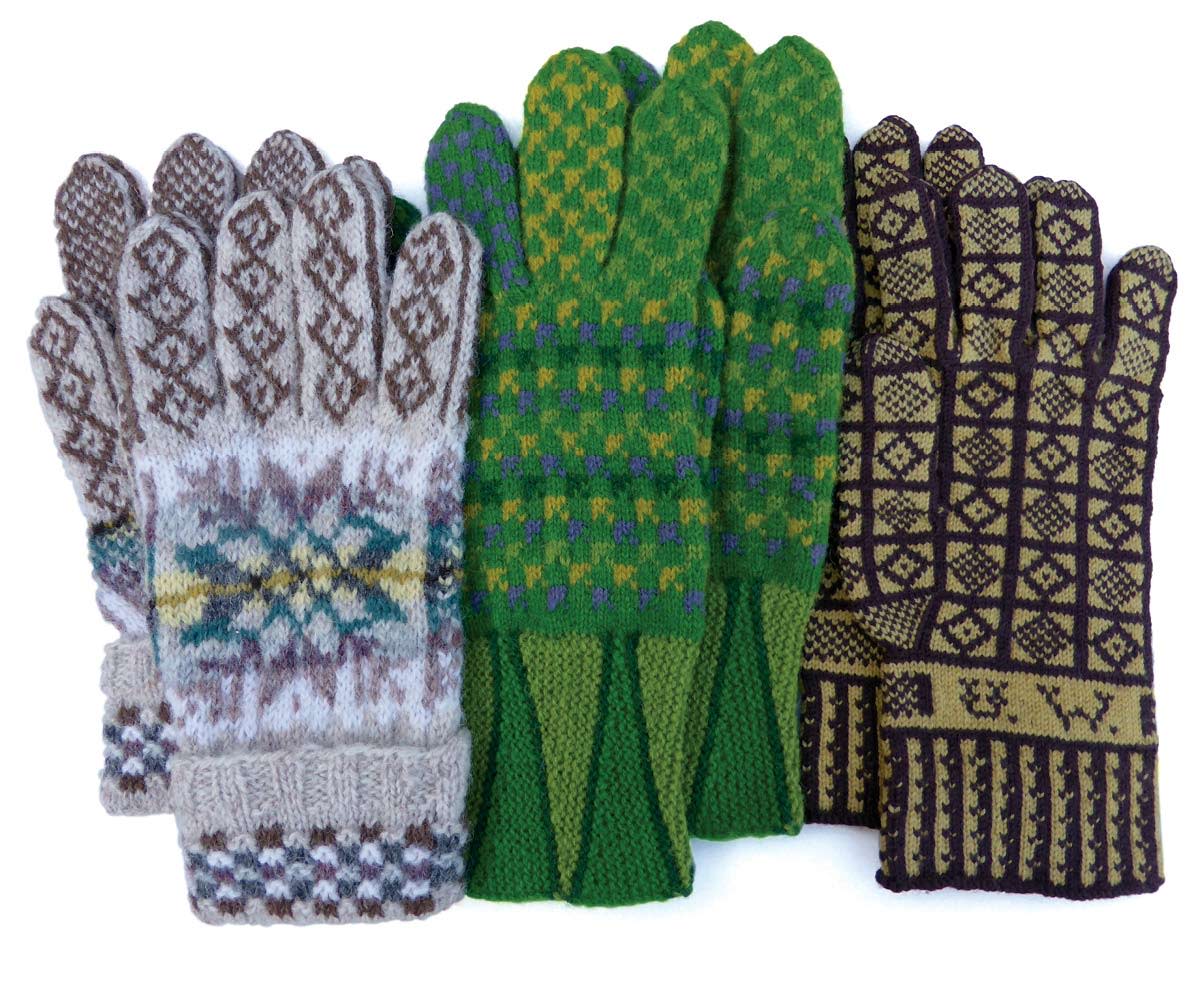 In the United Kingdom, the hunt for colored gloves takes us to Sanquhar, Scotland, where the intricately patterned gloves that take the name of the town are still knitted. Knitted in two contrasting colors, these gloves characteristically have the owner’s initials around the cuff and hands in small geometric patterns, the most popular of which is the Duke pattern based on a grid named after the Duke of Buccleuch, who supported the industry. Patterns and yarns suitable for knitting these gloves are available in the town, and one can order a pair of gloves with customized initials. The Sanquhar Tolbooth Museum has a display of gloves and information about their history.

Just over 100 miles (160.9 km) to the south, similar gloves were knitted in the tiny Yorkshire village of Dent. Mary Allen (1857–1924), a Dent resident, is known to have knitted them, and several pairs that she knitted are now housed in the Dales Countryside Museum in the small town of Hawes, Yorkshire, and in the Wordsworth Museum in the English Lake District. As well as Mary Allen’s knitting, the Wordsworth Museum houses a brown-and-cream wool pair of gloves with the name “G. Walton” and the date “1846” knitted in.

Traveling south to the Midlands city of Leicester, gloves knitted for former Prime Minister Lord Charles Howick (1764–1845) are in the collection of the New Walk Museum. They have knitted patterns quite similar to those found on Victorian embroidered samplers in pastel colors on a white background. “Lord Howick M.P.” and the date “1833” are knitted in around the cuffs. Nothing else seems to be known about them.

We now go over the North Sea to Friesland, the Netherlands, where the Fries Museum in Leeuwarden has a glove dating from 1783. Knitted in two colors of natural wool, the glove has a cuff that consists of many strands of yarn gathered to form a large ridge around the cuff. The construction is complex, with a shaped thumb gusset and an allover pattern of alternate stitches. Again, initials, presumably of the owner, and a date are knitted in. It seems likely that the custom of knitting in initials, most often of the owner, was, and still is, a mark of the owner’s status. Obviously, initials let the owner keep track of what would have been a valuable and useful item.

Contemporary with this wool glove, the rich and fashionable were wearing knitted silk gloves closely related to the silk ones that had been worn by high-ranking members of the clergy for perhaps two centuries. At the Fashion Museum in Bath, England, there are two pairs similar in colors, fineness of manufacture, and construction, but one is a liturgical (church) glove while the other comes with a fashion pedigree. These gloves have finely shaped thumb gussets, and both use a similar range of colors in fine silk. On a cream background, light brown, pale pink, and light green are knitted into complex branching patterns. Both are said to date from the late seventeenth or early eighteenth century.

Gloves found with the remains of Gunnister Man in Shetland were a similar shape and style to those knitted for the aristocracy and high-ranking clergy but in rather less sumptuous materials. Thought to date from about 1700, the Gunnister gloves have the asymmetrically shaped gauntlet found in many gloves of that time. The gloves are in one color of yarn, a brown wool, with textured patterns knitted into the structure. However, a small purse in the same find had some decoration in the form of two-color knitting, similar to that found around the cuff of a pair of child’s mittens now in the Museum of London. Gunnister Man’s clothes lasted because they were immersed in the peat bog, but his body was mostly dissolved. According to the reports of the dig, his fingernails were discovered in the gloves. 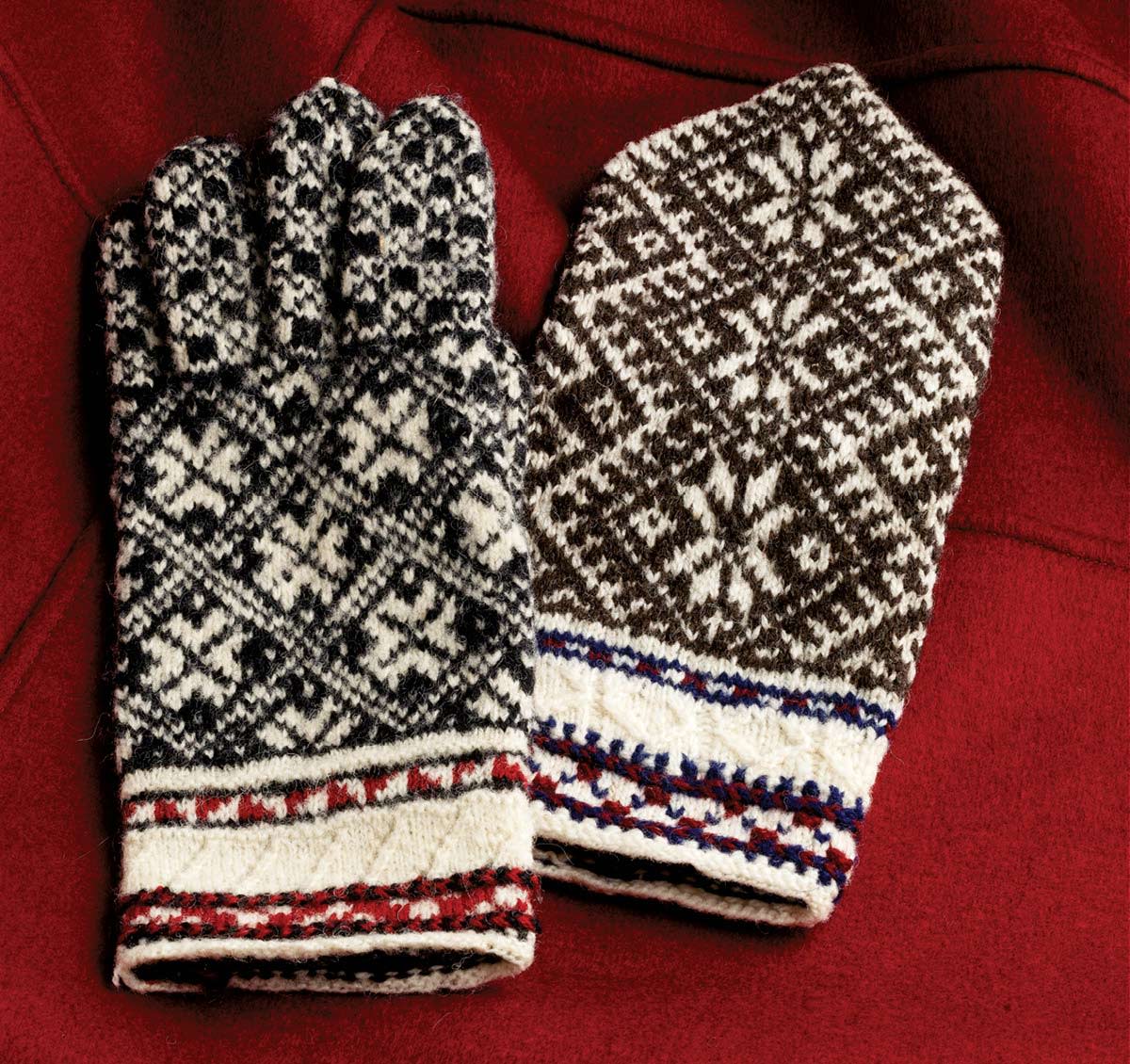 Another silk glove preserved in a similar way was found in the remains of a shipwreck in 1565, the result of a battle between the Swedes and the Danes in which many people died, including the glove’s owner—Sten Svantesson Sture (circa 1540–1565). He had attached the glove to his black felt hat as a token of his loyalty to Princess Sofia of Sweden (1547–1611), who knitted her name “Frevchen [Miss] Sofia” in the palm. Having that information is unusual because more often the owner’s rather than the maker’s name is knitted in. Although the glove has colorwork patterns and is knitted in silk, the thumb construction is fairly basic—a “peasant” thumb constructed without a gusset from a line of horizontal stitches, most likely picked up after the glove was completed.

Liturgical gloves were part of the ceremonial clothes bishops wore for services. These gloves have survived because of their wearers’ status and also because they weren’t subjected to heavy wear. (In contrast, wool gloves made by or for poorer or lower-class people were used until they wore out.) These fine silk gloves are fascinating for several reasons, not least because they are stunning items of workmanship that would be almost impossible to replicate today. The use of silk yarns and gold or silver threads, along with embroidery and sometimes lace decoration and metallic ornamentation, make these gloves astonishing examples of the makers’ art. To see these gloves is to be awed by the skill that was invested in all aspects of their manufacture. 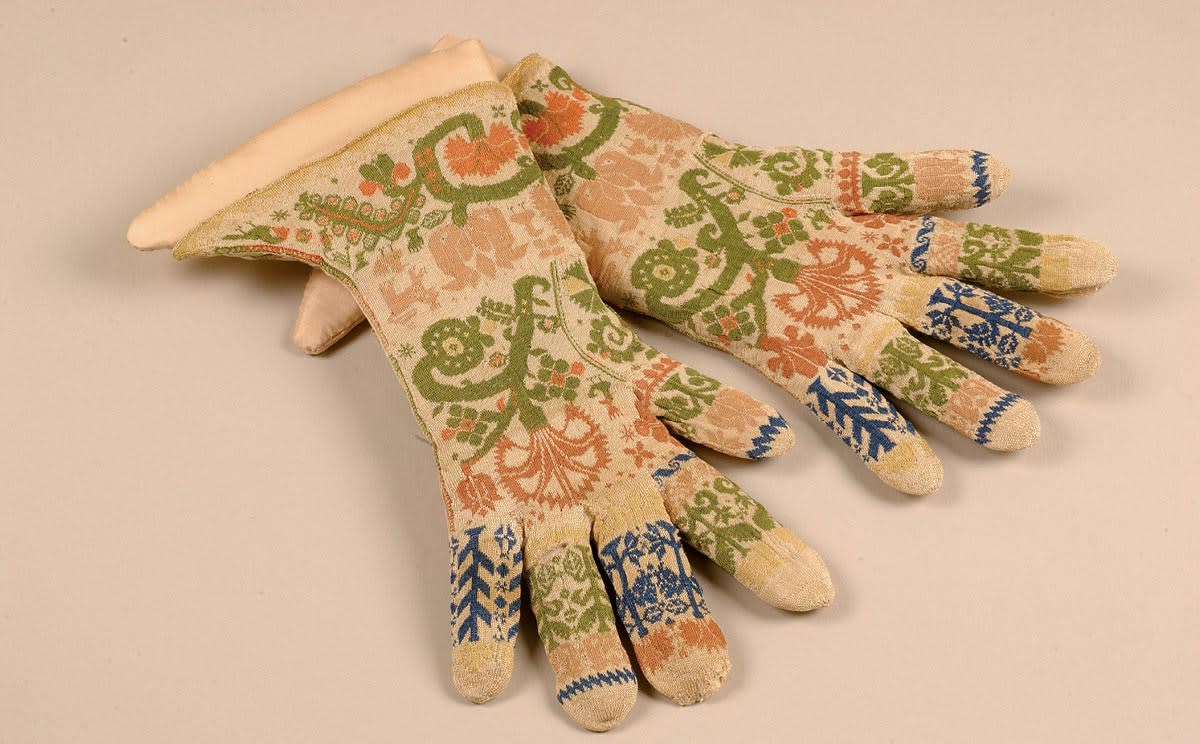 The development of this fine knitting depended on the availability of fine yarn and suitably smooth needles, and it is thought that these innovations most likely came to Europe with the Arabic invasion of Spain. Knitting itself, though, did not develop for some centuries after that. The earliest examples of liturgical gloves, which were worn by important members of the Christian clergy from the seventh century onward, were actually constructed using the single-needle method that is most often called nålbinding. (The fabric can look exactly like a knitted piece produced with needles.) However, from about the thirteenth century, liturgical gloves have been shown to be knitted. The surviving pairs are often red silk with metallic gold or silver thread in the decoration, sometimes embroidered or made from lace, but often also including stranded knitting. Most have a distinct gauntlet and a shaped cuff, and many are lined with silk. Sources are contradictory about who made these gloves, but it is most likely that they were made in specialist workshops in either Spain or Italy, where they may or may not have been knitted by nuns.

Liturgical gloves surviving into the twenty-first century are mostly found in museums and collections, but they can also be found in cathedrals and churches, where they are kept as relics of bishops or saints. As collections are increasingly available digitally, we can also see many of these wonders online (see the Digital Resources sidebar). A major group of liturgical gloves is held by the Worshipful Company of Glovers, one of the ancient livery companies based in London, whose entire collection of both liturgical and secular gloves is online. (The physical collection—The Glover Collection Trust—is housed at the Fashion Museum in Bath.)

So our journey comes to a close with some of the most sumptuous gloves ever made having survived for us to marvel at. It’s worth remembering though that many ordinary domestically knitted gloves and mittens, socks, and stockings were probably knitted at the same time but have been lost. The history of knitting is a broken one with many gaps. Looking down the centuries at this selection of gloves may enable us to get a sense of the techniques that link one era with another and link us with the makers of long ago. 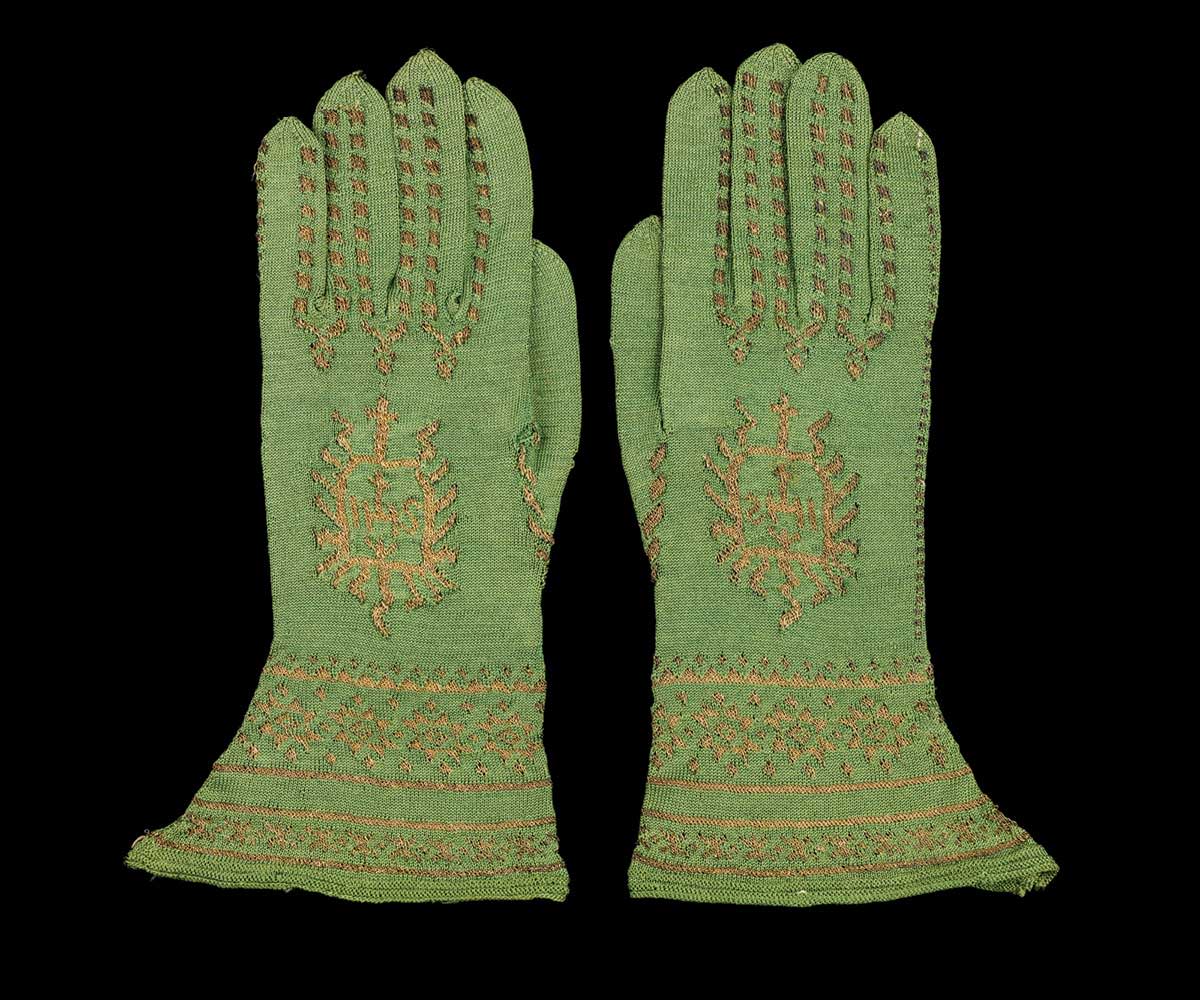 ———. “The Symbolism of Gloves.” PieceWork, May/June 2000 (with additional information on the Sten Svantesson Sture glove).

Strawn, Susan. “A Child’s Mitten from Sixteenth-Century London.” PieceWork, January/February 2010 (with additional information on the child’s mittens now in the Museum of London).

Thomas, Angharad. “By the Dexterous Use of Two Threads: Gloves and the Handknitting Industry of Sanquhar, Scotland.” PieceWork’s Knitting Traditions, Spring 2014.

Dr. Angharad Thomas is a researcher, designer, and knitter, especially of gloves, from ancient to modern. Originally a geographer, her career has included teaching, designing, and lecturing. Knitwear design has taken her to Europe, North America, Japan, Australia, and India. She is a volunteer curator at the collection of the United Kingdom’s Knitting & Crochet Guild. When not knitting or curating, she hikes, gardens, and plays the accordion. Her (occasional) blog is at www.knittinggloves.wordpress.com.