It was during the Great Famine (1845–1849) that women, through their artistic and delicate hands, created the singular craft of Clones lace.

The tradition of Clones Irish crochet lace evolved from the human disaster of the Great Famine (1845–1849), the pivotal social event of nineteenth-century Ireland, when more than a million people died of hunger and disease while millions more emigrated to the four corners of the world. It was in these desperate and demoralizing times that women, through their artistic and delicate hands, created the singular craft of Clones lace. Their creativity made them the main wage earners of their families in the Cavan/Monaghan/Fermanagh area, delivering generations that followed from the clutches of hunger and famine and helping to realize the dream of a better life for both themselves and their families. Indeed, many of them were able to use their crochet skills to earn the price of a ticket to the New World.

In 1987, I came to Clones as a young woman and met Mamo McDonald, a vibrant personality in the town, who introduced me to the beautiful heritage lace of the area and told me how the lace industry had saved thousands of local families during the famine. I was hooked. Although I began my research into Clones lace in 1987, it wasn’t until after the birth of my eldest daughter, Máiréad, in 1989 that I began crocheting it. About the same time, we, a group of fifteen local people emulating the old way in which Clones lace was made, formed the Clones Lace Guild, a workers’ cooperative. 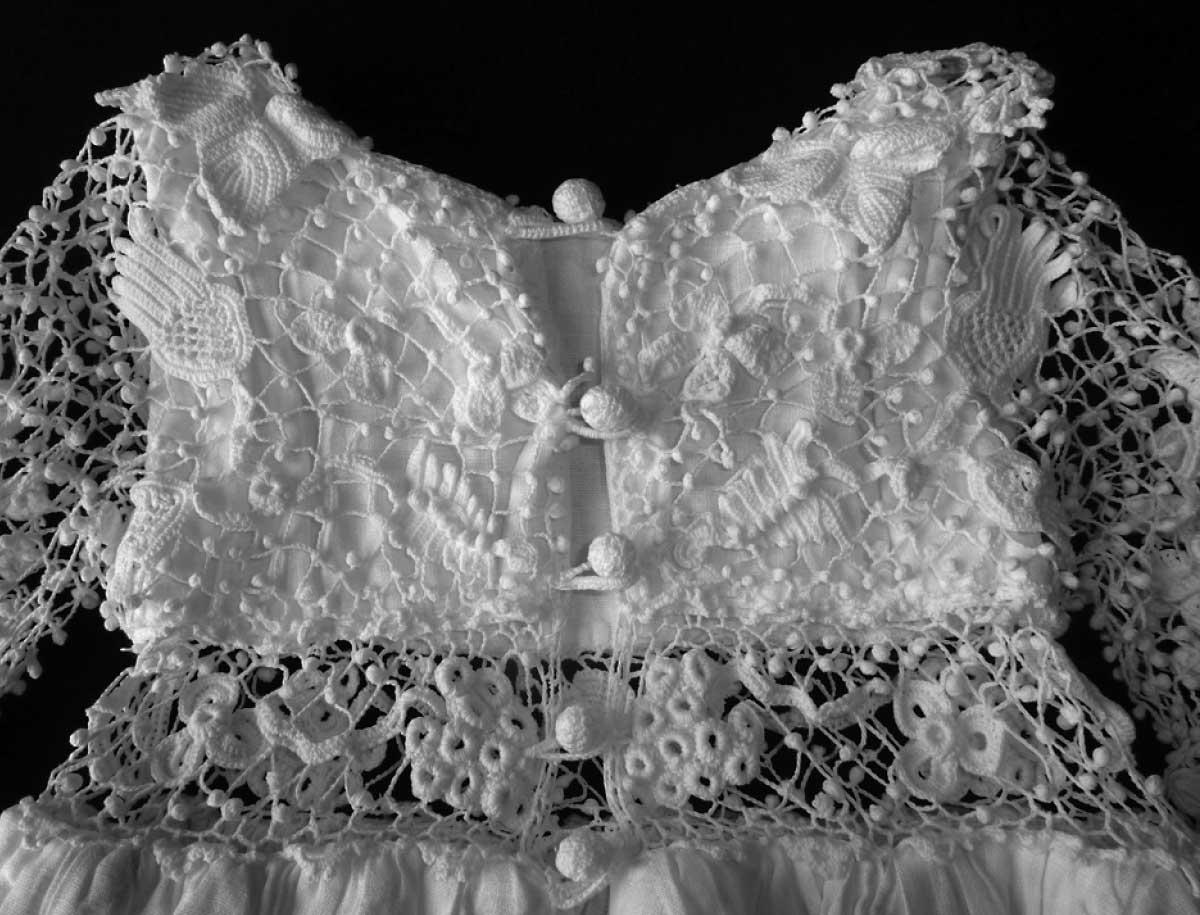 The back of Máire Treanor’s family christening robe, showing the lace buttons.

A year later, and aware that the people who made Clones lace in the past had no heirloom pieces in their own families, I decided to make a linen christening robe with inserts of Clones lace for my growing family. In 1990, I was the proud mother of a second daughter, Aine, who wore the christening robe and a Clones lace christening bonnet that I also had designed and crocheted for her.

The following summer, I added 2 inches (5.1 cm) of Clones lace around the bottom of the skirt of the christening robe, and my godson, Seán, wore it. In April 1992, my third daughter, Cáit, wore it. I had by then added lace to the bodice and sleeves and a lace inset down the middle of the dress. In the traditional fashion, I had hand-rolled the edges of the linen and attached the lace to it with crocheted slip and chain stitches.

In 1993, the guild received funds from the International Fund for Ireland to employ a marketing specialist. Cynthia Stewart fell in love with my christening robe and bonnet and thought she could market them in the United States. She asked me if she could take them to the States as a sample and asked me how much I would charge to make replicas. Remembering the hard work ahead of me if I got any orders, I exclaimed, “I couldn’t make them again. It took me three babies and three years’ hard work!”

Cynthia eventually left for the States with my robe and bonnet along with other robes, bonnets, and booties with simpler designs. She left my outfit as a sample with an exhibitor at a trade show while she went off to attend another show. On her return, however, she discovered that the exhibitor had sold them to a retailer in another state. 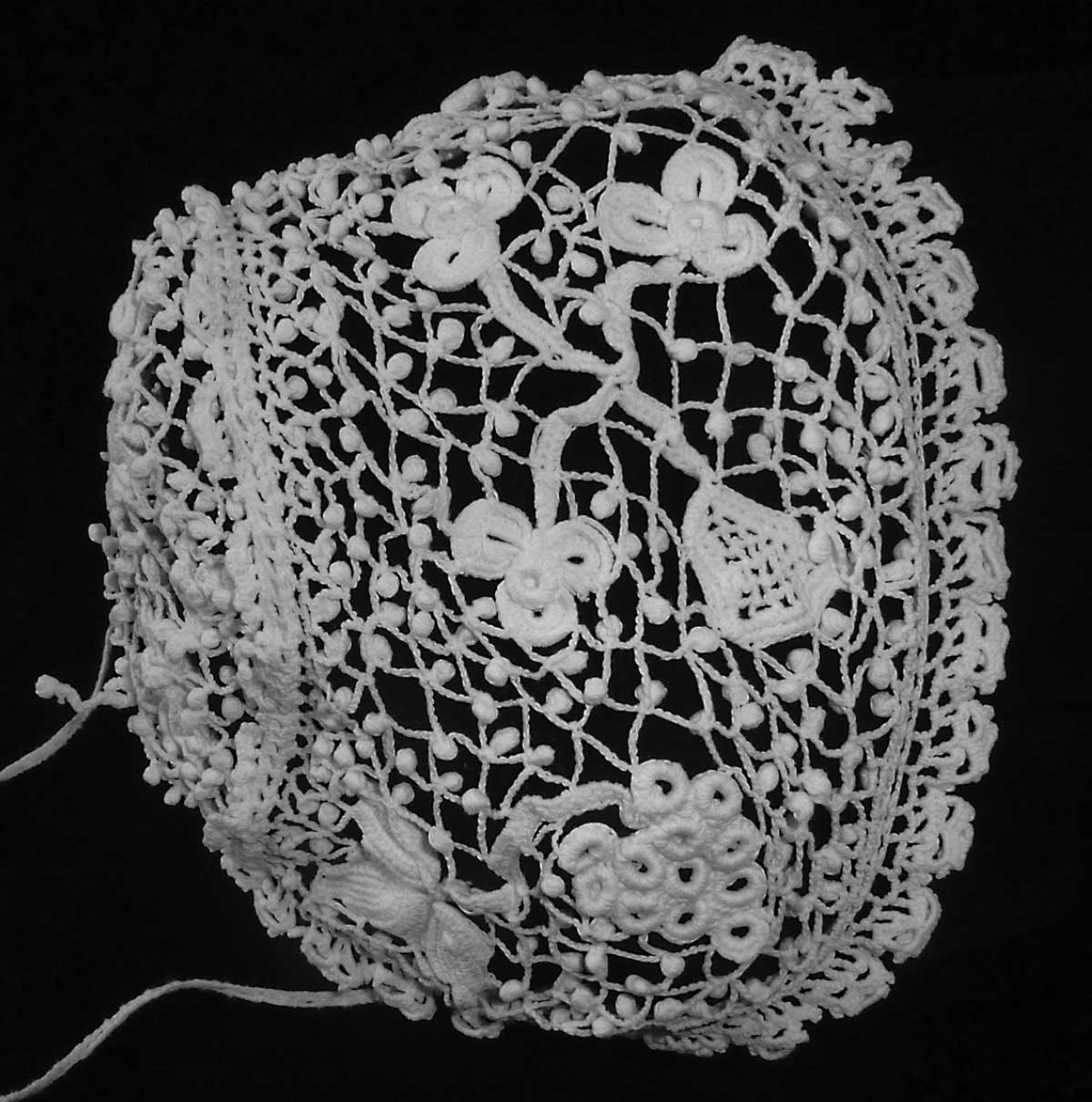 I was devastated. The robe and bonnet had taken so long to make, and I couldn’t imagine being able to replace them. After six months of nearly constant telephone calls and letters (this was before the Internet), they were returned, and I haven’t let them out of my sight since.

After this incident, I decided to embroider the names and dates of the babies who wore the christening robe on the underskirt, both to add richness and history to the robe and so that it could never be sold as new. So far, ten babies in my family have worn the robe and bonnet on their special day, as have the children of several friends in Clones.

Máire Treanor was born and educated in Armagh, Ireland. She came to Clones in 1987 and fell in love with the story of its lace. As a modern missionary for Clones lace, she has taught the technique in various parts of Ireland, in Brittany, and in many cities in the United States. She enjoys researching the history of Irish crochet, creating new pieces, developing the craft as an art form, and passing it on to a new generation. She is a member of a lacemaking group, the Clones Lacemakers, who make commission orders for Clones lace. Máire is the author of Clones Lace: The Story and Patterns of an Irish Crochet (Berkeley, California: Lacis, 2010) and a DVD produced by Interweave in 2012, Irish Crochet and Clones Lace.

This article was originally published in the May/June 2014 issue of PieceWork.