Celebrating 25 Years of PieceWork: Of the Maker's Self a Part

As PieceWork celebrates twenty-five years, let’s take a look back at the beginning. When Veronica Patterson wrote her editorial letter for the first issue, March/April 1993, she set the tone of the magazine for years to come.

As PieceWork celebrates twenty-five years, let’s take a look back at the beginning. When Veronica Patterson wrote her editorial letter for the first issue, March/April 1993, she set the tone of the magazine for years to come. Here is Veronica’s memorable editorial letter in its entirety.

When we see raised motifs in a piece of crocheted lace, elaborate embroidery on a folk blouse, a gloomy verse a seven-year-old painstakingly stitched on a colonial sampler, we want to touch the embellished cloth. For the cloth touches us. We want to feel with our hands what was made by hand in a kind of invisible handclasp. Instinctively, we want to know who made it, why, and how it was done. Handwork is a window into people’s lives. “Tell me how long it took someone to make a shirt,” one woman commented when we described PieceWork to her, “and I’ll understand what life was at that time in that place.”

But for all its evocative stories, this new magazine falls short if your fingers don’t itch to handle cotton threads, linen fabric, silk yarns, coils of pine needles, and braids of raffia. The importance of handwork lies as much in the process as in the finished item. There is pleasure and comfort and peace in the materials and rhythms of handwork. And the making deepens your understanding of the story from which each project grew. 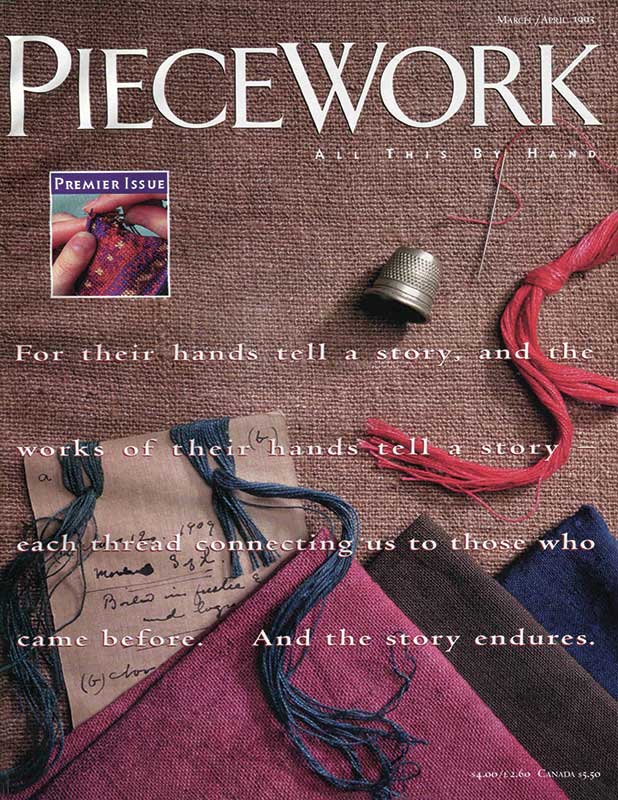 At times, it has been too easy for much of handwork to be dismissed as “women's work” or relabeled as art to establish its importance. We have come into a new time. We can explore and present handwork in the context of history and culture, portraying and honoring those who made it and taking pleasure in doing by hand what we have time for. “Who thinks they have time to do this?” one friend understandably exclaimed, examining a minutely patterned piece of Japanese shibori and thinking of the busyness of all of our lives. We do . . . to keep some of that “human time” in our lives.

The sense that handwork has meaning in our personal histories is reflected in current poetry, such as Eavan Boland's poem in Wordspinning, and fiction. The positive response to Whitney Otto's How to Make an American Quilt shows how quilt making—as history, as social process, and as a natural metaphor for piecing lives together—captures our imaginations. In Barbara Kingsolver’s novel Animal Dreams, a vivid afghan plays a key role as Cosima (Codi), the central character, pieces together her past, beginning with a visit to her father’s house. “Folded on a sofa was one thing I remembered well, a black crocheted afghan with red flowers. Hallie and I used to drag that thing around everywhere, our totem against disaster.” Later, the afghan becomes part of a ceremony.

In future issues, as PieceWork stories range from the Triangle Shirtwaist factory fire to Turkish socks, from Hmong needle workers in the United States to three generations of Athapaskan bead workers, you will discover that although historical handwork is often anonymous, it is still personal. It has fingerprints. Each piece “is of the maker’s self a part,” as Mary Gow Walsworth wrote in 1905, “And tells without her knowing.”