By the Dexterous Use of Two Threads: Gloves and the Handknitting Industry of Sanquhar, Scotland

Author James Brown in History of Sanquhar (1891) describes Sanquhar gloves and stockings in the early nineteenth century as “being woven on wires in a peculiar manner,” which presumably means knitted on fine needles.

Download the companion project to this article, the Prince of Wales Sanquhar Gloves. Find a link to the project PDF at the end of this article. —Editor

On the gentle green slopes of southwest Scotland’s Nith river valley sits the ancient town of Sanquhar—a crossroads that has drawn travelers and tradespeople for centuries. Rowan Reid, a local historian who has studied the history of Sanquhar knitting, describes the wool trade along Scotland’s southern coast as having been an important one since medieval times. By the eighteenth century, Sanquhar had developed into a central wool-marketing town; the July Sanquhar Wool Fair determined wool prices for all of southern Scotland, though the fair’s importance had begun to diminish by the end of the nineteenth century. Processing wool and making cloth employed many for multiple generations. From the eighteenth century on, knitting, including the production of socks and gloves, was counted among Sanquhar’s industries. Though the town has just 2,000 or so inhabitants today, Sanquhar is still known in handknitting circles for the intricately patterned gloves that bear its name.

Establishing a history of this specialized knitting is difficult because it was very much a domestic activity, a true “cottage industry.” Also, because the knitting took place in the sorts of households where the earnings were welcome but where few accounts or inventories were kept, relatively few written records exist. Rowan Reid wrote, “Knitting was usually a means of supplementing the income of subsistence farmers; it is therefore elusive in contemporary accounts and records. The work of women and children, the sick and the aged often does not figure as a recognized trade.”

During the eighteenth century, handknitting as a domestic industry was widespread in the poor, rural uplands of Britain, including Scotland, Wales, and the Yorkshire Dales. Farming was subject to the vagaries of the weather, and other occupations, such as lead mining, were subject to fluctuations in demand. The need to supplement varying and meager incomes spurred these regions to become centers for the production of handknitted goods, which were produced by all members of the family in odd moments. At the core of the handknitting industry were stockings knitted in the round to be sold; stockings for the troops especially were in constant demand during times of war. The British colonies and the rapidly industrializing cities of the United Kingdom also were markets for the stockings. Evidence of and references to the knitting and sale of Sanquhar gloves are few. Other textile industries left their mark: historical sources list the numbers of weaving looms in the area and give accounts of a carpet mill in a village close by; historical accounts mention knitting stockings. Though the 1912 records from Sanquhar’s churchyard list many people’s occupation as “weaver,” no graves record “knitter.” Nevertheless, a story can be pieced together through the gloves themselves, using fragments of documentation.

In the writings of local people more than 200 years ago, one can find hints that patterned knitting, probably stockings, existed. Stocking knitting started out as a home craft, but after the introduction of the stocking frame about 1770, it began to grow into an important industry throughout the Sanquhar region. Rowan Reid cites a description of the knitting industry from the 1770s: “Here are five frames in the stocking way, and a great deal of stockings knit and sold here, from one shilling to five shillings per pair, and a great demand for them.”

An account of Sanquhar in 1807 by local printer Thomas Brown, in the Union Gazetteer for Great Britain and Ireland (London: Vernor, Hood, and Sharpe) details the production of woven cloth, carpets, knitted stockings, and mitts. He writes that knitters “. . . by the dexterous use of two threads produce a substance resembling an outside and a lining. . . .” (The mitts mentioned would have most likely been fingerless, giving the hand protection while working.)

Author James Brown in History of Sanquhar (Edinburg: J. Anderson & Son, 1891) describes Sanquhar gloves and stockings in the early nineteenth century as “being woven on wires in a peculiar manner,” which presumably means knitted on fine needles. He goes on to say that this production could form the basis of a good industry for people in their own homes and that this would prevent the area from becoming depopulated. “But if this is to be done, it must be done without delay, as the secret of the manufacture is now confined to a very few. It threatens to become a lost art.”

Despite economic changes, however, glove knitting in Sanquhar survived. In the late eighteenth century, several factors had begun to cause handknitting in much of Scotland to wane. Among those factors were the industrialization of spinning and processing wool and the inability to compete with the price of inexpensive machine-made garments. Yet the gloves themselves remained. Historical examples are found in the Knitting & Crochet Guild’s collection, the Tolbooth Museum in Sanquhar itself, and the Dumfries Museum, about 20 miles (32 km) away. Some are very worn and darned, and some are single gloves without a partner. The examples in the Knitting & Crochet Guild’s collection are all thought to have been bought in Sanquhar, having been commissioned with the personal initials of the original owner.

Sanquhar gloves are handknitted with tightly spun wool in two colors in a variety of detailed patterns, of which the Duke is the best known. Other patterns include Prince of Wales, Shepherd’s Plaid, Rose and Trellis, Drum and Cornet, Pheasant’s (or Bird’s) Eye, and one of the oldest, Midge and Flea. Black and white is the most common color combination.

One of the earliest pairs of patterned gloves still in existence is found in the Dumfries Museum from the collection of local historian Dr. Thomas B. Grierson, who died in 1889. He recorded them as “. . . of a pattern formerly worked at Sanquhar.” They are knitted in the Duke pattern and are well over one hundred years old. About 1880, the Duke of Buccleuch, the local landowner, placed an order for a large number of gloves, according to Richard Rutt in his History of Hand Knitting. Other records from the end of the nineteenth century also suggest that gloves were being knitted in Sanquhar at that time. 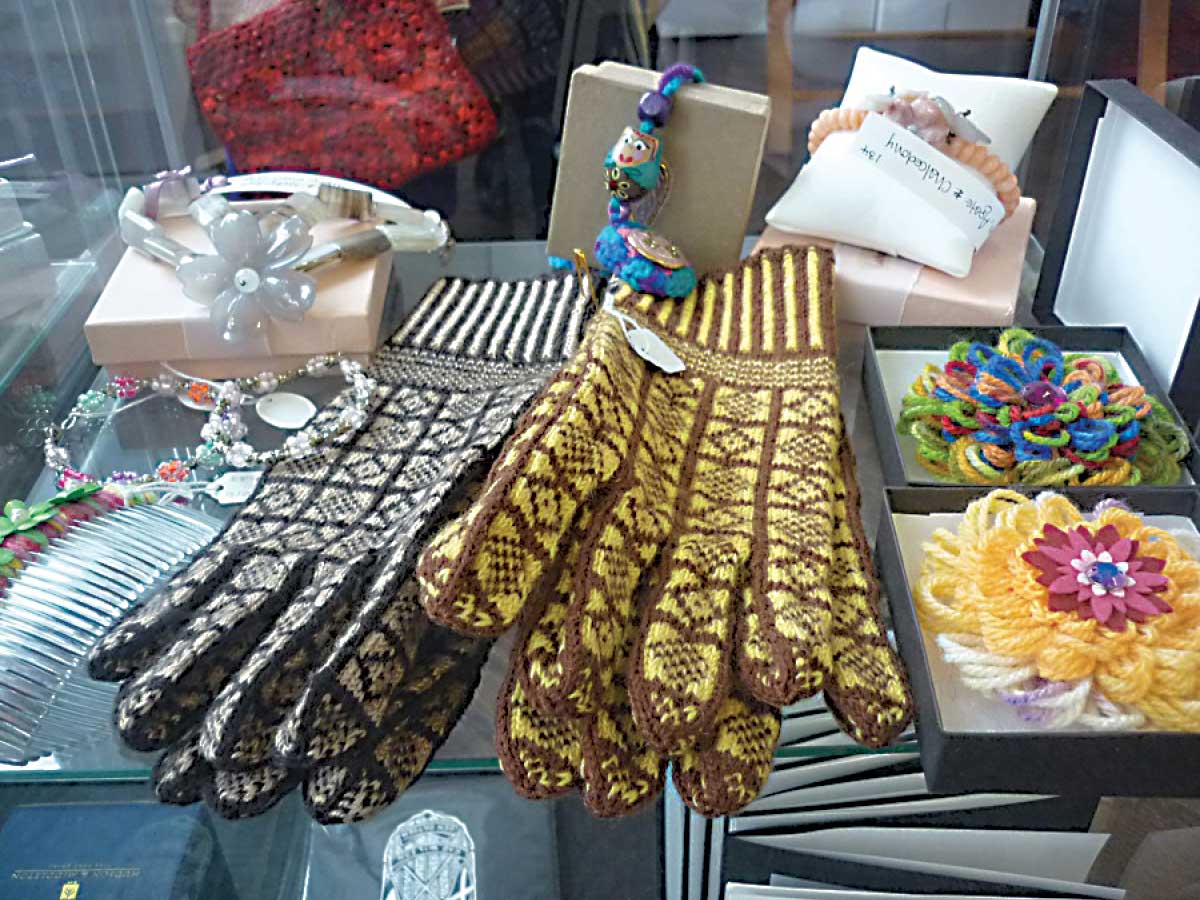 Gloves for sale in the local arts center, A’ the Airts, in Sanquhar. Photograph by the author and courtesy of the A’ the Airts director.

Sanquhar gloves were known to have been on sale in shops in Edinburgh in 1900; the town clerk of Sanquhar reported seeing them there. No doubt he would have been proud to see this product of his town on sale in the Scottish capital.

After the First World War (1914–1918), it seems that gloves were knitted for personal orders. At a wool shop in Sanquhar, visitors could place orders for gloves with particular initials. Documents at the Tolbooth Museum in Sanquhar note that the knitter would receive two shillings and sixpence for a pair of gloves with personalized initials for which the customer provided the wool. That was in the 1920s and 1930s, when visitors came to the area for hunting and fishing, as they still do. The fortune of the Sanquhar glove was possibly secured by the return to Sanquhar of Miss Mary Forsyth (dates unknown), who came back to her native town in 1933 as a teacher of domestic science at Sanquhar Academy. From that time on, every girl knitted a pair of gloves when she was about thirteen or fourteen years old. Girls from a Glasgow school, who were evacuated to Sanquhar during World War II (1939–1945), also were taught to knit the gloves. This teaching established a knowledge and skill base that has helped ensure the continued existence of the glove knitting.

After World War II, glove knitting continued, mainly for visitors to the town. By this time, according to the displays in the Tolbooth Museum, two women, Jessie Wilson and her daughter were active knitters of gloves and may have made a partial living from it. They were being paid five shillings for knitting a pair of gloves for which the customer provided the yarn. The patterns were passed on orally until 1955, when the first patterns were published in a woman’s weekly magazine, The People’s Friend. The pattern for a Sanquhar glove and scarf set was first published as a free supplement in The Scottish Knitting Book No 1. Later that same year, 1955, The People’s Friend published The Sanquhar Knitting Book, which included similar Sanquhar patterns.

In his History of Handknitting, Rutt wrote of Mrs. Thomson, wife of the parish minister, who was “using the Sanquhar fabrics for fully-fashioned hand-framed garments.” The same Mrs. Thomson, now in her late seventies, is still actively working on the production and continuation of Sanquhar knitting. She has written two instruction manuals for Sanquhar gloves and Sanquhar socks, available as kits through the A’ the Airts, Upper Nithsdale’s Community Arts and Crafts Centre. Gloves can be commissioned or bought at this center along with other items featuring the Duke pattern www.all-the-airts.com.

The tradition of knitting gloves continues. A Sanquhar knitting group communicates on Ravelry, and the written patterns have been re-issued by the Scottish Rural Women’s Institute. Handknitted gloves, along with other related Sanquhar-patterned items, such as greeting cards and key rings, provide an income in the twenty-first century.

About the Author and Designer. Dr. Angharad Thomas is an independent designer, maker, and researcher. She is also the textile archivist for the collection of the Knitting & Crochet Guild of the United Kingdom. She has worked as a teacher, knitwear designer, and university lecturer. In the course of her career, she has travelled to Europe, the United States, Japan, Africa, and Australia. When not knitting or writing, she’s often hiking and trekking in Britain and the Pyrenees. The author thanks all those in Sanquhar who helped with the research for this article and project, including the Dumfries Museum. She also thanks the board of the Knitting & Crochet Guild for permission to use the guild’s photographs, and colleagues in the guild for their feedback.

This article was originally published in Knitting Traditions, Spring 2014. 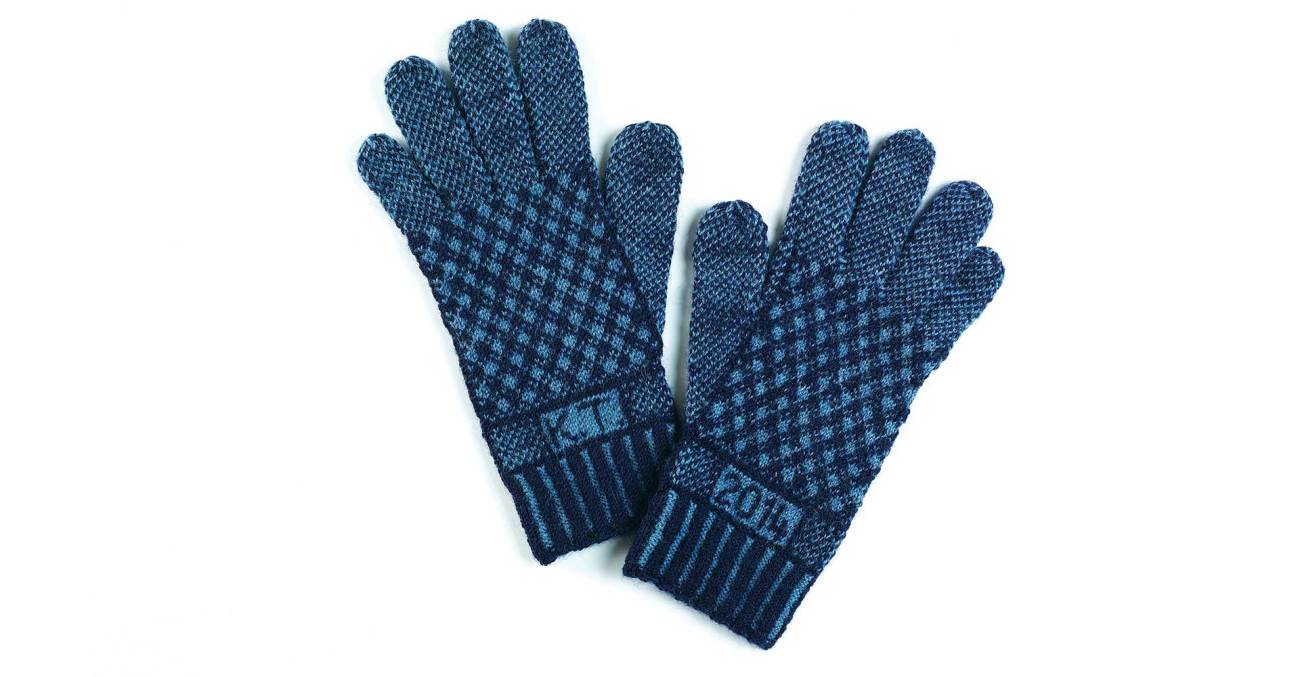 The Prince of Wales Sanquhar Gloves by Angharad Thomas were featured in Knitting Traditions, Spring 2014.

Knit Your Own Pair of Sanquhar Gloves

Download and knit the companion project, the Prince of Wales Sanquhar Gloves, featured in the Spring 2014 issue of Knitting Traditions.