The Very Best Afghans in the World

Using little looms are all the rage these days. Yet, these portable and versatile tools have been around for quite some time.

Weave-It afghan made by the author’s Aunt Kit (Kathrine Eldredge Rosenfelder) for the author’s mother. Photos by Joe Coca.

In the March/April 2010 issue of PieceWork, Robin Hansen recounts the story of her great-grandmother and the woven afghans she created on the handheld Weave-It loom. Here’s an excerpt from Robin’s article. —Editor

The nice thing about Grandmother’s afghans,” my mother once said, “is that they’re not too heavy. They’re not too stretchy; they’re not too warm; they’re not too big or too small. They’re just right for a nap anytime.” That was a lot more than one nice thing, but she left out two others: They are prettier than most afghans without being overstated, and they fold square and flat, unlike most knitted and crocheted afghans.

The afghans in our house were made of little woven squares in rich Victorian colors, pale pastels, or black and crayon-colored wool yarns. Because they were woven, they didn’t stretch much and were just right for a bed-top nap or a cuddle on the sofa when you were sick. They were probably as therapeutic as applesauce or chicken soup.

When I was a child, all our afghans were made by my great-grandmother Eldredge, who died a year after I was born. I have no memory of her, but my mother, my three aunts, and my older cousins had stories to tell.

Born in 1855, in Cape May, New Jersey, Mary Carll Foster was the daughter of the keeper of Cape May Lighthouse. At nineteen, she married her high school sweetheart, James Ware Eldredge, a member of the Life Saving Service (later the U.S. Coast Guard). They lived in Cape May their whole lives; James was later captain of the Cape May Life Saving Station at Cape May Point.

Mary Carll and James made most of their clothing and nearly everything else in their house. In long hours between emergencies at the Life Saving Station, James made sturdy split-ash baskets, knitted socks and mittens, and built furniture. My mother remembered quilting bees at their house: When Mary Carll finished piecing a quilttop, she invited her women friends in to help her finish it.

After James died in 1936, Mary Carll lost interest in life. She was ill for a year or so before her own death in 1941, nursed by her granddaughter, my Aunt Bert. It probably was then that she made her family-renowned afghans, one for each of six grandchildren. 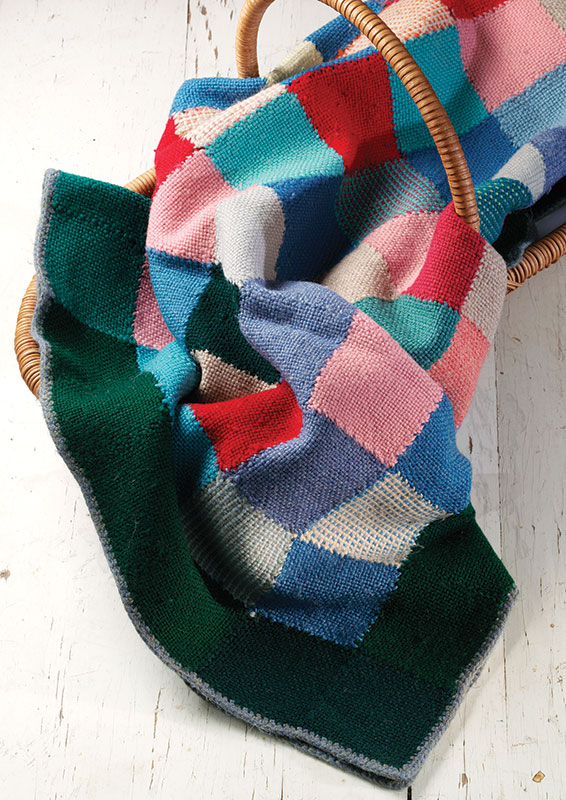 The author’s Weave-It afghan made by her Aunt Kit (Kathrine Eldredge Rosenfelder).

Grandmother’s afghans were varied but always colorful—diagonal stripes of color from edge to edge; checkerboards, with one dominant color and bright scraps of yarn, small groups of eight squares around a single unvarying color, and a large version of the patchwork Log Cabin design. All were sewn together and finished with a crocheted border.

Read more of the story in the March/April 2010 issue of PieceWork. Plus, weave Robin Hansen’s “A Weave-It Pillow or Chair Pad to Make” based on the afghans created by her great-grandmother. Find more pin-loom projects in the Summer 2021 issue of Easy Weaving with Little Looms.