Bagchi are traditionally given to a groom before, during, and after the wedding.

The open bag is filled with little items and then wrapped using the cord, or dori. Photos by Chitra Balasubramaniam

During the world-wide shutdowns due to the COVID-19 pandemic, we asked contributor Chitra Balasubramaniam to share a few samples from her textile collection with PieceWork readers. This is the first post in a 3-part series. —Editor

The bagchi (little purse or envelope bag) shown here came through a very old acquaintance of mine who specializes in soof embroidery. My friend has been a point of contact for a lot of information about this embroidery from the Tharparkar region of the Sindh province in Pakistan. This particular piece belonged to a close relative of hers who wanted to sell it. 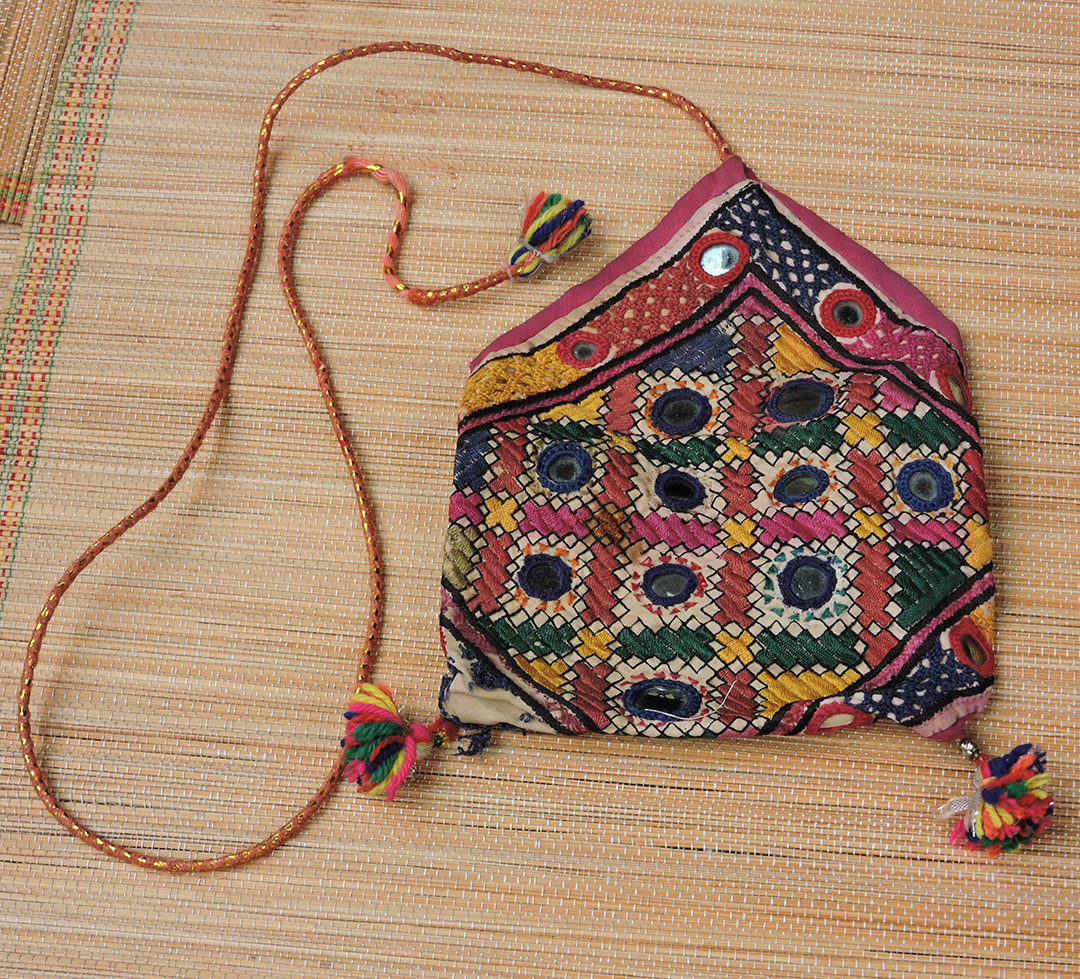 The back of the bagchi, or envelope bag, shows the entire ground worked with khareek embroidery. The embroidery along the sides is Sindhi Taropa, or Hurmucho, which was done in the Sindh province in Pakistan.

This bagchi was made for the relative’s wedding by her mother and grandmother. It is customary in their community to give a number of handmade items to the groom before, during, and after the wedding. In other communities across India, the embroidered pieces are made with gold and silver, with the objective being that in times of financial difficulty, the pieces can be sold, and the money used. For communities in Kutch, the hand-embroidered pieces are seen as protection in times of difficulty. It is the norm for the mother and grandmother to start embroidering such dowry pieces for the girl from the time she is born. As the girl grows up, she adds to the dowry. Today, several old dowry pieces are not made; they have been replaced by store-bought pieces. So instead of a bagchi, a purse or a wallet is given. 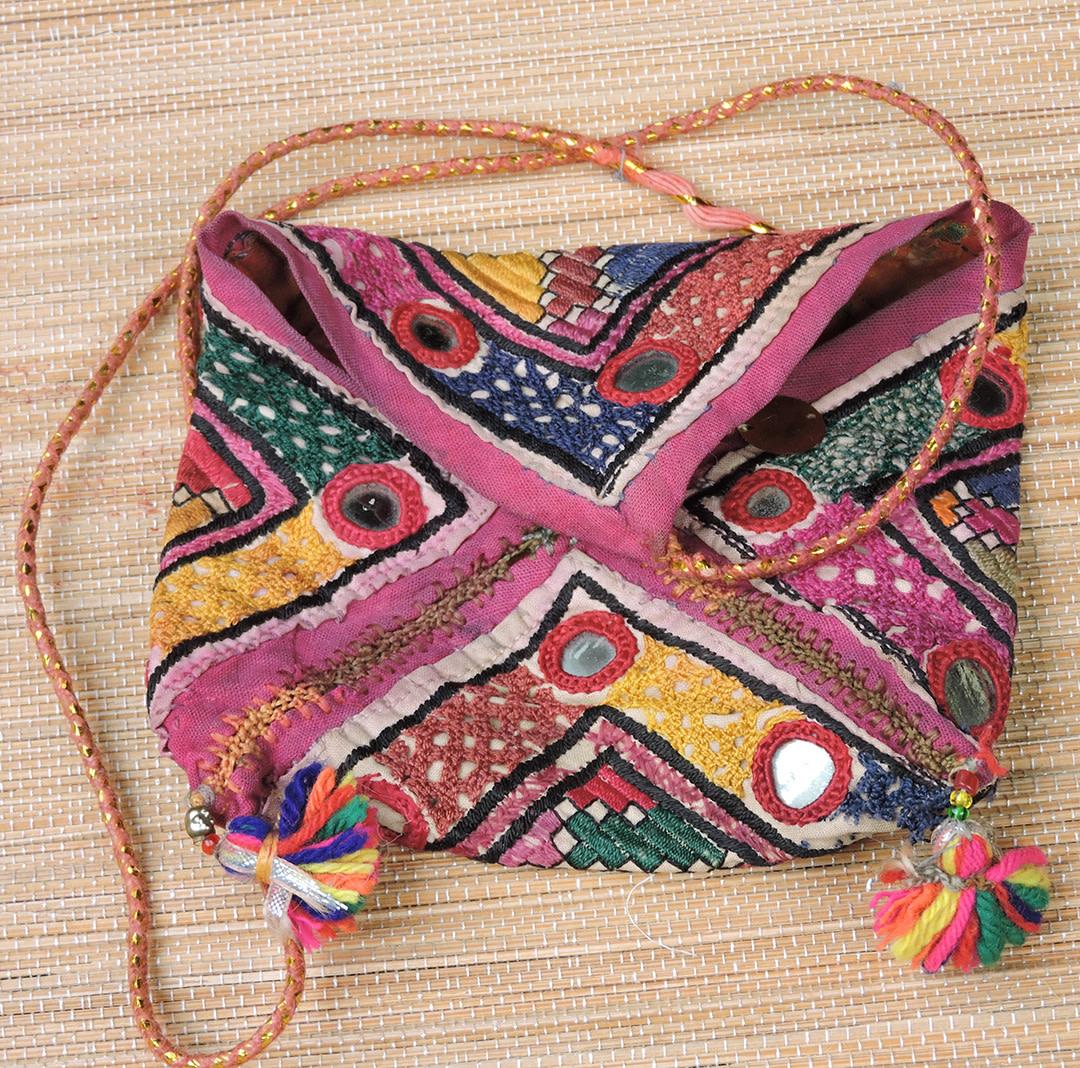 The closed envelope bag has no button with loop fastener, such as those found on modern bags, but the cord, or dori, fastens it closed.

Bagchi is referred to as a bag, and the size varies. It is usually shaped as an envelope, which is then closed using a cord that is tied around the bag. Occasionally, there is a little button with a loop to secure the bag shut, but more often, the bags are left open with a cord, or dori as it is called, to tie it all up. For engagements and weddings, larger bags are traditionally given, depending on the wealth and social standing of the bride’s family. Since this is a small bag, the bag measures 4 inches (10.2 cm) in length by 5 inches (12.7 cm) in width when closed, it was given as a gift to keep up traditions and general goodwill.

This little bag was probably given after the engagement and before the wedding. It was filled with personal toiletries for the groom: comb, mirror, and surma (a kajal or kohl eye liner applied to the lower eye lids). When the groom comes for the wedding, he carries the bagchi with him, tied to his belt.

This particular bagchi has pompoms that seem to have been added later, perhaps because the old ones had worn out. The stitches on the bag are called kharek. Kharek in local dialect means dates, which is what the stitches resemble. The khareek-embroidery style has a total repertoire of four to five stitches, which are used to innovatively embroider the entire piece. 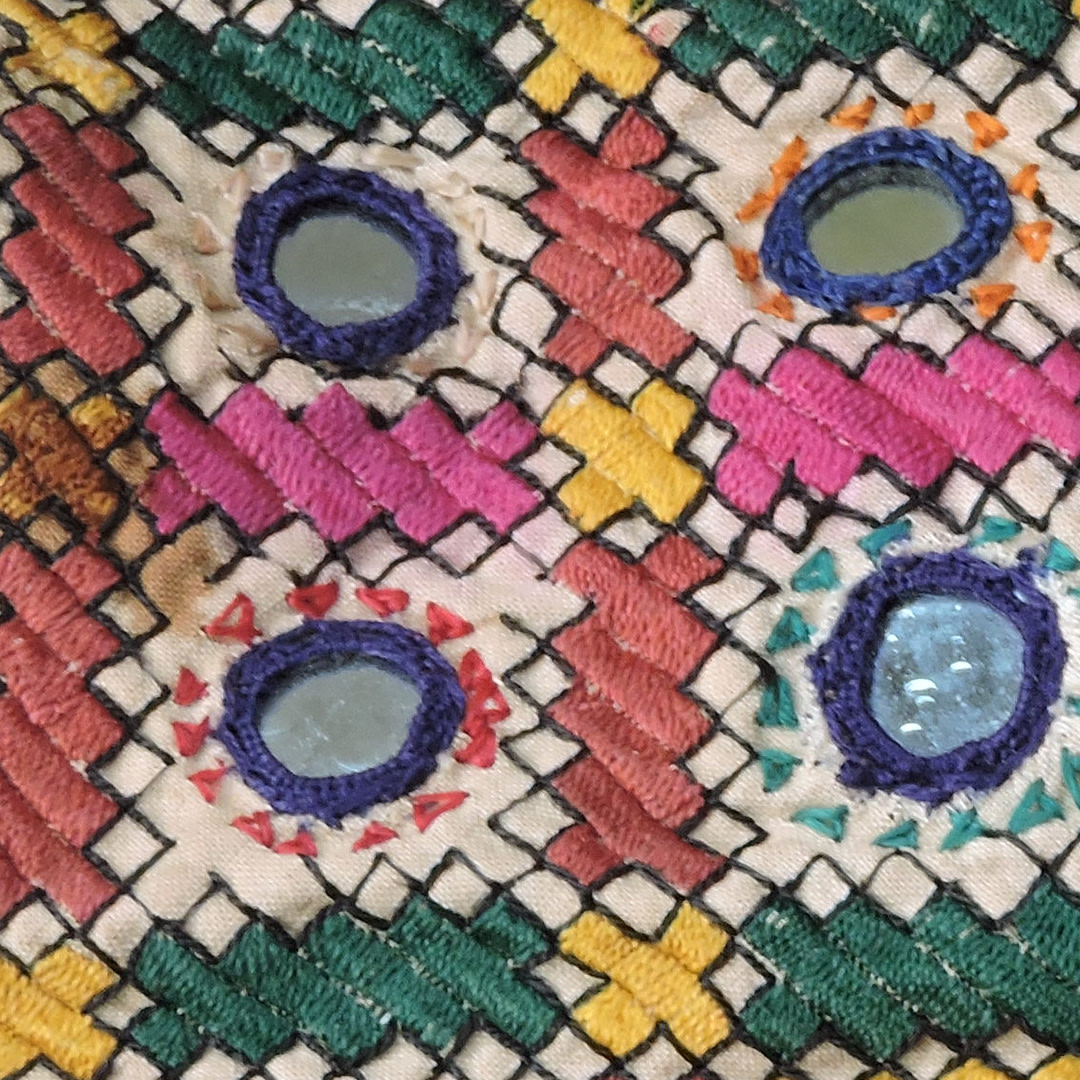 Detail of the back of the closed bag. Notice the stitches of embroidery along with the profusion of mirrors. Sheesha embroidery, or mirror work embroidery, is also a part of the tradition of this community.

Khareek embroidery, along with soof embroidery, came to India with the Sodha Rajputs who migrated from the Tharparkar region in the Sindh province of Pakistan, during the Indo-Pakistani War of 1971. The migrants settled in the Tharad Banaskantha district in Gujarat, where the embroidery is still done.