In the 19th century, patents for buttonhole scissors began to be filed at the United States Patent Office, and some of these designs are still in use today.

Cutting a buttonhole is just as important as stitching the buttonhole. One key feature of a perfect buttonhole is that it lie flat. If incorrectly cut, the buttonhole can ripple, become distorted, be too small or large, and wear out before the garment. In the worst case, the entire garment could require mending after a disastrous miscut.

The 1838 edition of The Workwoman’s Guide by a Lady recommends that you begin a buttonhole by cutting the opening with a “chisel or the proper scissors made for that purpose.” In the 19th century, when making handsewn buttonholes, students were instructed to cut and then stitch the buttonhole. While sewing-machine attachments to make buttonholes were available in the United States by 1862, handstitched buttonholes continued to be the norm.

A cutting chisel for buttonholes is a steel post with one blunt end and one sharp cutting end. The chisels were sold in sizes. With the sharp end against the fabric, a small piece of wood is placed under the fabric layers. Pressure is applied to the blunt end of the chisel cutting through the fabric, stopping at the wood barrier. These buttonhole cutters are sold today, often paired with a small block of wood.

The first United States patent for a scissor-style buttonhole cutter was in 1853. Patent Number 9734 was granted to Halsey D. Walcott of Massachusetts. The handles are used like a pair of cutting shears. One tip held a sharp razor blade–like edge; the other tip was a rotating solid bed to cut against. By rotating the solid bed, the cut size of the buttonhole was adjusted. 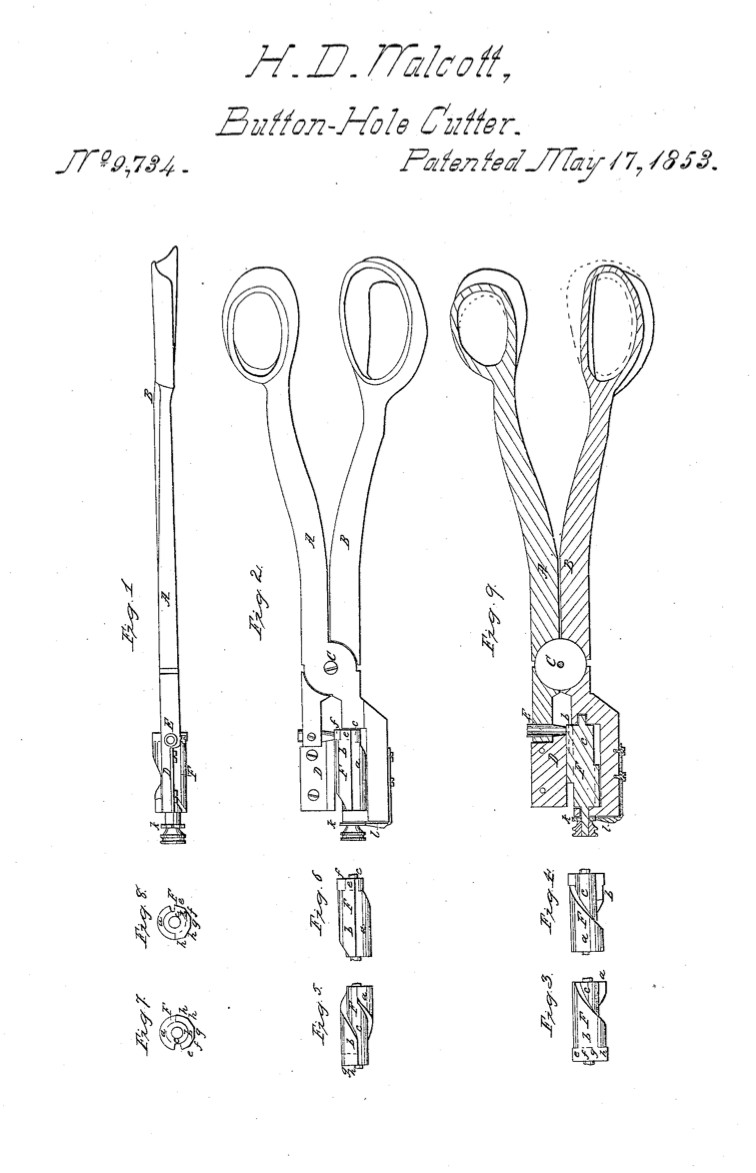 Since 1853, there have been more than 20 United States patents granted for hand-held, scissor-like buttonhole cutters. Each patent attempts to introduce a better way for the home sewer to cut buttonholes. “Cutting buttonholes is a slow and tedious process,” says C. Dickenson in his 1887 patent application. By 1996, Dorothy Compton’s patent application stated, “Buttonhole scissors have been used for more than one hundred years. Several designs for buttonhole scissors are known, but none has successfully enabled the user to quickly, accurately, and efficiently open the newly sewn buttonhole without occasional disastrous mistakes of cut.”

The various designs use scissor-like handles with various types of adjustable mechanisms that stop the handles from fully closing the blades. By preventing the full closure of the handles, the scissor blades can only cut the distance of the handle stop setting. If accurately measured, the buttonhole is cut the correct size. 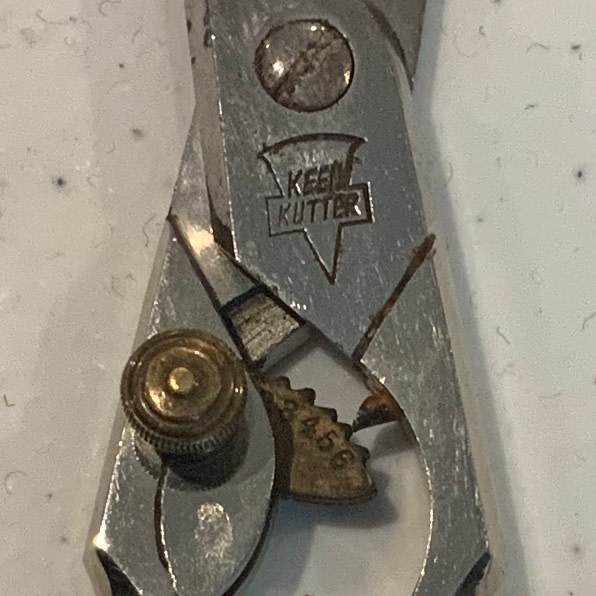 Detail of the sizing mechanism from one of the author’s pairs of buttonhole scissors. Photo courtesy of Dawn Cook Ronningen

The style of the adjustment mechanism varies very little over time. The mechanisms include screws, dials, and rachets. Placement of the adjusting mechanism is one feature that changes among different designs. Some are placed on the outer edge of the scissor handle; others are on the inside edge. These styles are all still available today.

Dawn Cook Ronningen is the author of, Antique American Needlework Tools. She lives with her extensive collections of antique needlework tools and textiles in Minnesota and blogs at www.collectorwithaneedle.blogspot.com.

Read more about handsewn buttonholes in the Summer 2020 issue of PieceWork.