PieceWork invited Spin Off editor Anne Merrow to give us an inside perspective about Nilda Callañaupa Alvarez's video workshop, Andean Knitting. 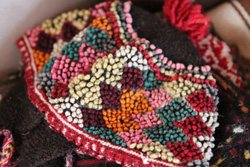 When you think of knitting, you may think first of sweaters, but knitting has a much more specific purpose in the villages around Cusco, Peru. Making a knitted hat, known as a chullo, is women’s work in some villages and man’s work in others, but the elaborate hats are almost all worn by men. A well-made chullo is a source of pride and even an identity piece, a distinctive and treasured textile. A man’s knitting skills (or those of the woman who knitted his amazing hat) are on display in the colorful headgear.

The stranded-colorwork patterns vary from village to village: Some are geometric and derived from the local weaving patterns. Some feature birds, animals, even people. One of the most visible differences is in the style of earflaps: some villages feature squared tabs about the size of postage stamps, while others are adorned with semicircles that stretch from brow to well behind the ear. It is said that there are 200 different types of knitted hats in the Peruvian highlands. 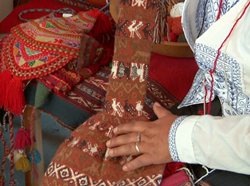 Knitters and stitchers can sometimes feel like part of a dying breed. When I work in public on a pair of trusty handknitted socks, the reactions from passersby often range from amusement to incredulity. Although I might be the lone knitter in a local café, the woman who taught Nilda Callañaupa Alvarez to knit was a true preserver of textile heritage.

Chinchero and other villages in the Peruvian highlands have long and rich knitting traditions, yet Nilda’s teacher was one of the last in her village. Younger people had lost interest in knitting, and the craft was slowly being lost. As a teenager, Nilda decided to learn to knit, and the skills she acquired have helped her maintain and promote the craft throughout the villages served by the Center for Traditional Textiles of Cusco. 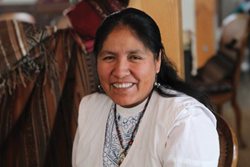 Nilda Callañaupa Alvarez learned to knit from one of the last knitters in her village. In her workshop Andean Knitting, she shares the techniques and traditions that make knitting in the Peruvian highlands unique.

Nearly all of the traditional knitted items are men’s chullos, though knitters also create babies’ and children’s hats, change purses, and even sleeves in the town of Chinchero. As the market for Peruvian knitting has grown, traditional knitters have begun making contemporary pieces such as mufflers and cell-phone cases.

Fortunately, there’s no reason I couldn’t wear an intricately knitted Peruvian-style hat. After watching Nilda’s video, I think I’ll start with a baby-sized version to practice knitting my own chullo.