One of the best parts of my job is working with PieceWork's exceptionally talented designers who in some cases are also its authors. In addition to creating beautiful designs, they research the historical context of a garment or object, a technique, or a cultural tradition, providing a rich perspective for their own work. I am consistently inspired by the passionate creativity and the commitment to the tradition of craft demonstrated by PieceWork's contributors. The November/December 2011 special issue on wool serves as a perfect example of the commitment and creativity, not to mention the resourcefulness, of our authors. 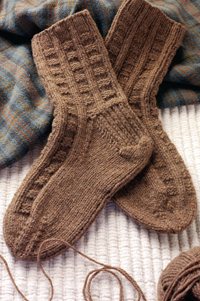 Ann Budd's socks knit from Manx Loaghtan yarn. Ann was just one of a crew of ultra-talented designers who, with no hesitation, made lovely projects—hat, mittens, socks, and a pillow—to showcase the wool from four rare sheep breeds. 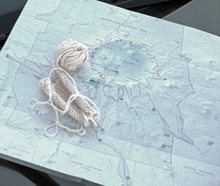 We asked the inimitable Deb Robson to write our centerpiece article about four rare sheep breeds and some of the people who have worked diligently to preserve them. In addition to writing about Manx Loaghtan, Leicester Longwool, American Tunis, and Churro breeds, Deb created swatches to show how the wool from each breed knits up. Traveling while swatching, Deb realized she didn't have any Leicester Longwool with her. What do you do when you're in need of wool spun from a rare sheep breed? You tweet, of course! And that's exactly what Deb did; she tweeted the need for Leicester Longwool en route between eastern Washington and southern Oregon. She had a response within 36 minutes with a connection to a breeder right near I-5. Deb acquired yarn for her swatches when she met Joanie Livermore, owner of Double J Ranch in Oregon City, Oregon at a rest stop alongside the highway. And while Deb Robson capitalized on twenty-first century technology, Charlotte Booth specialized in the ancient, taking us all the way back to the sixth century B.C. with a thorough exploration of the history and use of wool in ancient Egypt, sharing her pattern to re-create a pair of two-toed Egyptian socks, circa A.D. 400. 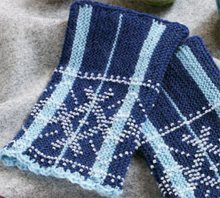 Some of our authors travel the globe in the present day, including Donna Druchunas, who researched the knitting traditions of Lithuania, forging friendships along the way. Exploring Vilnius, Lithuania, last summer, Donna visited textile artist Irina Juškiene from whom she learned about traditional Lithuanian wrist warmers knit from wool and beads.
Irina Stepanova drew on her own extensive collection of vintage needlework patterns to tell the story of Berlin-work patterns of the mid-nineteenth century with instructions and detailed charts for embroidering a sweet needle book.
These are just a sampling of the fascinating articles and their companion projects in the November/December 2011 issue of PieceWork. Open its pages to discover even more—all possible because of the talent, passion, and commitment of remarkable authors and designers.