The Hidden Makers of Mongolian Textiles

In the special issue Folk Knitting, the hidden stories of knitting and fabric from around the world come to light.

I went to Mongolia with my husband a few years ago to see a solar eclipse. Well, that took about three minutes. I spent the rest of the time looking for fiber work in the vast expanses of the Altai Mountains and the Gobi Desert. There was much art to see, but the makers—the spinners, weavers, felters, embroiderers— were elusive. “Oh yes,” our guide would say. “I know a lady who spins camel down. I don’t know where she lives, though, because she moves her yurt every three months.” We lived in felt yurts (or gers, as they call them there), which were remarkably comfortable both in the frigid mountains and the blazing desert. “Where did these big pieces of felt come from?” I would ask. “Oh, somewhere in Ulaanbataar,” they would say. But nobody knew quite where. Somewhere they still make it the old way, dragging it behind horses. Somewhere. 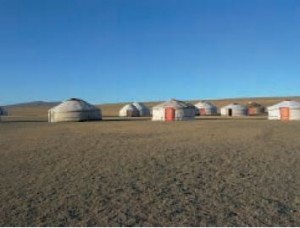 We visited a family in the desert, a family who enthusiastically shared their camel-milk cheese, yogurt, beer, and vodka. (You have not imbibed until you’ve tried camel-milk vodka.) A huge bale of cashmere was pushed up against the wall of their yurt, big as two refrigerators, enough to buy the family a brandnew SUV. “Where are the goats that produced all this?” I asked. “Oh, out there,” they indicated with a wave of the hand. All we could see for miles and miles was sand and camels. It was a mystery. 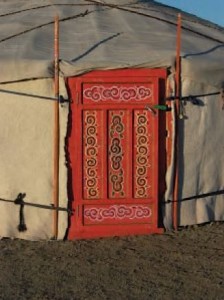 In the mountains, we saw acres of fine chain-stitch embroidery. It embellished the interior of the yurts, the saddlebags of the horses, the panniers of the motorcycles that are a favored vehicle there. Yet I never saw a woman (or man for that matter) holding needle and thread.

Mongolia is vast and empty. Almost half of the population of 2.8 million is crowded together in Ulaanbataar; most of the rest live nomadic lives scattered about the open spaces. You can drive over the landscape (there really aren’t many roads as such) for hours without seeing a soul. People have few possessions, just what they can load up on their camels or their trucks for their seasonal migrations. Yet so much is made by hand, somehow: the camel trappings, the yurts and their beautiful interior hangings, the felt rugs, the ceremonial garb. The touch of human hands infuses the land like a secret whisper.

If only the whispers had told me where to find the makers . . .
If you're craving more tales to satisfy your wanderlust, be sure to check out Folk Knitting.