A Handsome Centerpiece for the Library-Table

The butterfly is a popular motif, always; and probably it has never been used to better advantage than in the decoration of the centerpiece illustrated.

The cover of the October 1918 issue of Needlecraft, featuring a centerpiece with six butterflies. The copy for this cover project states: “[i]t is in the best of taste, and the centerpiece may well find a place in the library, living-room or hall of any attractive home. . . .” Collection of Susan Strawn.

Below are the instructions for the lovely butterfly centerpiece shown on the cover of the October 1918 issue of Needlecraft. They are printed here exactly as they appeared in that issue. In smaller type at the end of the first column are the options for the pattern, fabric, and thread that Needlecraft offered: “Perforated stamping-pattern, 25 cents. Transfer-pattern, 15 cents. Stamped on 24-inch tan linen, 75 cents. Floss to embroider, $1.30. Crochet-thread for edge, 30 cents extra.” —Editor

The butterfly is a popular motif, always; and probably it has never been used to better advantage than in the decoration of the centerpiece illustrated. The colors are well chosen and effectively combined; although rich in appearance there is nothing about the work to hint of gaudiness—it is in the best of taste, and the centerpiece may well find a place in the library, living-room or hall of any attractive home.

The butterfly measures nine and one-half inches from tip to tip of upper wings, and reminds one of the rare specimens sometimes found in collections, but never seen outside them unless in some tropical land.

The legs and antennæ are outlined with black, in close, heavy stitch; body and wings are also outlined with black, but this is not done until the embroidery is completed. The upper part of the body is done solidly with black, as are the tips of the wings. Beginning with the lower part of the body, work the tip in satin-stitch with the darkest shade of golden brown; make the next bar of black, the next with a medium shade of golden brown, the next of black, next of yellow, next with medium brown and finish with the lightest shade of brown. Work the edge of the lower wings, between the lines that are to be outlined with black, with medium brown, taking stitches of this up into the black of the tips; inside the second line fill in the tip with dark blue, leave a space which is filled with scattered French knots of yellow, make a narrow band of blue across the wing—outlined on both sides with black, as are all the bars save those across the body; leave a space to be filled with the knots, as before, and finish with blue. The upper wings have the space between the lines, or the edge, worked with the darkest shade of brown, taking stitches up into the black tip, as before; two narrow bars of yellow, curved, cross the wing at even distances apart, and the spaces between these and the portion joining the body — also of yellow — are filled in with scattered knots of blue. At the base of the antennæ two tiny circles are outlined with yellow and filled in with black. As a whole, the butterfly seems very real indeed, and is certainly a lovely creation of the needle. 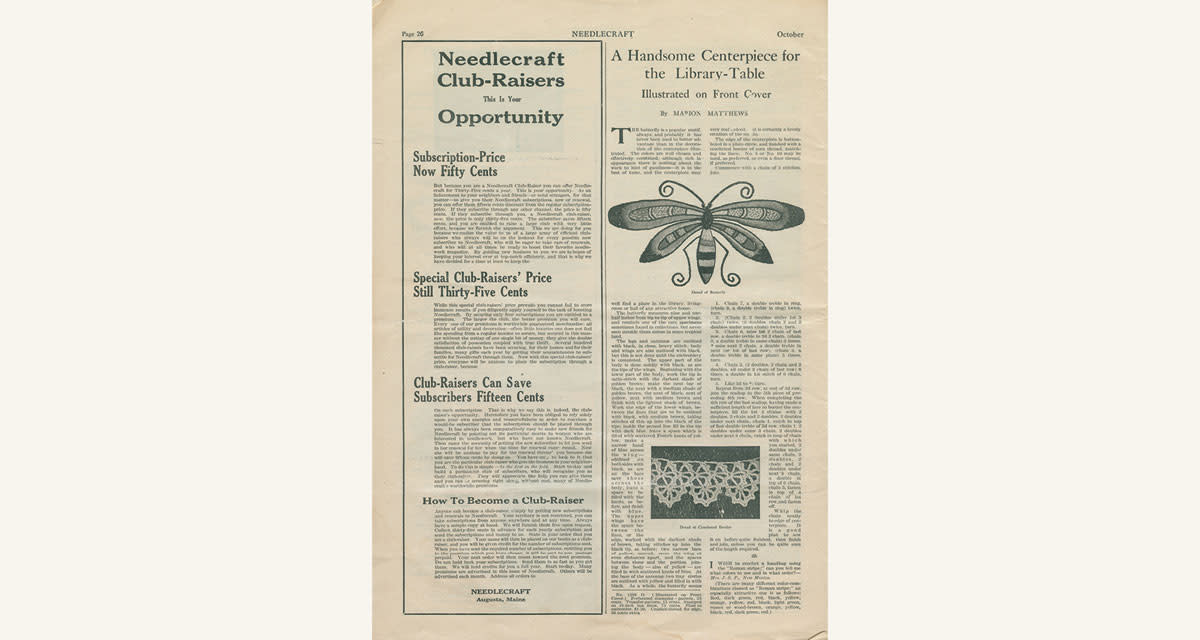 The page from the October 1918 issue of Needlecraft with the instructions for embroidering the butterflies and crocheting the edging for the centerpiece shown on the cover of the issue. The magazine offered the pattern in a variety of ways; they are outlined at the bottom of the first column of instructions. Collection of Susan Strawn.

The edge of the centerpiece is buttonholed in a plain circle, and finished with a crocheted border of ecru thread, matching the linen. No. 5 or No. 10 may be used, as preferred, or even a finer thread, if preferred.

This project was originally published in the Winter 2018 issue of PieceWork.