Spin Off Winter 2019 included an article chronicling Sarah Wroot’s adventures in weaving handspun singles, fulling cloth with a wooden mallet, and more as she re-created an eighteenth-century textile.

Sarah Wroot explores handspun, handwoven fabric in a variety of finishes in “The Quest for Cassimere: Re-Creating Eighteenth-Century Cloth.” Photo by George Boe

Spin Off Winter 2019 included an article chronicling Sarah Wroot’s adventures in weaving handspun singles, fulling cloth with a wooden mallet, and more as she re-created an eighteenth-century textile. We wanted to highlight the finishing techniques that Sarah explored with her handspun, handwoven cloth samples to mimic historic finishing processes. 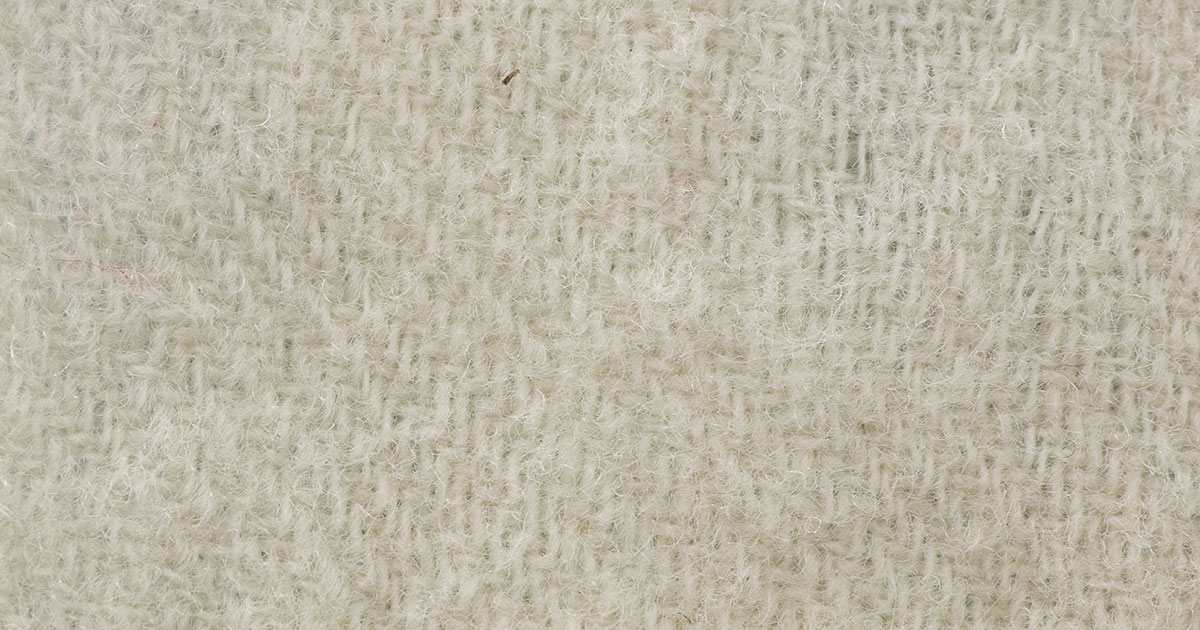 Take a closer look at the fabric Sarah was able to create that most closely matched a cassimere swatch held by the Victoria and Albert Museum.

In her article, Sarah explains that prior to the Industrial Revolution, almost every area of England produced a cloth suited to the wool of its sheep. One common type of cloth was broadcloth, of which there were several kinds. —Kate Larson 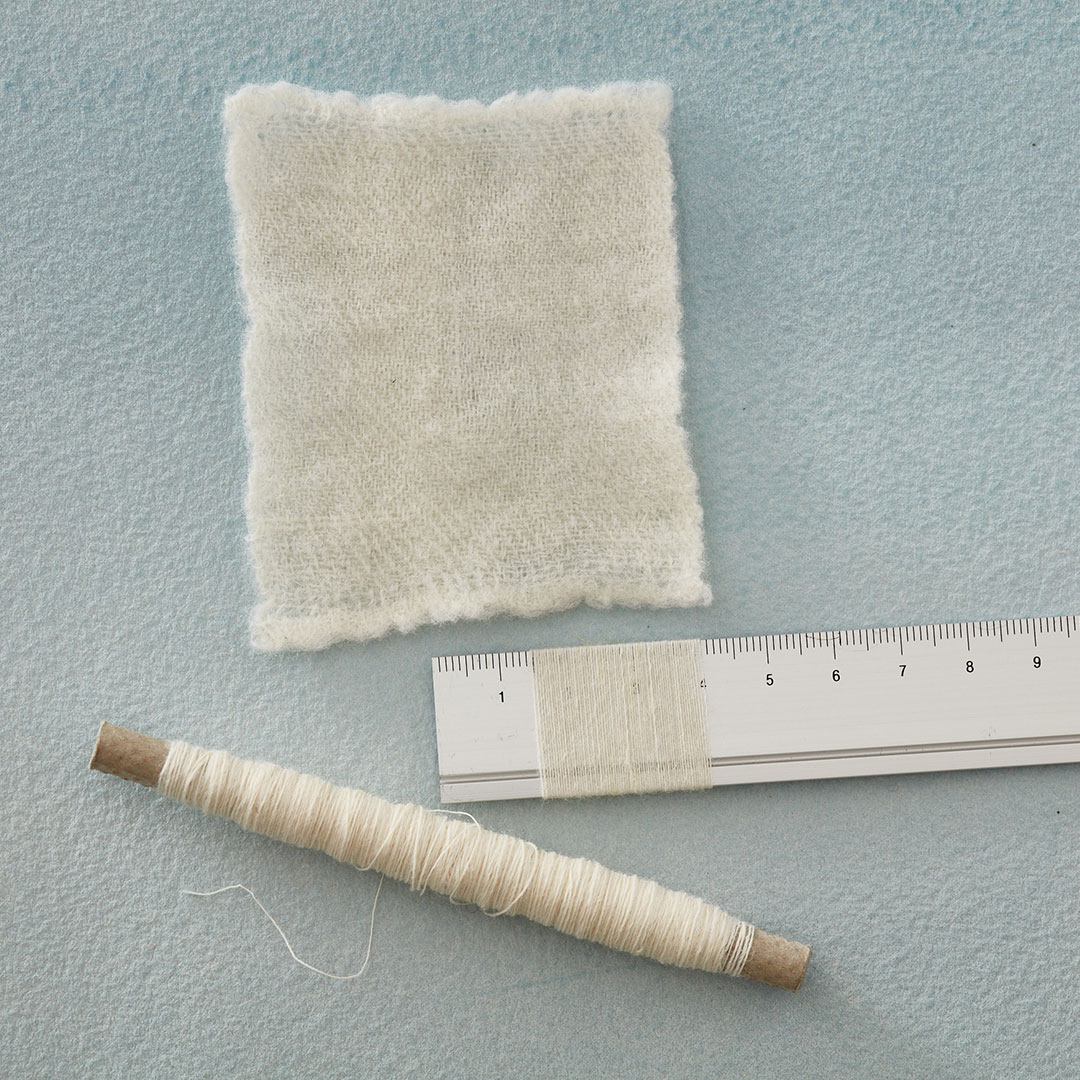 What is cassimere? Sarah had to find out! Her samples were spun at approximately 9,000 yards per pound and sett at 40 ends per inch. Photo by George Boe

In southwestern England, coarser wools were hard-spun for wide warps, and softer, shorter wools were carded and spun-soft for weft. The resulting plainweave cloths were fulled; teaseled (brushed with fuller’s teasels or, later, a wire gig) to raise a nap; and sheared. During this finishing procedure, the cloth would shrink and become a dense, hardwearing, water-resistant fabric known as broadcloth. The various types of broadcloth were staples of the English textile industry from the fourteenth century to the sixteenth.

Finishing processes can completely change the character of a fabric. While the yarn in Yerbury’s cassimere was quite different from that used in traditional broadcloths, the finishing processes were largely similar.

Fulling In Yerbury’s time, the fabric would have been fulled by experts in a water-powered fulling mill. Imitating hand-fulling by manipulating one of the samples with my fingers created a more uneven, thicker fabric than seemed right, so I imitated an early-medieval fulling mill by wetting the remaining samples with a little soap and gently hammering each sample as evenly as possible with a wide, flat, wooden mallet wrapped in plastic. This took more than an hour but produced a very different fabric—smoother, denser, and thinner. I have limited experience with fulling; the fabric didn’t close up as much as I’d expected, so if I do this again, I’ll sett the warp more closely.

Raising the Nap When dry, both sides of the last two samples were brushed in the direction of warp and weft (not diagonally, since that might deform the fabric) with a fine nailbrush to raise the nap for shearing.

Shearing Although it seems simple, immense skill was needed to hand-shear the nap evenly across the full width and length of a bolt of cloth; shearmen are said to have been the most highly paid workers in the textile trade. I found that my horizontal pile-shearing scissors proved too thick, so I used embroidery snips as a miniature version of the shearman’s shears. 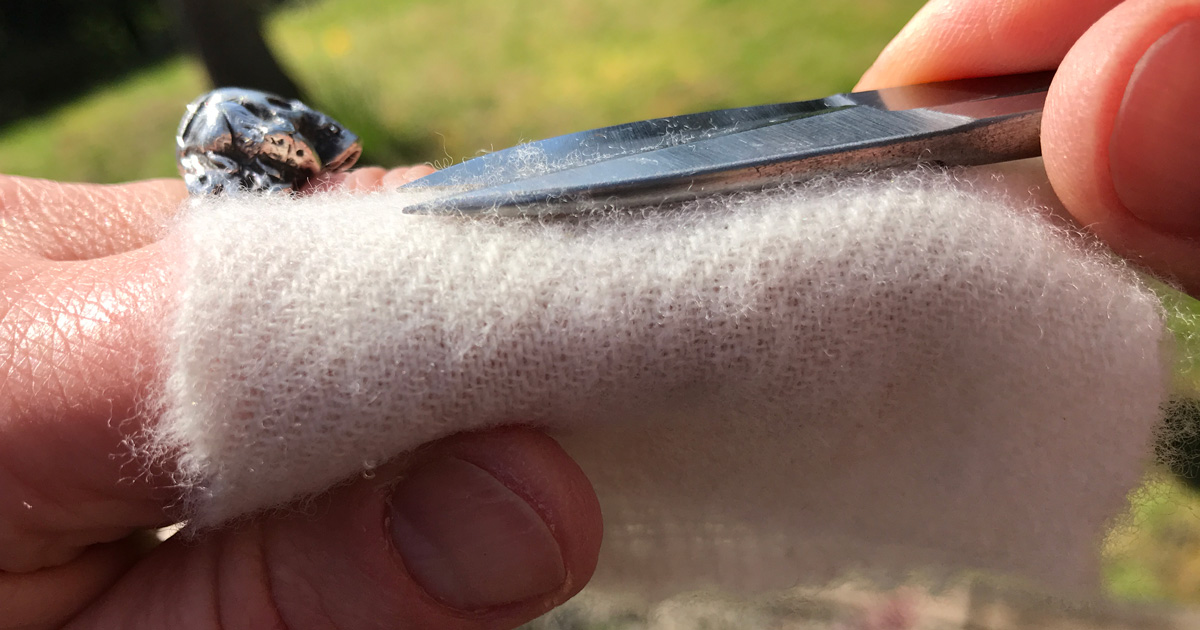 When Sarah Wroot and her husband arrived in Canada’s Cowichan Valley in 2017 after 40 years in the United Kingdom, her spinning and weaving equipment and allowable fiber stash amounted to roughly half their household goods. Sarah is now putting it all to good use and recording some of her explorations at www.wroot.com.