Queen Victoria (1819–1901) was entranced, enthralled, and enthusiastic for and about lace, be it knitted, needle, or bobbin.

“We are not amused!”
Nevertheless, Britain’s Queen Victoria (1819–1901) was entranced, enthralled, and enthusiastic for and about lace, be it knitted, needle, or bobbin. Her ardor was interlocked with a sense of duty and a genuine concern for her subjects. Particularly when lacemaking communities encountered hard times, royal commissions for lace made in those localities often provided income that was much welcomed.

Preparing for her wedding in 1840 to Prince Albert (1819–1861), Victoria specified a white dress with a lace flounce over it and a matching lace veil. The dress, designed by Mary Bellans, was made from satin produced at Spitalfields, London; the lace was designed by William Dyce, Fellow of the Royal Society of Edinburgh, a member of the Royal Society of Arts and the Royal Academy of Arts, and head of the Government School of Design (later the Royal College of Art) in London.

Initially, the lace was to have been supplied from Brussels, Belgium, but Victoria countermanded this instruction, specifying that the lace be manufactured in Great Britain and that it be in the Honiton style. Honiton lace, which takes its name from the East Devon market town of that name, actually was manufactured in several villages within a 40-mile (64-km) radius of the town. Honiton was the main collection and shipping point for the London stagecoach and later for the railway. According to my father, a teacher in the area in 1935, girls in the sixth to tenth grades still were being taught lacemaking, long after its manufacture ceased to be profitable in the region.

The lace for Victoria’s veil, which measured 54 inches (137.2 cm) square, and the flounce, 144 by 27 inches (365.8 by 68.6 cm), were made in the Devon coastal villages of Branscombe and Beer, engaging 200 lacemakers from March to November 1839. The queen sent her own representative, Miss Bidney, to supervise and ensure timely completion, after which the designs were destroyed to ensure the uniqueness of the patterns. Today, the cost of the lace would exceed $1,000,000.

Among the royal couple’s many wedding gifts was a pair of fine stockings in Shetland knitted lace, presented by Arthur Anderson (1792–1868), a native of the Shetland Islands and owner of the Peninsular and Oriental Steam Navigation Company (P&O). That the stockings pleased Victoria was obvious when she promptly ordered a further twelve pairs for her use.

The fine patterns of Shetland lace, made possible by using single or two-ply yarn spun from the soft wool taken from the throat of Shetland sheep include Crest of the Wave, Old Shale, Print o’ the Wave, Shell, Cat’s Paw, Spider’s Web, and Razor Shell. Shawls made from this yarn are of generous proportions yet can pass through the circle of a wedding band.

In 1849, while she was in residence at Balmoral in Aberdeenshire, Scotland, the queen received a gift of bobbin lace made in the village of New Pitsligo, near Peterhead. The early 1800s had seen the development of a fine bobbin lace in the village following the marriage of John Hall to Margaret Scott (dates unknown) of Huntly, who had learned the rudiments of lacemaking and taught the techniques to the women in New Pitsligo.

When the Very Reverend William Webster (1810–1896) set about improving the material well-being of his parishioners on his arrival at St John’s Episcopal Church in New Pitsligo in 1841, he brought the attention of the local laird, Sir John Stuart Forbes of Fettercairn (1804–1866), to the industry of the village women. The laird hired a woman from Aberdeen, previously a lady’s maid in France, to teach the women the finer points of lacemaking and increase the value of the lace.

Foreign influence is reflected in the method of construction and style of the lace, the use of flat pillows, continental bobbins, and the pattern’s foot side arranged to the left. One hundred and sixty women were employed, the popularity of the lace spreading through vigorous promotion by the Forbes family as well as by news of the presentation to Her Majesty. Unsurprisingly, orders for edging lace quickly followed.

Victoria’s passion extended to the lace of Ireland, where those unable to escape the famines of the 1840s by emigration to the New World faced starvation and abject poverty. With their relief in mind, convents and wealthy landowners sought ways of bringing industry to their communities. One of the most successful measures was to introduce the manufacture of lace, in crochet and appliqué styles, many copying the older continental patterns of bobbin lace.

Various styles were developed, each becoming well known and fashionable. Kenmare received orders from Her Majesty. Collars in needlepoint lace and articles for his wife, Princess Alexandra (1844–1925), were purchased by Victoria’s son Albert Edward, later King Edward VII (1841–1910), from St. Clare’s Convent in 1903. (Albert Edward had been wearing lace at least as early as his christening, when he wore a gown of Honiton lace.)

Youghal, County Cork, grew as a center of crochet lacemaking, production, and instruction, starting at the Poor Clare Convent. Such was Queen Victoria’s interest that in 1873 she invited the Youghal ladies to give a demonstration of their skills at Buckingham Palace. She herself was a keen participant in the comparatively new art of crochet. When Princess Mary of Teck, later Queen Mary (1867–1953), married Queen Victoria’s grandson Prince George, later King George V (1865–1936), July 6, 1893, she wore a wedding dress whose train was made of Youghal lace containing 5,250,000 stitches and 12 miles (19.3 km) of thread. 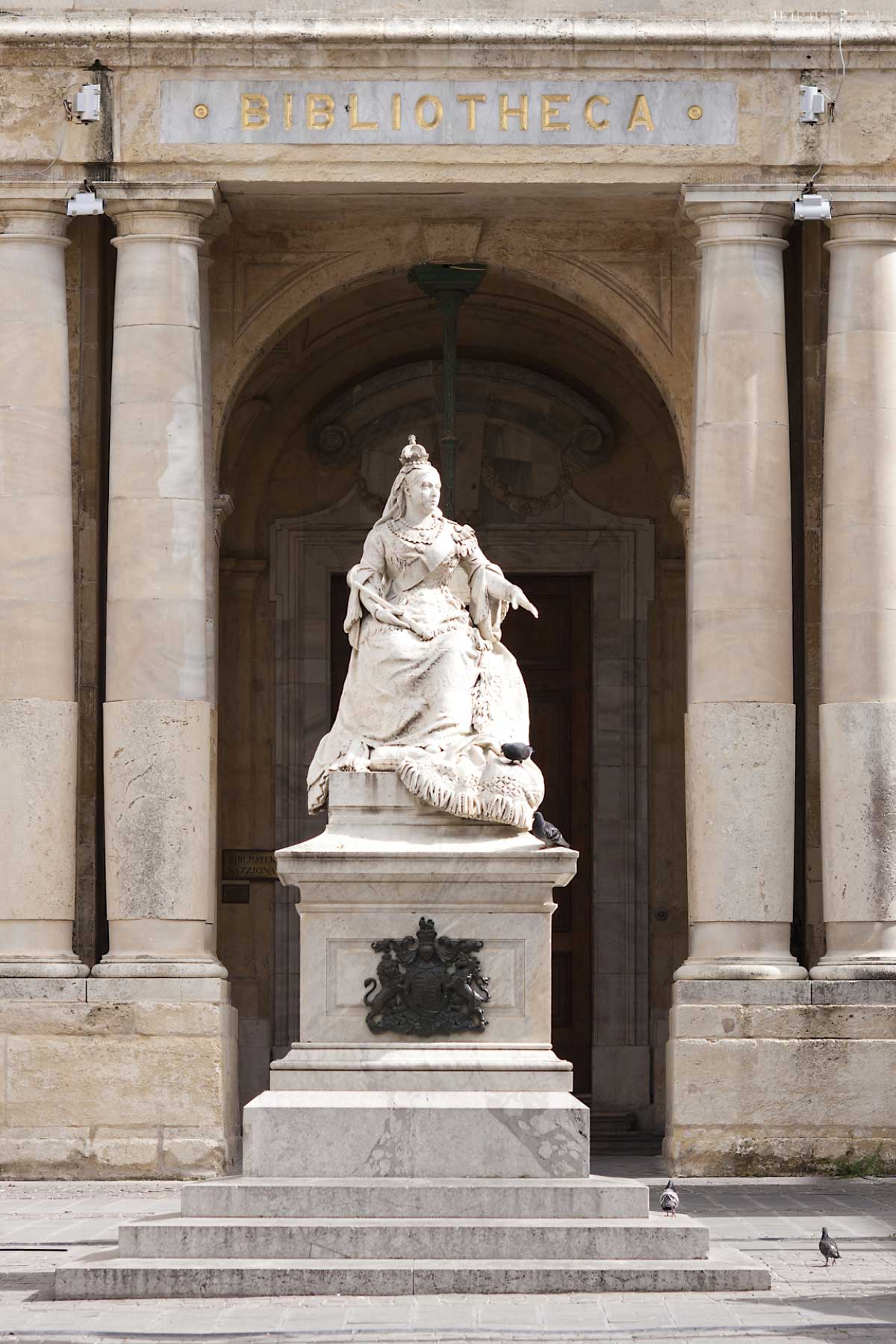 Statue of Queen Victoria in Republic Square in front of the National Library in Valletta, Malta. Victoria is bedecked in Maltese lace. Photo by AnneMS © Shutterstock

It is recorded that all types of Irish lace were popular in the royal household, the appliqué style of Carrickmacross as well as the embroidered laces of Limerick, Borris, and Macsaint. Not only was Irish lace popular with Queen Victoria; vast quantities also were sold to the public through the Lace Depot in Dublin, Harrods in London, and Marshall Field in Chicago. The interest in lace, and royal fashions in general, was worldwide: San Francisco’s Daily Alta California of May 24, 1868, reprinted an article from The Times of London detailing the costumes and accessories of Queen Victoria and her guests at a Buckingham Palace reception on April 23rd of that year.

On her Diamond Jubilee in 1897, Victoria was presented with a Maltese-style fan by the Worshipful Company of Fan Makers made not in one of the recognized lacemaking areas but in the county of Kent, in southeast England, by a Miss Lizzie Oldroyd (dates unknown) of Denne Manor, Chilham. A sample of Maltese lace had been presented to Her Majesty at an exhibition at the Crystal Palace in London in 1881, and subsequently an order was placed for eight dozen short mitts, eight dozen long mitts, and a scarf. Victoria and her lace have left a lasting impression on the island of Malta. In Valetta, the capital, a statue (recently restored) standing in front of the library in Republic Square, depicts Victoria herself bedecked in Maltese lace.

Queen Victoria’s passion also encompassed orders closer to home for Buckinghamshire, Bedfordshire, and East Midlands lace. It is reported that she required all her pillows to be edged in lace. Not only did she love lace herself, she encouraged family members to follow her example. Her granddaughter-in-law, the future Queen Mary, after opening the North Bucks Lace Association’s 1897 exhibition of Buckinghamshire pillow point lace, placed an order for 330 yards (301.7 m) of lace. Her Majesty’s own order the previous year had constituted a full winter’s output for the lacemakers of the association.

In 1872, Lady Victoria Welby (1837–1912), one of Queen Victoria’s godchildren, founded the School of Art Needlework; Victoria’s third daughter, Princess Helena (1846–1923), became its first president. In 1875, the school was granted royal patronage and became the Royal School of Needlework. The royal connection with the school and lace continues. Royal School of Needlework embroiderers stitched the lace on the wedding dress worn by Kate Middleton (1982– ) when she married Prince William (1982– ) on April 29, 2011. Now Duke of Cambridge, William is second in line to succeed his grandmother, Queen Elizabeth II (1926- ), who is one of Queen Victoria’s great-great-granddaughters.

Queen Victoria took her love of lace with her to the grave. She instructed that she be interred with her lace wedding veil draped over face.

Christopher John Brooke Phillips was born in England and now lives with his wife, Patricia Ann, near Valencia, Spain. A retired businessman, he researches and writes on matters of historical interest. A historical novel set in the twentieth century is in the works.

This article was originally published in the May/June 2014 issue of PieceWork.