This Week in History: The Great Exhibition of the Works of Industry of All Nations

May 1, 1851: The Great Exhibition of the Works of Industry of All Nations was the brainchild of Henry Cole, an English artist and inventor.

Queen Victoria, accompanied by Prince Albert and their children, opens the Great Exhibition in the Crystal Palace, Hyde Park, London, May 1851. Detail from the official painting by Henry Courtney Selous. Photo by Hulton Archive/Getty Images.

Kathleen Rotella, in her article “Application Lace at the Great Exhibition of 1851,” in PieceWork’s November/December 2001 issue, sets the stage:

Engraving entitled “The Magnificent Iron and Glass Building for the Great Industrial Building in Hyde Park” dedicated to Prince Albert. The Crystal Palace was built to house the Great Exhibition of the Works of the Industry of all Nations, conceived by Prince Albert (1819–1861). It was designed by the landscape designer Joseph Paxton (1801–1865). The exhibition was held at Hyde Park, London, in 1851. Photo by SSPL/Getty Images.

The Crystal Palace building was both massive and magical. Although the building measured 990,000 square feet (92,000 m2), it was airy and filled with light; the modular construction allowed it to be built in less than year. That same feature allowed it to be dismantled, redesigned, and reconstructed in the Sydenham area of London; the building was completely destroyed by a fire in November 1936.

Exhibition exhibitors came from twenty-seven countries, the British Dependencies, and the United Kingdom. Among the “industrial achievements and fine and applied arts” showcased at the exhibition, in addition to application lace, were Mining and Mineral Products; Substances Used As Food; Machines for Direct Use, Including Carriages, Railway and Marine Mechanism; Manufacturing Machines and Tools; Civil Engineering, Architecture, and Building Contrivances; Philosophical, Musical, Horological, and Surgical Instruments; Manufacturers—Cotton, Woolen and Worsted, Mixed Fabrics, including Shawls, Silk and Velvet, Flax and Hemp; Tapestry, Floor Cloths, Lace, and Embroidery; Articles of Clothing, for Immediate, Personal or Domestic Use; and the list goes on and on. As one would expect, needlework was well represented—knitting (stockings, Guernsey frocks, and silk purses), Berlin work, cross-stitch, gold and silk embroidery, and quilting.

At least one knitted item won a medal: Sarah Ann Cunliffe’s stunning baby gown, knitted with cotton thread, won a Great Exhibition 1851 bronze medal. The gown is in the collection of the Victoria and Albert Museum in London. A photograph of it accompanies Kathleen Rotella’s article in the November/December 2001 issue of PieceWork. 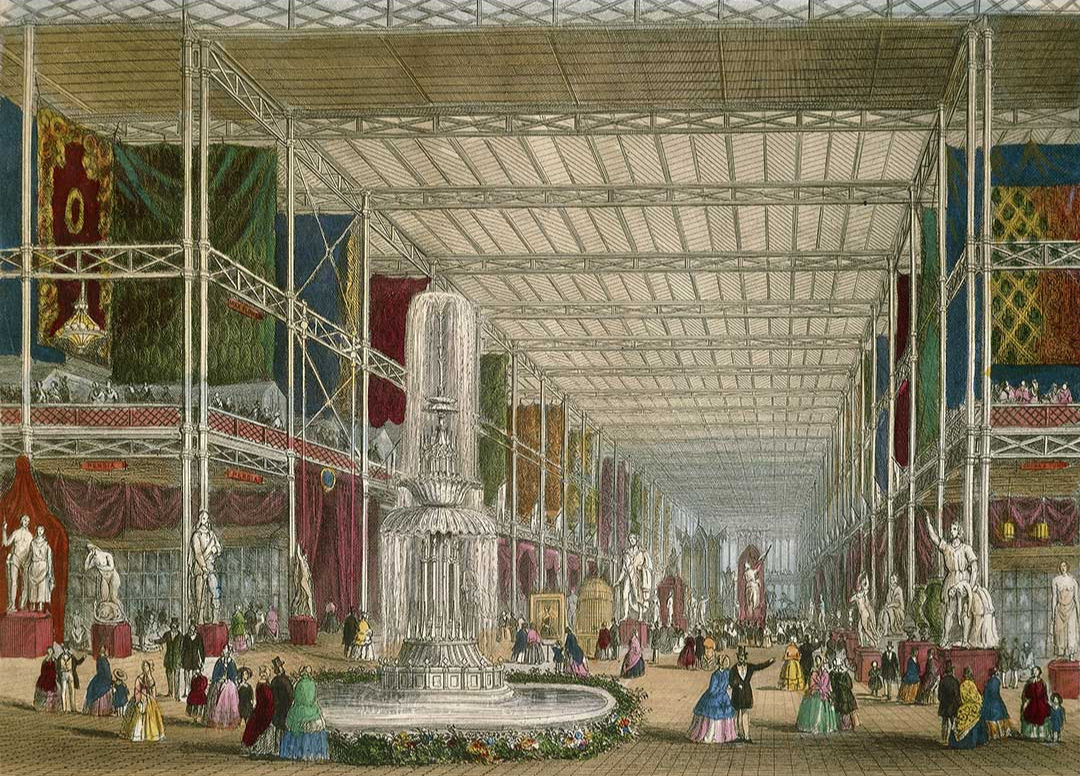 The Great Exhibition at the Crystal Palace in London, 1851. Photo by DeAgostini/Getty Images.

Both Queen Victoria and Prince Albert had their own displays. The queen’s included “a Berlin-wool carpet executed by one hundred and fifty ladies of Great Britain”; Albert’s included “two brocaded dresses manufactured by T. Gregory and Brothers. . . . The weft of cashmere wool shorn from goats kept by H.R.H. Prince Albert, in Windsor Park. The warp is of silk.

The Hathi Trust Digital Library has a copy of the Official Catalogue of the Great Exhibition of the Works of Industry of All Nations, 1851, which includes every exhibit with a list of their wares. You can view it here.

Illustrated plate showing items from one of India’s stands, taken from Dickinson’s Comprehensive Pictures of The Great Exhibition (1854). Prominent objects on display included a needlework carpet cover from Lahore and a bed from Cashmere with a bedstead of solid silver. Photo by SSPL/Getty Images.

The scope of the Great Exhibition is mind-boggling. By the time it closed on October 15, 1851, more than 6 million people had visited. I can’t even imagine what it would have been like to visit in person. And while I am not a fan of time traveling, I would jump at the chance to time travel to London to visit the Great Exhibition. What a marvelous PieceWork tour that would have been!

To all involved in The Great Exhibition of the Works of Industry of All Nations, bravo.