A visit with a favorite vintage find.

Guess who? Peek-a-boo! Image by Homemaker from Pixabay.com.

They may peek out from under old linens at a flea market or perch on a bookshelf in an antique mall. They might be tall, lanky, and squishy, or short and densely packed with stuffing. Some have sweet stitched eyelashes and others wear hats. But all of these stuffed animals have one distinguishing characteristic: the expressive red mouth created from the heel of the sock.

Sock monkeys have played a prominent role in our rich history of Americana toys. They were very popular during the Baby Boomer Era of the 1950s and 1960s. Currently, a multitude of mass-produced stuffed monkeys are on the market, but initially, each sock monkey was fashioned individually from a pair of brown and white cotton work socks.

Besides being home to the Rockford Peaches, the 1940s women’s baseball team highlighted in the 1992 film, A League of Their Own, Rockford, Illinois, is the official home of the sock monkey. It was here that John Nelson (1830-1883), a Swedish immigrant, settled in 1857, and during the industrialization heyday of America, opened a knitting mill (1870) that ultimately specialized in making the iconic Red Heel® socks that became the raw material for millions of monkeys. The town supported a large sock knitting industry. By 1917, when the United States entered World War I, it had five knitting companies producing up to 15,000 pairs per day. In 1932, Nelson Knitting incorporated red yarn into the heels of their socks so as to stand out from similar socks that were being churned out. They called their modification the “De-Tec-Tip,” now known as the Rockford Red Heel®. 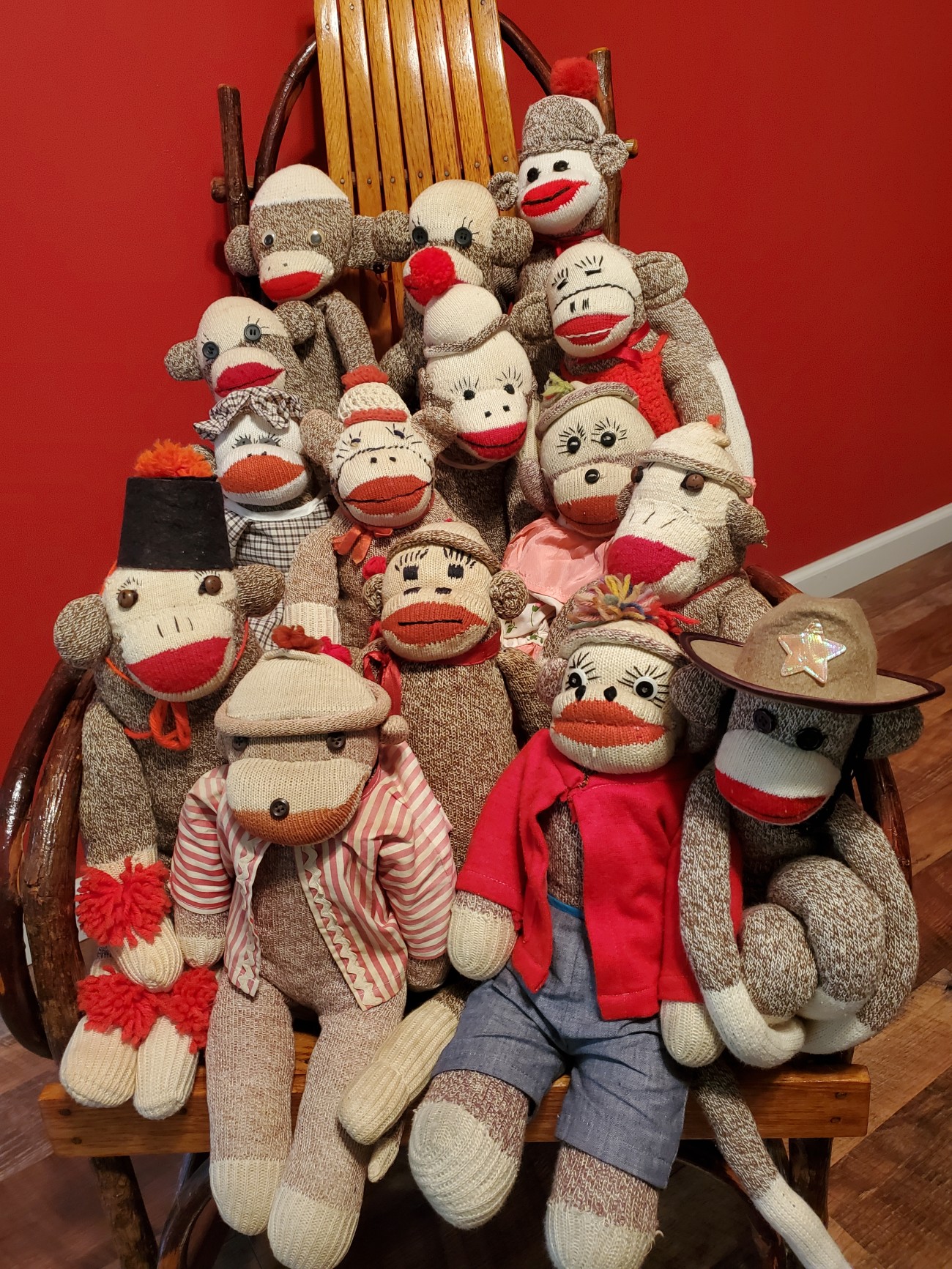 Because of this distinctive detail, some sources speculate that the sock monkey originated during the Great Depression of the 1930s, thanks to the thrifty, creative resourcefulness of seamstresses at that time. And although this feels like a legitimate assertion, official legal documentation marks February, 1951, as the official birth of the sock monkey. The patent was awarded to Nelson Knitting Mill in 1955. Since then, the company has included a copy of the pattern in the packaging of every pair of Rockford Red Heel® socks sold. The patent expired in 1970, and the design is now in public domain. Although Fox River Mills purchased the Nelson Knitting Company in 1992, the iconic socks are still available today. The Midway Village Museum in Rockford, Illinois, traces the history of the Nelson Knitting Mill, and also houses a large collection of sock monkeys, including several six-foot-tall fiberglass art monkeys from a village-wide promotion in 2004-2005. Another resident of the museum is “Nelson,” the world’s largest sock monkey, made from 44 Rockford Red Heel® socks. He stands 7 feet, 2 inches tall, including his tail. As a way of embracing their history, Rockford also sponsors an annual Sock Monkey Madness festival in early March. Monkey and book on making more sock toys. What kind of critter would you create?

In a resurgence of recognition, the humble sock monkey has soared into modern popular culture and has since earned a cameo movie appearance (Cabin Boy, 1994) along with co-starring in a 2010 Kia Sorrento commercial. There are also a multitude of books chronicling their adventures, as well as portrait prints, greeting cards, T-shirts, and numerous other promotional items. In recent years, I have found myself drawn to these endearing characters and the unique personalities instilled in each by their creators. Whatever the reason, I have fallen under their captivating spell.

Kathy Augustine has accidentally adopted the occasional monkey that has jumped into her arms during her travels through antique markets. She and her husband live in Pennsylvania along with the monkeys, a dog, a few cats, an angora goat, and a spinner’s small flock of sheep.