A showman as well as a fashion designer, Paul Poiret was known in Paris as “Le Magnifique” and in America as the “King of Fashion.”

Historians of haute couture often associate designers with specific fashion eras: every lady wanted a Worth ball gown in the Victorian period, a sporty ensemble from Coco Chanel after World War I, or a “New Look” suit from Christian Dior after World War II. The Belle Époque, which ended in 1914, belonged to Paul Poiret (1879–1944).

A showman as well as a fashion designer, Paul was known in Paris as “Le Magnifique” and in America as the “King of Fashion.” During his career, he dressed everyone who was anyone—and who could afford his prices— across Europe and the United States. Clients ran the gamut from entertainers Isadora Duncan and Josephine Baker to American art patrons Peggy Guggenheim and Gertrude Whitney. Paul Poiret set the stage for new approaches to fashion, both in his designs and in his flamboyant approach to business.

Paul’s “modern style” simultaneously freed women from the corset and shackled them with the hobble skirt. His loose-fitting gowns, tunics, and harem pants became wildly popular, although they ignited some controversy in their early days. Even his construction techniques stood out: he invented a method known today as draping, where the designer hangs fabric on a dress form and manipulates it, rather than laying it flat on a table to cut pattern pieces. Paul found inspiration in clothing from all time periods and all places. His designs borrowed from Classical Antiquity, European folk costume, Japanese kimonos, and North African caftans, as well as contemporary trends in modern art, theater, and ballet. 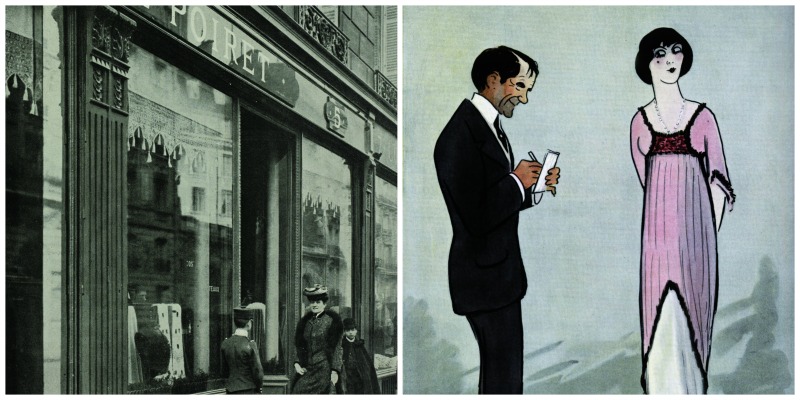 Left: Outside Paul Poiret’s fashion house, a model wears a Poiret ensemble. In 1904, Paul’s fashions had not yet broken away from traditional styles. Photo by Cautin and Berger, from Le Figaro-Modes, No. 14, February 1904; photo courtesy of Getty Images.
Right: French comedian Eve Lavalliere (1866–1929) wearing a Poiret high-waisted gown that dates from his Directoire/Empire phase (1906 to 1911). Drawing from French paper Le Theatre, November 1910; photo courtesy of Apic/ Getty Images.

In some ways, Paul seemed destined for fashion and a flamboyant lifestyle. He was born in Paris to a cloth merchant; in his autobiography, Paul noted that he loved to go shopping with his mother and enjoyed the rich scent of women’s perfume. At his family’s country house outside of Paris, he experimented with flowers and leaves, trying to make his own perfumes and natural watercolors. His sisters bought him a small wooden mannequin that he used to fashion clothing. He organized elaborate parties for his family. He was enchanted by the gramophone, electricity, and the automobiles he saw at the Paris Exhibition of 1889.

Paul’s first job was working for an umbrella manufacturer; he delivered wares across Paris during the day and created fantastic designs at night. He eventually summoned the courage to show some of his designs to several Parisian fashion houses and sold twelve of his designs to Louise Chéruit. Then he used his earnings to hire cabs for his umbrella deliveries—a sign of the financial extravagance that ultimately left him bankrupt. 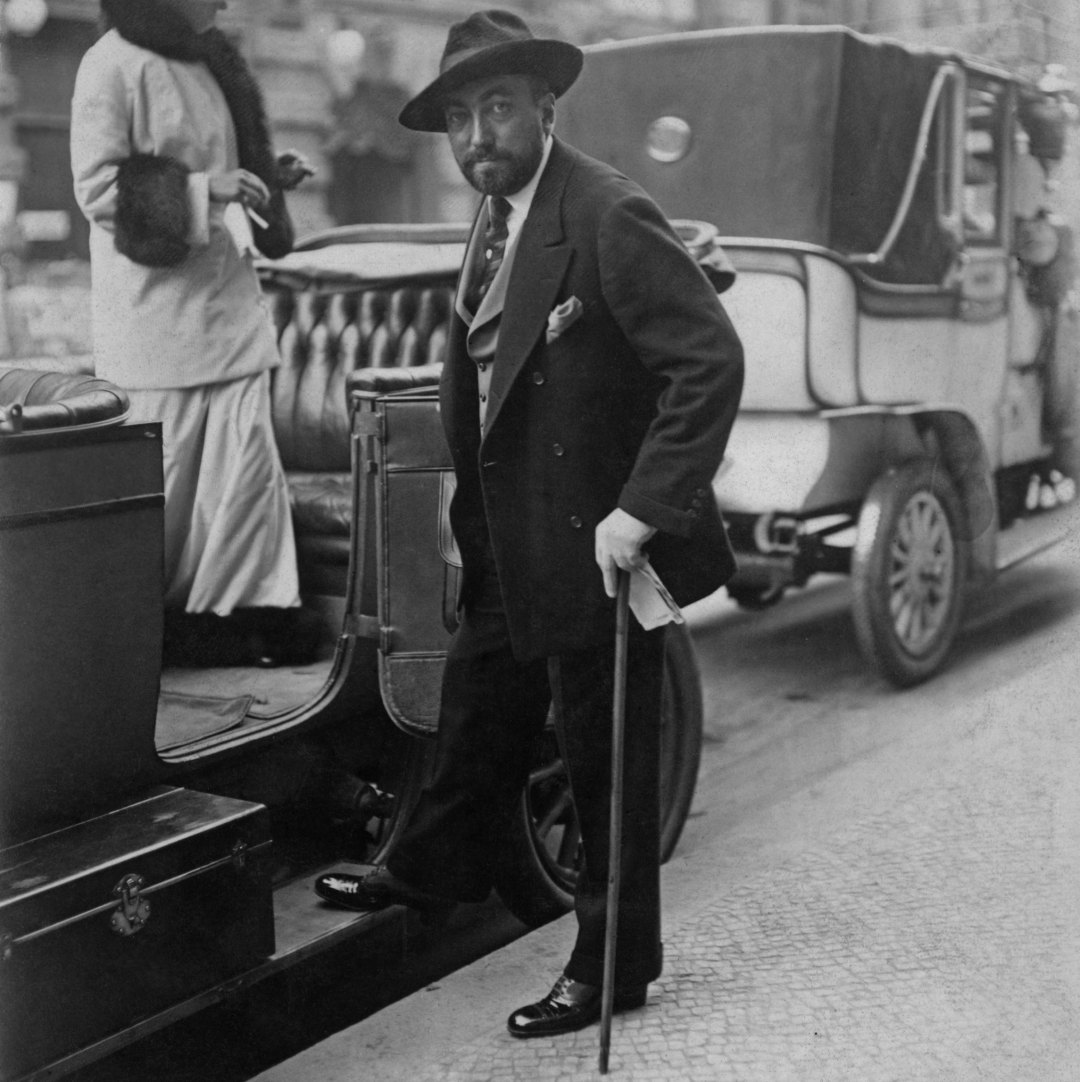 Paul visiting Berlin in 1912 with his latest designs. Photo by Paul Thompson/FPG/Getty Images.

Paul did not deliver umbrellas for long. In 1898, Jacques Doucet of the Maison Doucet fashion house hired Paul to work exclusively for him. As head of the tailoring department, Paul dressed fashionable ladies and ballet corps dancers. According to Paul’s autobiography, Doucet paid him a monthly salary of 500 francs (about $2,600 today). Paul spent his first month’s pay on gold and opal cufflinks. He left Maison Doucet in 1901, when Jacques discovered his moonlighting: Paul, taken as a lover by an American woman, also designed clothes for her on the side. Paul always credited Doucet with starting his career, despite their falling-out.

After spending 10 months in mandatory military service, Paul joined the House of Worth, now run by Charles Worth’s sons Jean and Gaston. They wanted him to design simple and practical dresses for their clients, a reflection of the growing liberation of women. Gaston Worth told him, “Sometimes princesses take the omnibus, and go on foot in the streets.” 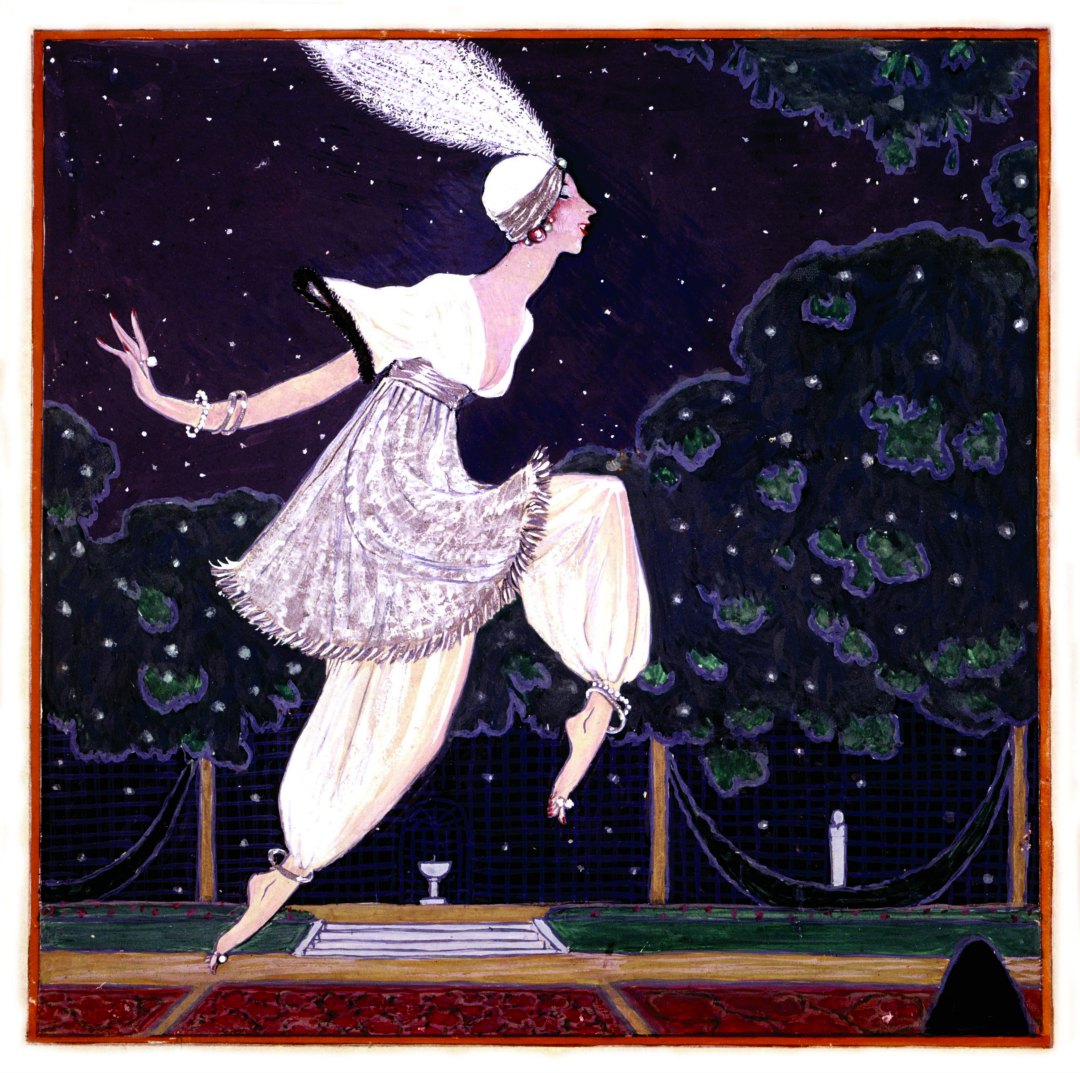 Georges Lepape elevated fashion to a high art in his illustrations for Paul Poiret. Here, he depicted Denise Poiret in her Persian harem pants, tunic, and turban. Private collection; photo by Photo12/UIG via Getty Images.

In 1903, Paul left the House of Worth to start his own fashion house on the rue Auber, supported by money from his mother. He set out to entice customers by creating lavish window displays, a unique marketing approach at the time. He recognized the windows’ success in his autobiography: “When it snowed, I called up all the faery of winter by white cloths and tulles and muslins intermingled with dead branches, and I dress the passing moment with an appositeness that ravished all who walked by on the street.” These eye-catching displays were just one of his innovative efforts to promote his brand.

Two years later, he married Denise Boulet. Like Paul, she had a background related to fashion: her father was a provincial textile retailer in Normandy. She gave birth to 5 children and she served as Paul’s muse. He told Vogue magazine in 1913, “My wife is the inspiration for all my creations, she is the expression of all my ideals.” Between 1906 and 1911, Paul designed high-waisted clothing that harkened back to fashions from the early nineteenth century (picture Jane Austen’s heroines), yet he promoted these designs in a groundbreaking way: as an artform.

Bonnie-Lynn Nadzeika lives in northern New Jersey and enjoys writing, knitting, needlework, and combining them all with her love of history. Featured Image: Paul Poiret mixes a fragrance in his shop. Vanity Fair 1919; photo by Delphi/Condé Nast via Getty Images.