Dean William Webster, the long-term spiritual leader of the village of New Pitsligo, noticed the lacemaking activities and suggested to the current laird that the lacemakers’ income could be increased if they were taught to produce finer-quality lace.

Queen Victoria, accompanied by Prince Albert and their children, opens the Great Exhibition in the Crystal Palace, Hyde Park, London, May 1851. Detail from the official painting by Henry Courtney Selous. The two children standing next to Queen Victoria are the Prince of Wales and the Princess Royal. It was reported that the Princess Royal’s dress for this occasion was made of New Pitsligo lace. Photograph by Hulton Archive/Getty Images.

Bonnie Scotland! Bagpipes and porridge, kilts and sporrans—and bobbin lace. Hidden away in Aberdeenshire in North East Scotland lies the “Granite Village” of New Pitsligo. The land in the area was owned by the Lords Pitsligo from 1633 until the fourth and last lord supported the losing side in the Jacobite Rebellion of 1745, the unsuccessful attempt by Bonnie Prince Charlie (1720–1788) to gain the English throne. Portions of the estate then went to Sir William Forbes of Monymusk (1739–1806), a wealthy Edinburgh banker and grand-nephew of Lord Pitsligo.

It was Sir William who created the village of New Pitsligo, expanding the existing hamlet of Cyaak (the residents still refer to themselves as “Cyaakers”). Settlers were encouraged with offers of cheap land, access to granite to build homes (many villagers worked in the granite quarry), and locally dug peat to heat them. At one time New Pitsligo, with a population of two thousand, boasted of being the largest village in Scotland.

Opinions as to the origin of lacemaking in the village are divided, although there is a consensus that the Forbes family promoted and encouraged the industry as a source of extra income, particularly for female villagers. Some have suggested that Lady Forbes (Elizabeth Hay; unknown–1789) brought a lacemaker or lacemakers from her estates in North Devon to instruct in the finer lace arts. But in fact, theories abound.

Some have pointed to a cobbler who moved to the village from the nearby town of Turriff; his wife, being proficient in lacemaking, instructed villagers free of charge. Others suggest that the art came to the village with a woman from the Aberdeenshire township of Huntly (previously known as Milton of Strathbogie and home of the Gordon Highlanders Regiment). The final theory is that Sir John Stuart Forbes (1804–1866) engaged a woman who had been a lady’s maid in France to enhance the villagers’ skills. Helen G. Souter (dates unknown), who published the article “Scottish Lace-Making” in The People’s Friend, a Scottish women’s weekly, was drawn to this theory; the article was reprinted in the New Zealand newspaper, the Oamaru Mail in September 5, 1903. According to Souter, an eighty-seven-year-old New Pitsligo woman at the end of the nineteenth century confirmed the French lady’s maid origin. The fact that makers work the lace with the foot on the left in Continental fashion offers further support.

Dean William Webster (1810–1896), the long-term spiritual leader of the village of New Pitsligo, noticed the lacemaking activities and suggested to the current laird that the lacemakers’ income could be increased if they were taught to produce finer-quality lace. Through his efforts and those of his wife, Mary (1818–1901), New Pitsligo lace developed as a rural industry. Mary Webster was responsible for sales and the acquisition of materials. Much of the thread used was acquired from J. & P. Coats of Paisley. Mrs. Webster’s sample book contains 203 patterns, each numbered, priced, and available to order. The book is now in the collection of New Pitsligo resident Sheila Joss. In 1849, Dean Webster traveled to Balmoral and presented samples of New Pitsligo lace to Sarah, Baroness Lyttelton (1787–1870), lady-in-waiting to Queen Victoria (1819–1901), who took a keen interest and recommended the product to the queen. This resulted in a large order, the major part consisting of lace in a pattern later referred to as the Queen’s Insertion. 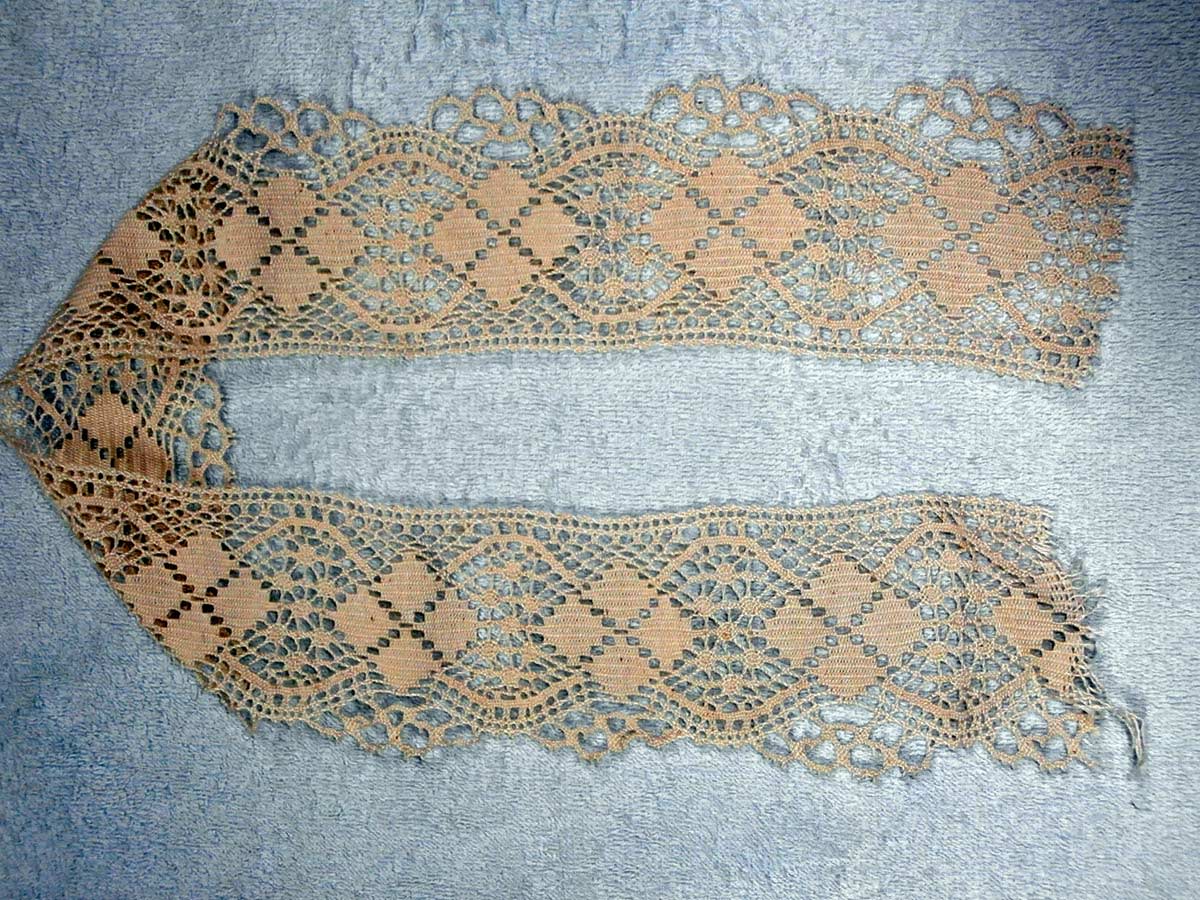 The following year, Queen Victoria sent money to the lacemakers of New Pitsligo, requesting that they make lace up to the value of her contribution. One result was a dress for the queen’s daughter—the Princess Royal Victoria Adelaide Mary Louisa (1840–1901). The Princess Royal wore the dress with New Pitsligo lace to the opening of the 1851 Great Exhibition at the Crystal Palace in London. Another dress contained lace insertions at three shillings per yard and lace for flounces at twelve shillings per yard. Queen Victoria’s sixth child, Princess Louise, Duchess of Argyll (1848–1939), who married on March 21, 1871, had her trousseau trimmed with New Pisligo edgings and insertions. Victoria’s seventh child, Prince Arthur, Duke of Connaught and Strathearn (1850–1942), was christened in a cap made of New Pitsligo lace.

The enthusiasm for New Pitsligo lace did not reside solely with the Royal Family but extended to members of the nobility and the higher echelons of society. Among those who wore the lace were Mabel Ogilvy, Countess of Airlie (1866–1956); Charlotte Montagu Douglas Scott, Duchess of Buccleuch (1811–1895), who served as Mistress of the Robes to Queen Victoria from 1841 to 1846; and Louise Whitfield Carnegie (1857–1946), wife of Andrew Carnegie (1835–1919), the Scottish-American industrialist and philanthropist. Helen Souter mentions in her article that she spent time at the parsonage in the company of the Reverend Edmund James Petrie (dates unknown), Dean Webster’s successor in New Pitsligo after Webster was made dean of Aberdeen and Orkney. Petrie also took a keen interest in the village’s lacemaking enterprise, ably assisted by his wife. Mrs. Petrie (dates unknown) was active in obtaining supplies of thread and other sundries for the workers at cost, procuring orders, attending to related correspondence, and overseeing the dispatch and distribution of the finished lace.

As the art of lacemaking became established in the village of New Pitsligo during the early part of the nineteenth century, the quality of the lace improved, particularly under the tutelage of the French maid the laird Sir John Stewart Forbes engaged. As Souter describes, new stitches were introduced to which the villagers appended names such as “flooerin” and “seedin,” and patterns gained specific names: Jumpin’ Jacks, Cookie, Ox Eye, Goloch, Mrs Leask’s Hankie, Betsy Creugan, Hanging Seeds, Spider and Diamond, Lady’s Fan, Bird’s Eye, Queen’s Fan, Madagascar, and Rose and Pineapple. According to Souter, the names were apparently bestowed by a woman named Margaret Scott, who at the time of the article had “long since gone over to the great majority.” (Is this perhaps the Margaret Scott listed in the 1871 Scottish census as being a former domestic servant aged fifty-six years, who was living with her brother James, a blacksmith in New Pitsligo?) 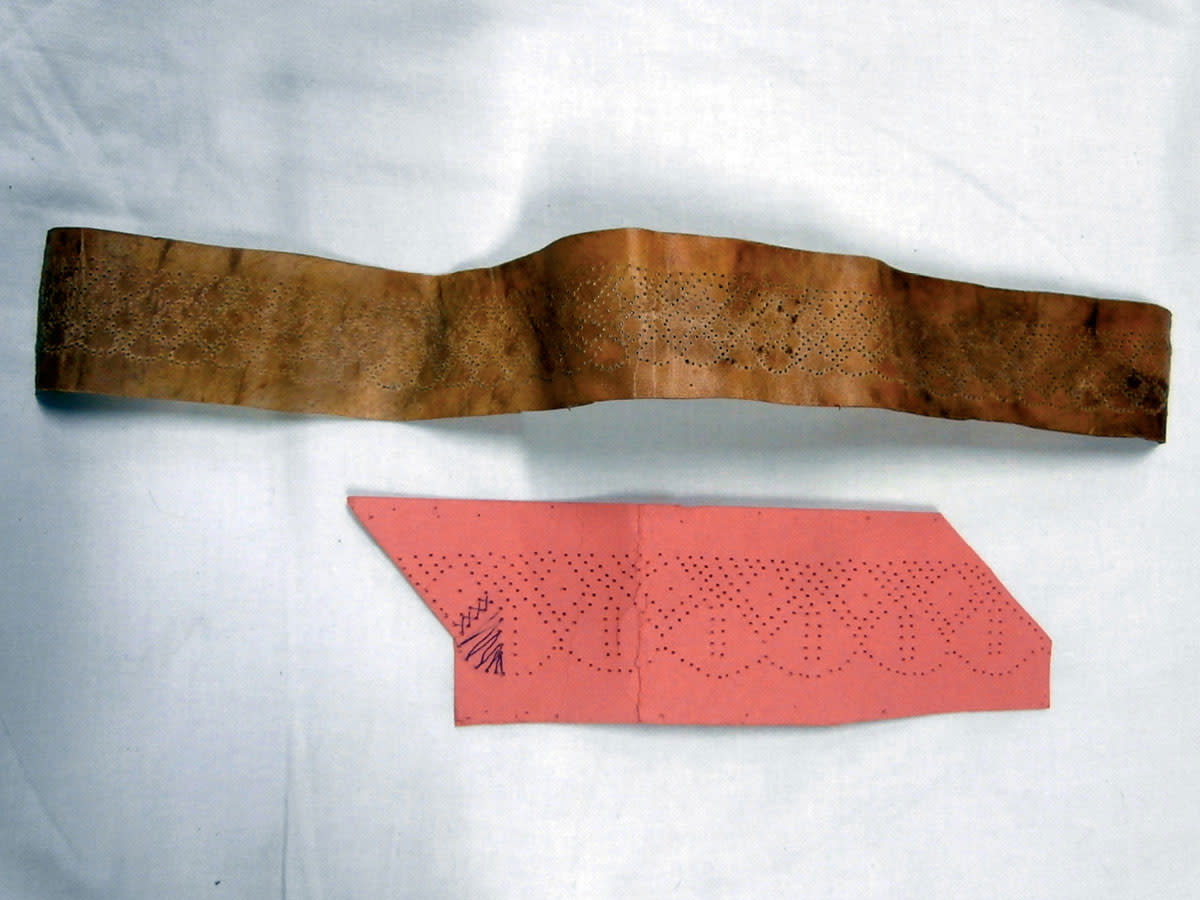 At the height of the lace’s popularity, between the middle and the end of the nineteenth century, it was estimated that 150 women were engaged in lacemaking in the village during the winter months (this number was reduced during the summer when the women’s attention was required for other activities). Women who worked reasonably industriously could expect an income of four to five shillings per week, not a fortune, but better than some other home industries. For example, a stocking weaver working in worsted could expect only half of that remuneration.

The introduction of the 1872 Scottish Education Act, which severely regulated the curriculum in favor of more academic pursuits (and incidentally banned the speaking of Gaelic), seriously curtailed the teaching of lacemaking in the schools. By the beginning of the twentieth century, the number of regular lacemakers had dwindled to forty or fifty. By the start of World War I (1914–1918), New Pitsligo lace was largely superseded by machine-made lace and cheap imports.

By dint of local effort, however, the skills and patterns—entirely without written instructions—were handed down to keep the lacemaking art alive, a responsibility that resided with a handful of dedicated lacemakers. Although the market for handmade lace disappeared, the few remaining lacemakers continued making lace for their own use and that of friends and relations.

In 1954, the situation took a turn for the better, thanks to the efforts of Mrs. Dora Rettle of New Pitsligo, who inaugurated weekly evening lessons at New Pitsligo School, with the assistance of an early student, Miss Helen Mackie. Also, Mrs. Ethel Begg, of Begg’s Shoe Shop at 54 High Street, who was featured in a local newspaper, made lace in the shoe shop during quiet moments.

The current New Pitsligo Lace Club, which was formed in 1981 from a previous evening class of the 1970s, meets on Thursday evenings at the local school. The club—now organized by Sheila Joss—boasts nine young girls, one young boy, and twelve women. All the children are from New Pitsligo, as are seven of the women; the others are from the surrounding area. 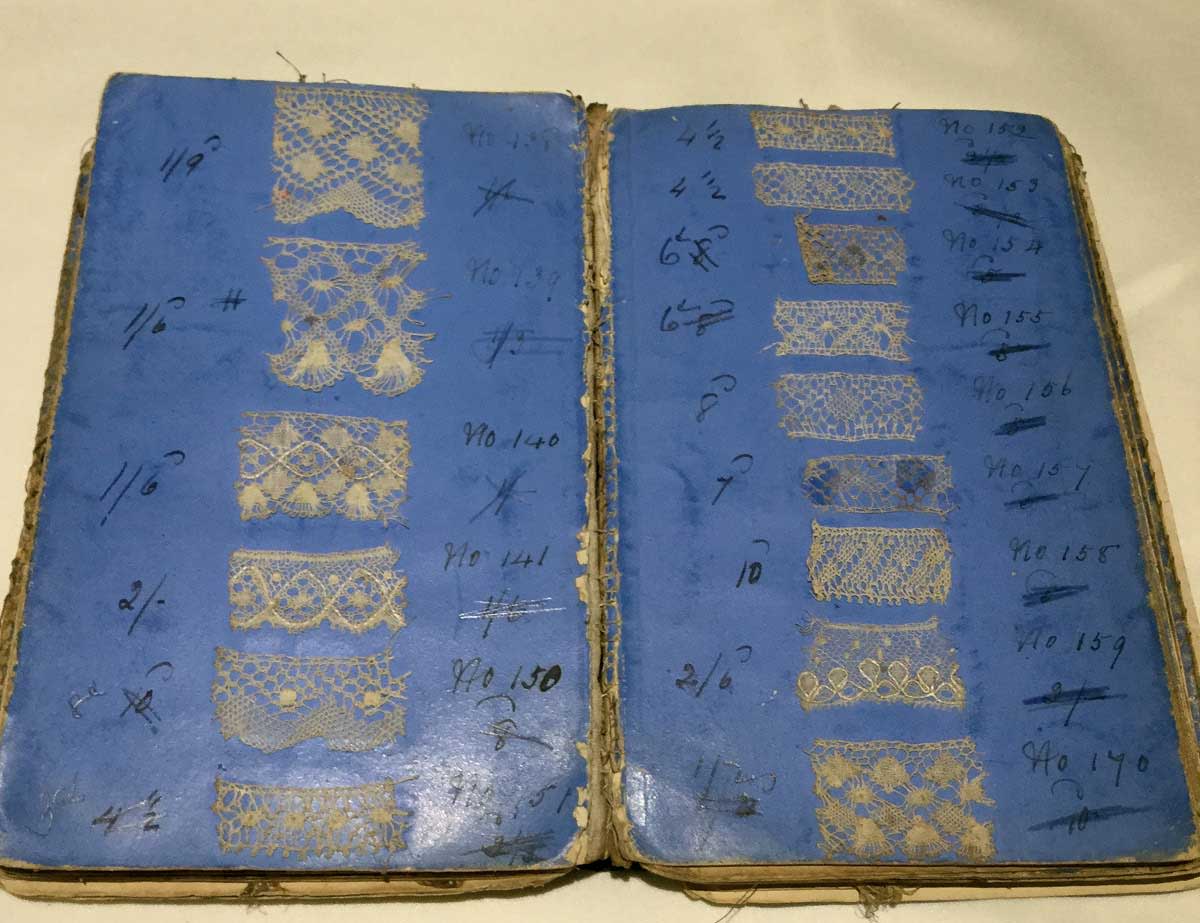 A page from the New Pitsligo sample book that belonged to Mary Webster. Circa nineteenth–early twentieth century. Collection of Sheila Joss. Photograph by Sheila Joss.

Traditionally, New Pitsligo lace was made on a standard bolster-style pillow. However, a transition to a Continental-style flat pillow with a roller took place in the late 1970s, and it is now the preferred equipment for all except beginners. The explanation for this change is simple: the flat pillow with roller is easier to work with! Perhaps because of New Pitsligo’s isolation, both the pillows and the simple yet graceful unadorned Continental-style bobbins are made locally.

Far away from the more famous centers of lacemaking in Great Britain, New Pitsligo lace continues. It has been supported and handed down from generation to generation.

Christopher John Brooke Phillips was born in England and now lives with his wife, Patricia Ann, near Valencia, Spain. A retired businessman, he researches and writes on matters of historical interest. Two historical novels set in the twentieth century are in the works. He especially thanks and acknowledges Sheila Joss, New Pitsligo, Scotland.