Between 1676 and 1913, proceedings at the Old Bailey record more than 2,000 cases of stealing lace or a theft that included lace, showing its high value and its attraction for thieves.

We may think romantically of the traditional highwayman, with hat cocked at a jaunty angle, sitting astride his coal-black steed, crying “Stand and deliver!” He would then quickly relieve the lady of her baubles and the gentleman of his purse. Yet the truth yields little such romance. A thief’s life was often short— one of squalor, petty theft, pilfering—ending on the gallows. Throughout the British Isles, a dark criminal underworld existed that consisted of pickpockets, fences, prostitutes, shoplifters, muggers, opportunists, and dishonest servants. We may recall such famous fictional characters as Fagin or Moll Flanders, but their offenses were but the fictional tip of a real iceberg, one that had existed for centuries. And one that involved copious quantities of lace. 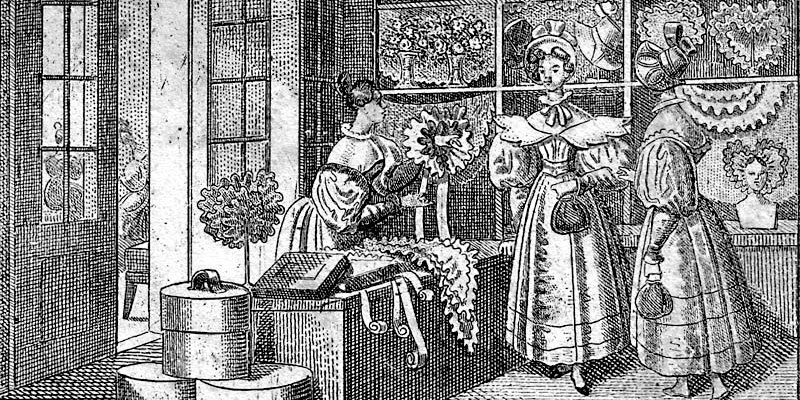 Between 1676 and 1913, proceedings at the Old Bailey record more than 2,000 cases involving the theft of lace or a theft that included lace, showing its high value and its attraction for thieves. Fashion dictated lace’s popularity and its correspondingly high price. Its availability, portability, and ease of disposal made it a desirable target for both career criminals and casual opportunists.

Lace thieves made their money through fences who operated in public houses, retailers not overly concerned as to provenance, and various street markets, in particular Rag Fair, the London market, already in existence in 1503. Bounded by Houndsditch, Leadenhall Street, and St. Mary Axe, Rag Fair became an exchange for every type of garment, boot, shoe, hat, and fashion accessory. If an item of apparel, a bolt of cloth, or a card of lace went missing, Rag Fair was the place to look first. 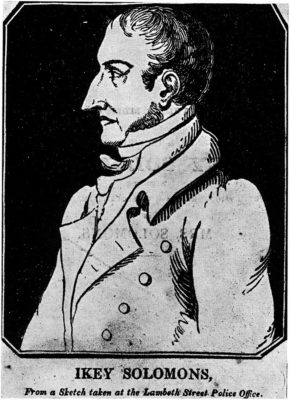 Isaac “Ikey” Solomon, born in Houndsditch, was an early-nineteenth-century pawnbroker and fence. Tried at the Old Bailey in June 1810 for theft, he was sentenced to be transported to Australia for life. Inexplicably, he served four years on a Thames River “hulk,” literally a floating prison, and either escaped or was released in error, eventually returning to London in 1818 to take up his old ways. These “ways” caused his arrest in April 1827 for theft and “receiving,” including quantities of lace and bobbinet (tulle netting). He was released from Newgate Prison with the aid of friends and his father-in-law.

Ikey escaped to Denmark, and thence to New York, arriving in August 1827, only to discover that his wife had been arrested in London, convicted of similar offenses, and transported to Tasmania. Determined to join her, he sailed from New York, via Rio de Janeiro, to arrive in Hobart, Tasmania, on October 6, 1828. Many of his criminal acquaintances previously sentenced to transportation immediately recognized him. The lieutenant-governor of Tasmania applied to London for a warrant to arrest him, which arrived in November 1829. Because of a technical fault, the warrant could not be applied, and Ikey was released. The lieutenant-general then issued a warrant, and Ikey was shipped back to London.

Tried and found guilty, he was sentenced to fourteen years transportation, and he arrived in Hobart in November 1831. Freed in 1844, his hope to reestablish family life was not realized, and he died on September 3, 1850. Apart from fencing stolen lace and his notoriety at the time, he is often singled out because it is generally accepted that Isaac “Ikey” Solomon was the basis for Charles Dickens’s character Fagin in Oliver Twist.

From period court records and other accounts: 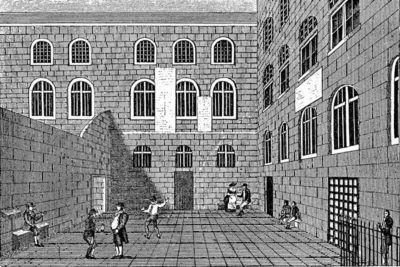 CHRISTOPHER JOHN BROOKE PHILLIPS was born in England and now lives with his wife, Patricia Ann, near Valencia, Spain. A retired businessman, he researches and writes on matters of historical interest. A completed historical novel set in the twentieth century is looking for a publisher; another novel is in the works.