A Closer Look at Chenille

The French named this soft and fluffy yarn and fabric and are believed to have invented it, as well, sometime during the eighteenth century.

One of these yarns is not like the others. The chenille yarn on the left isn’t spun; traditionally, it is woven and cut. Photo by Caleb Young (Good Folk Photography)

Chenille means caterpillar in English, forever linking the fuzzy insects that one day become either a moth or butterfly with fluffy yarn and fabrics. The French word was known early on in the United States and can be found in translations of French periodicals from the eighteenth and nineteenth centuries.

Chenille yarns begin as fabric, with very loosely spun yarns used as the weft in a leno weave fabric. Leno weave, also called gauze, is a fabric in which a pair of warp yarns is twisted over or under the weft and does not alternate passing over and then under the weft yarns as they do in plain weave. Yes, this is complicated—remember that textile production includes some of the most sophisticated machinery ever invented by humans. When dressing the loom, the weaver sets the warp yarns far apart, allowing the fabric to be cut between each pair. This frees the loosely spun wefts to create the fuzz associated with chenille. 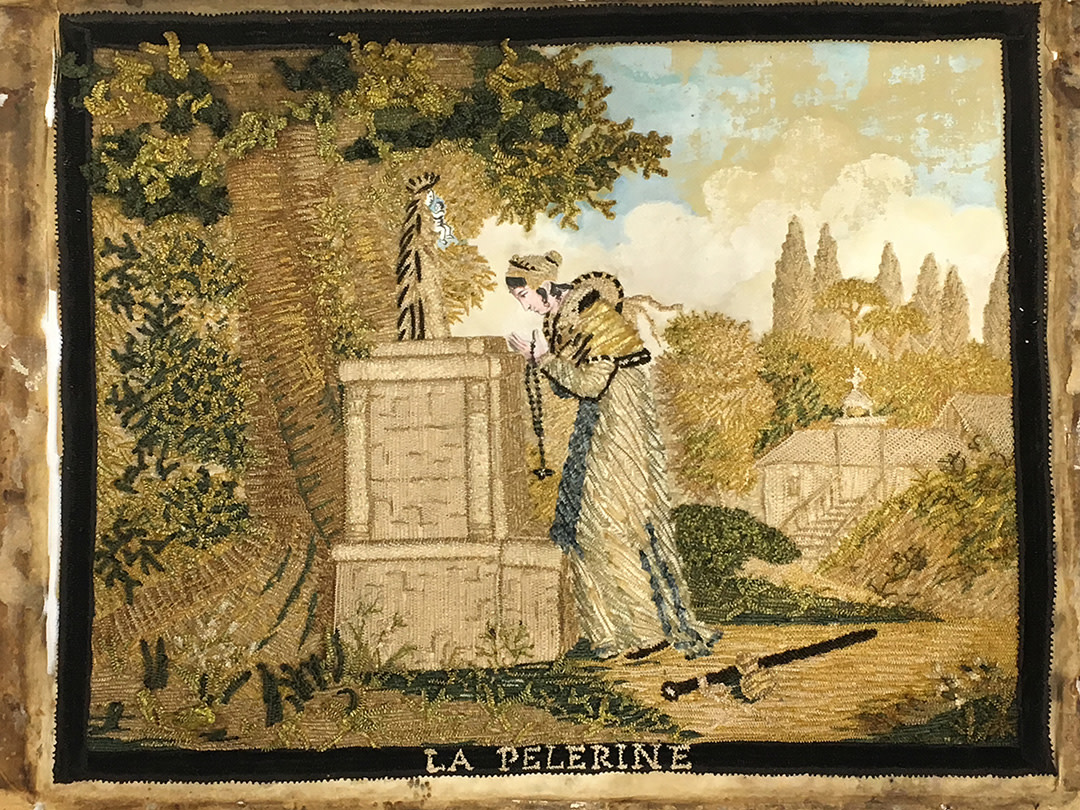 This is an early example of chenille yarn being used in embroidery. La Pelerine. 1810. Accession number URI 2002.12.259. Donated by Robert P. Bainbridge. From the collection of Historic Textile and Costume Collection, University of Rhode Island. Photos by Susan J. Jerome unless otherwise noted 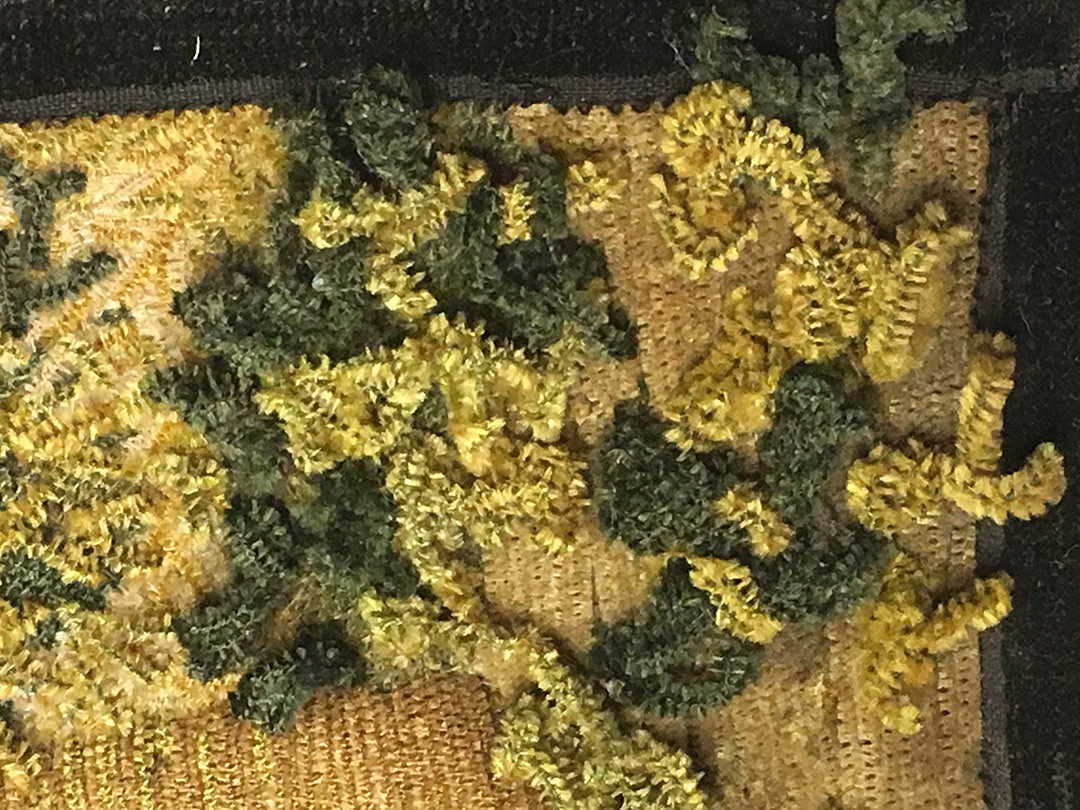 The loose characteristic of chenille yarns makes them difficult to use in weaving. Many early examples of chenille yarns are found in embroideries, where the yarns are couched onto fabric. The sampler above is almost entirely covered with chenille, made with silk weft and possibly linen warps. The linen warps would be strong to withstand the initial weaving process while the silk is more easily dyed and can be loosely spun to create the desired fuzzy effect. The woman who stitched this sampler was very sophisticated in her choice of yarn colors and in the way she laid the yarns flat, in different directions, to depict the varying textures of the plants and trees in the cemetery. 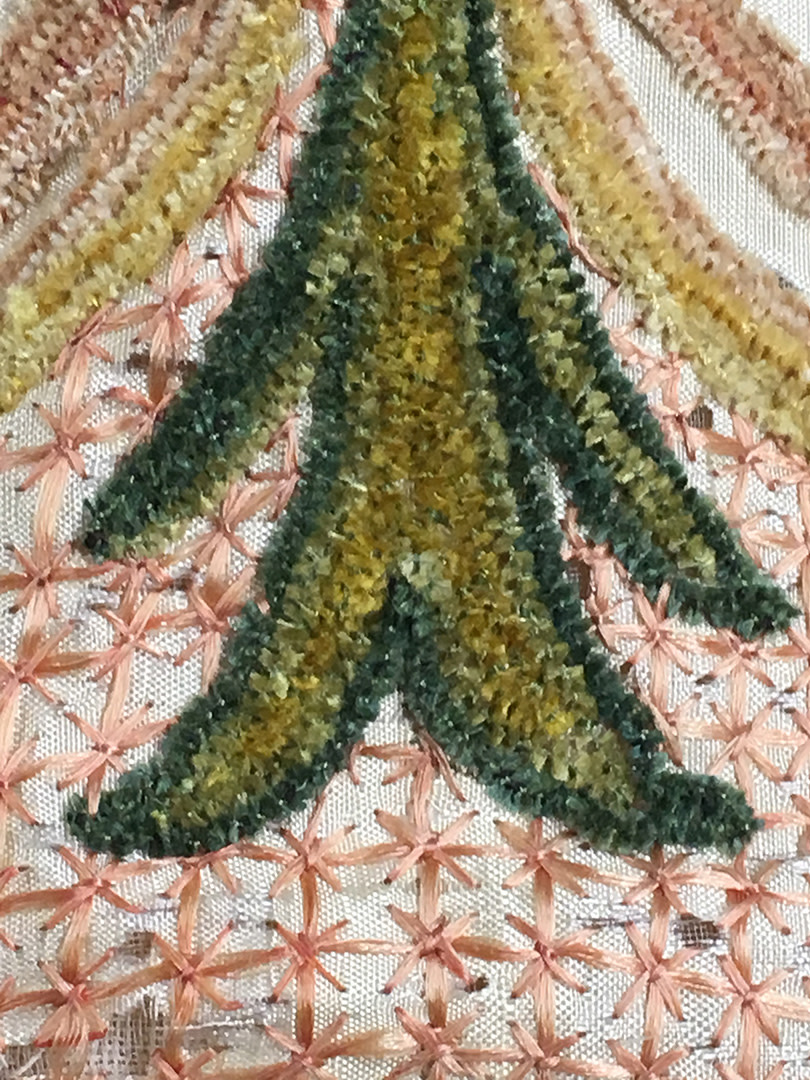 A set of statuary garments in the collection at the University of Rhode Island also demonstrates the use of silk chenille for embroidery, in this instance onto silk. These garments could have been cut down from an adult woman’s outfit and donated to a church for the decoration of a religious statue. The stomacher, sleeves, and skirt are all decorated with pastel-colored chenille stitched onto the silk. 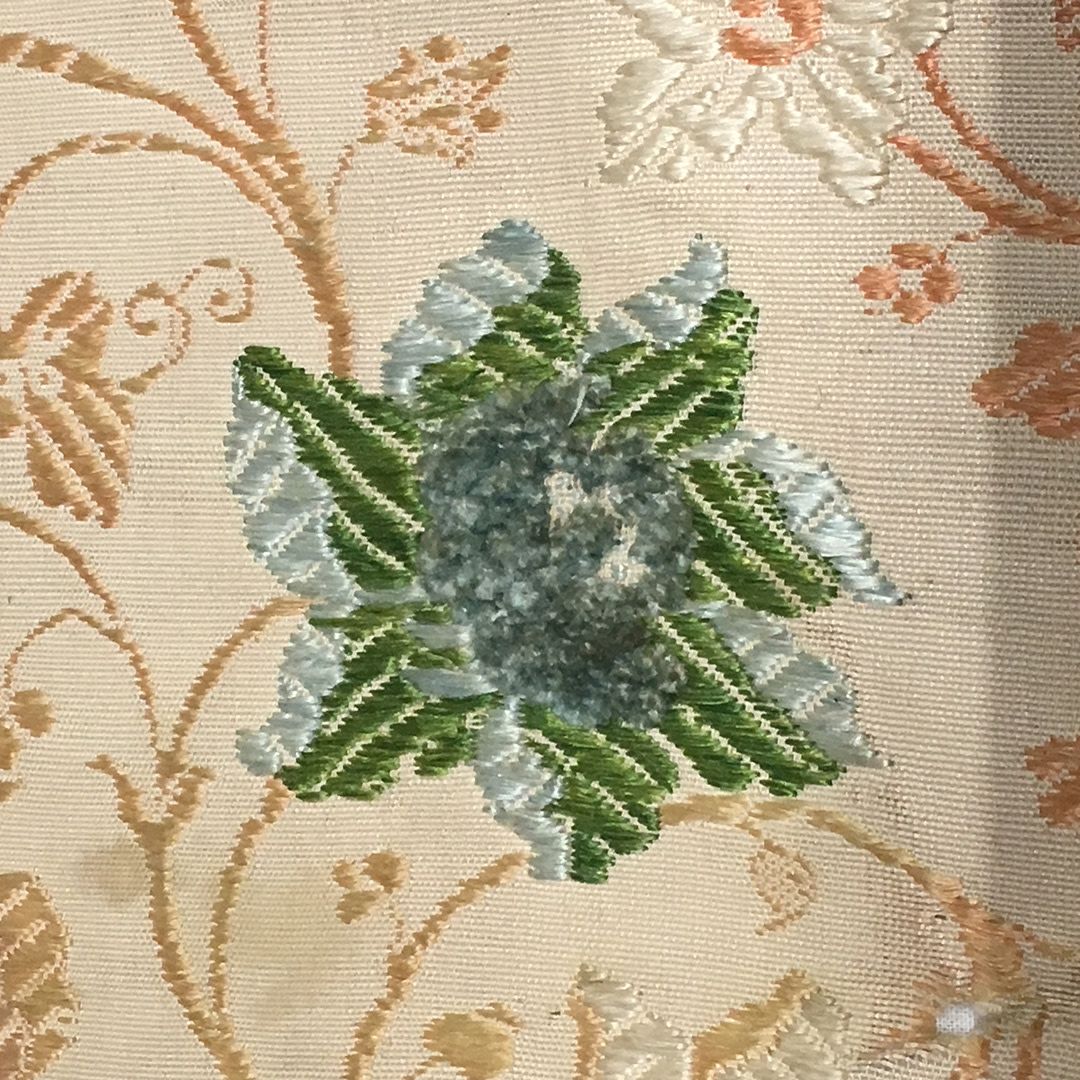 Detail of an eighteenth-century Spanish or Portuguese brocade textile fragment. The chenille has been woven into the center of each flower. Note the loss of the fibers through age and use. 1700s. Accession number URI 1998.16.03. Donated by Rhode Island School of Design. From the collection of Historic Textile and Costume Collection, University of Rhode Island.

Chenille could also be used for weaving, as seen in the example above of an eighteenth century brocade fabric from Spain or Portugal. 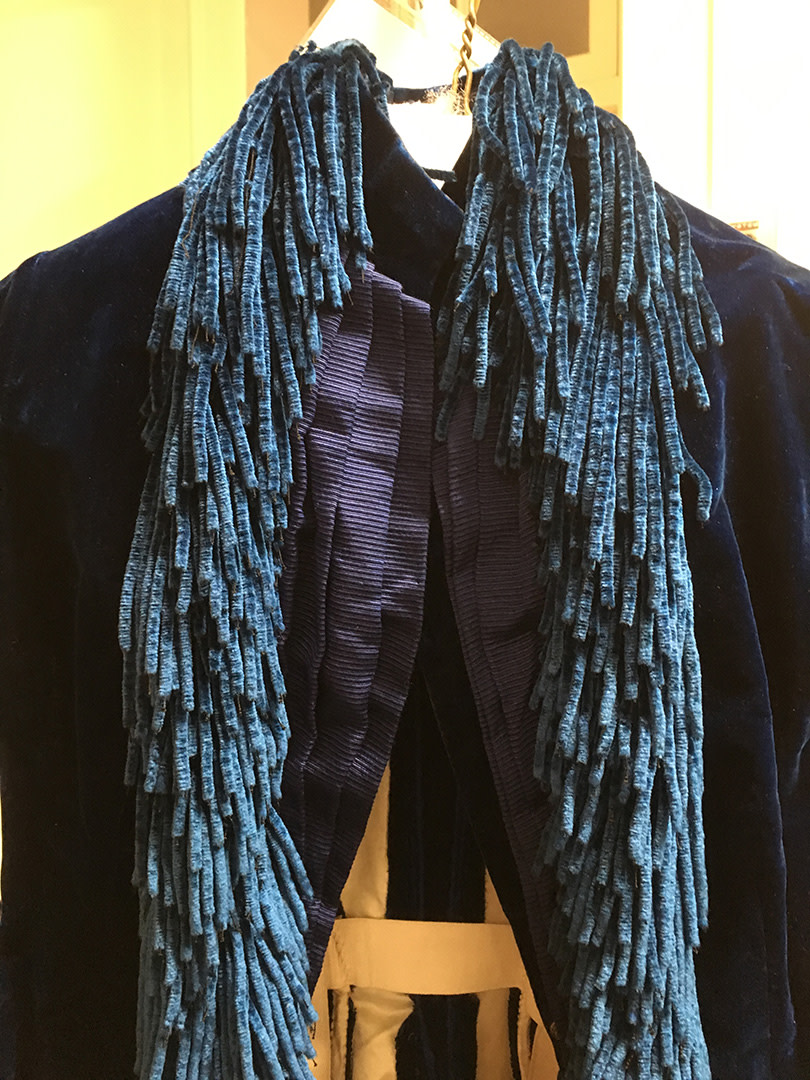 The front of this blue velvet dress bodice, as well as the skirt (not shown), are decorated with long strands of chenille. 1880s. Accession number URI 1996.10.11. Donated by the Mystic Seaport Museum. From the collection of Historic Textile and Costume Collection, University of Rhode Island.

Chenille remained popular in the nineteenth century, and with the advent of water-powered machinery, it could be produced on a large scale for consumption by the ever-expanding middle class. One problem for consumers remained the loss of the weft tufts with age and laundering. This problem was solved when low-melt nylon began to be used for the core of the yarns in the twentieth century. Combined with the comfort of knit fabrics, so popular today, the soft, comforting feel of chenille has guaranteed its continued popularity into the twenty-first century.